We've been building a new home for the last two years and are getting toward the last few months.

I have a question in regards to IR, and cameras with "lightcatcher" or "lightgrabber" etc terms companies use.

For our front door with low light (two sconces), are we better off having a lower MP (e.g. Avigilon 1.3MP) with "Lightcatcher", or is it better to just buy a higher MP with IR built in, or something like the axis P3364 which is 1MP and has IR?

The camera would be facing north, and is covered, so there is no sunlight directly hitting it.

I am struggling because we have around ten cameras on the exterior and they all have different requirments and lighting situations.

The only conclusion I have made so far is our gate camera which I am thinking the Avigilon 3.0W-H3-BO-IR.

I took it with an iPhone and it's angled a little, yes.

The wood pillars are not thicker, no it is an illlusion. That is indeed 90' yes, it is lens distortion making everything look out of whack, plus the illusion of the wall sweeping down is exagerating it all. I didn't really notice that since I was only looking at where the camera is being mounted :)

Thanks for all the assistance. I will have to do some more research before I pick these out.

That picture is trippy! It does the job intended so no complaints, only forensic curiosity. Obviously you didn't have a level place to stand in front of the door, but its more than just one axis that seems out of kilter, maybe coupled with some lens distortion?

If you don't mind me asking, how and where were you standing? Are the wooden pillars divergent or parallel, and are they really thicker at the bottom? The left stone wall where the pillar rests, is that a 90?

I have installed many Avigilon "lightcatcher" cameras.

Very good when you have some light and just like Axis cameras not so good if you have no light.

Following Axis, you can rotate the lens, so ceilling mount should work also...

the Axis IR beamer for this cam is called Axis T90A, see page 5 (accessories) of this document:

You get it optionally with PoE.

Haha, no it was literally I was telling him about camera models and he was not up to date with new models :(

I'm trying to figure out if "beyond my scope" means "I'm overbooked and backlogged and this job isn't profitable enough for me, so I'll blow you off but nicely" or if it means "I don't no nothin about no internetty cameras".

Why would they do that??

My point was that they were just really amazed at the technicals in the house. Our mech room has three racks in it and everything is integrated into the house, it's great.

Our crestron installer likes to integrate with exacqvision, too and prefers everything IP.

I love axis, I've installed them before (maybe less than 100 only, as this is not my field), but it is all an in industral area so it's completely different ballgame for me here.

Not sure why you ask did they offer a comparable analog system.

Well, did they at least offer a comparable analog system?

We are looking to see people who may be attempting to break in through this area, although rare - it happens. I was not aware Avigilon did not sell direct to end users.

I'm having a difficult time finding a knowledgable integrator in the Chicago area. One company came out and I ended up knowing more than he did that he literally told me the job was probably beyond his scope. I was really surprised since there is nothing major here!! Mostly door coverage and some parts of the back of the house to see people on the rear terrace.

Avigilon will not sell direct to endusers. I am not clear if you plan to do this job yourself or hire it out, but keep in mind that channel brands may limit the product you can choose from if you're a DIYer.

For the camera at the front door, is the primary goal for that camera to see people knocking? Or are you wanting to see the approach to the door, ie: a walkway?

Budget is no problem. We are willing to spend whatever amount for the security. We are on 5 acres and in horse country. It's very quiet here and there are no street lights on our street and so it is very dark at night. The problem is we have already wired the home, and are in the last stages of construction (e.g. we're moving in shortly). Are there any alternatives to the Axis that are small with great features? (Avigilon?)

Anyhow, Vigil: The P3363 does not have IR, did you mean the P3364? Using the product finder on axis site, with outdoor ready, day& night, lightfinder and built in IR, all I see if the P3364-LVE. These will all be external ceiling mount, nothing will be on the wall, not sure but I've never mounted one of these on the ceiling?

A lot of great information in the articles, however I need to analyze it and come up with the best solution. As you all know, clients (in this case myself), sometimes want the best, but the most discreet at the same time.

Attached is the front door, you can see the cable hanging down where the camera will be mounted. The front door faces north, and there are two electrical boxes where the sconces will be. This is one of I think 9 or 10 doors... It looks like we will need IR, just to find one with integrated that works will now. 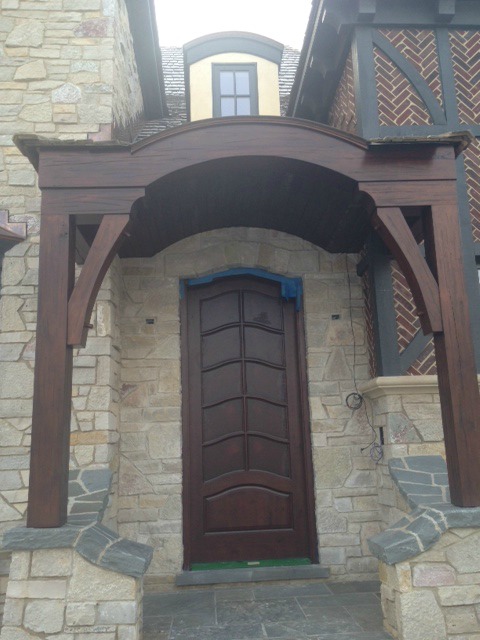 The Axis P3363 has great low light performance and additional IR lights if you want, but that illuminator might be limited in angle/orientation. We'll test that in a few days, but the cam has outstanding results with external IR beamers. If you have only some `foreign` light avilable (street light,...), no IR is needed. I would try to get the cam for demo and see the results... All the best, Patrick

The best option is to use independent IR illuminators such as, to pick a product at random, Axton's AT-16S There's only so many IR LEDs you can cram into a camera, but if you get an independant, stand-alone unit, you can get more LEDs, and those LEDs can be spread out more. This gives you more even lighting (instead of only illuminating the center of the image, which is what happens with integrated IR).

Axis has a nifty tool illustrating the concept, part of their lighting tutorial.

A key consideration here is budget, but since you have cited all high end, expensive cameras, I presume that is not a major barrier?

There's lots of low cost integrated IR cameras, so if you wanted to save money, that would be one route.

In general, though, for high end use, when comparing 'super' low light and integrated IR cameras, the factors are: