Need A Camera Housing To Watch Through A Drive Up Window

Before you all blast me on this one, I know one should never point a camera out a window, unless your dealing with the situation I have been dealt. I am working with a customer and they have a drive up window that they would like to see the faces of the people they are transacting with. The problem is they have a window that runs the entire lenght of the drive up. mounting on the exterior the building is not going to achieve the right angle, and having anything sticking off the wall will cause a mirror slap hazard. The only way I can think to do it would be to shoot through the glass. the current security provide took the easy way out, mounted a box camera on a ceiling mount to the counter and at an angle with the window, essentially gathering forensic detail of the side of the car, and the reflection of the inside of the bank. Has anyone dealt with this before and come up with a justifyable solution?

I'm curious as to why should you never point a camera out a window? I've not heard that before.

Maybe glare or WDR or polarity film is a tech issue, but this isn't some kind of taboo thing, so you can rest at ease... :)

That aside, there are 'covert cams' designed to fit in ATMs (here's an Axis one) and other small spaces like holes drilled through door/ window frames. Mounting one of those at window height might work:

How wide of an area will you need to cover? I'm thinking about 10' by 10' (considering vehicle ride height differences), but don't know how far away the camera would be from vehicles if mounted at the window?

I was actually considering the F series from Axis, and ways to utilize it in this instance. The drive up window is actually attached to the building, not a tube based system, so they pull right up to the side of the building. A 10'X10' area would be desirable, the problem is to achieve the view to look into the vehicle, it would have to be mounted through the glass.

This couldn't be as simple as some rubber gasket and a mount to bud the camera right up to the window would it? 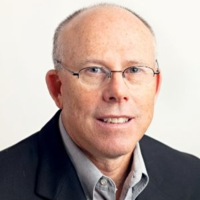 This is a very common application in lobbys as well as your application. Use a camera with good WDR to solve this problem. There are cameras that allow you to see inside and out with difficult lighting.

As I recently worked for a manufacturer I won't recommend any brands but make sure you have a dB rating of 120 or more for the WDR...then test it in your application before final install to be sure it works!

We can go offline if you need a more specific answer.

The Axis Q35 dome would work as well.

A note of caution. I did this in a very big installation but i was concerned about the glass becasue we were using IR illuminators. I called in a glass expert and was told that the glass was made in the 60s so I was OK. Today's glass more often than not will not pass IR in the frequency ranges we need for security cameras (in the Night setting). So if you are planning IR illuminators, to provide infill lighting inside the car, probably should make a test first.

I have used cameras through glass (or acrylic) a number of times. I think the reson why it sometimes is seen as difficult is the reflection issue which can be mitigated by making sure the lens is close (if not actually touching) the glass so no light enteres the space between the two.

What banks are open during hours when it's dark?

At my bank in SoCal, the window is a also night deposit drop. They are also open to 6:00PM everyday, M-F, even thru ecliptic events.

If you choose any solution shooting thru the glass at some distance, it's likely that,

the reflection of the inside of the bank,

can be reduced by the use of a polarizing filter:(the windshield being like the bank glass). 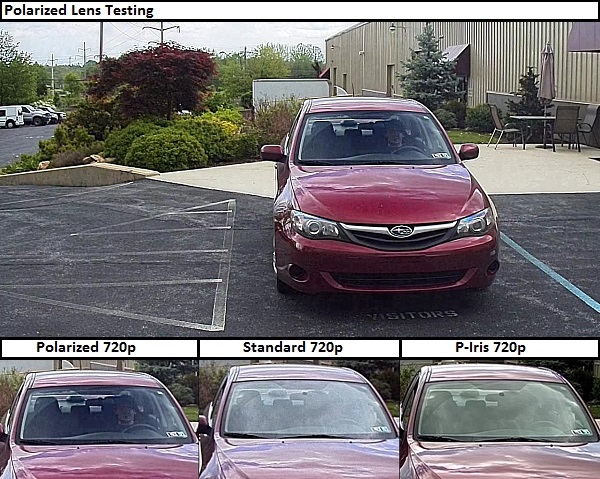 Just remember to account for the polarizer eating up 1-2 stops of usable light.

We use a Bosch Dome on a pedestal mount. Great picture, but we do not use IR. We chose a dome to keep it from being moved by window shades or getting knocked around. We chose the pedestal mount to keep the wires inside the mount and out of the way, and it provides a very sturdy mount at the right height.

When we used box cameras, we used a camera "boot" which snugs up against the glass and blocks the light. But the tellers moved the cameras all the time. We moved to domes.

I have a simular situation where customers walk up to inforamation/farecard windows. A 180° has been placed inside the booth providing a view of all customer interactions. Normally the detail from 180° cameras isn't terrific but because the camera is only about 36 inches from transactions, money denominations can be scene and the audio exchange recorded.

We experimented prior to selecting the camera and mounting range. We were literally throwing bills across a table and moving the camera until we were certain we had a solution. The cameras were then mounted on the short wall between operators.

What we don't have to contend with is sunshine because our sales office is ijnside a subway station. You would need to experiment in your own environment. You may want to start with the Axis, OnCam and Scallop. The Axis camera is working for us but some of the other manufacturers are being concidered for outdoor applications.