Should We Test Maglocks? If So, What Kind?

We are ramping Access coverage up with our test door. We recently did an install guide for electric strikes, and we are doing the same for maglocks. 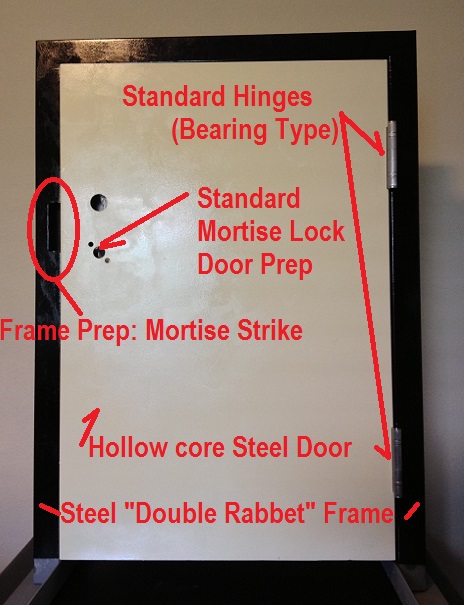 Here is what I'm thinking so far:

1. This will be a semi-permanent piece of hardware we use in multiple tests, so nothing odd (built in CCTV camera, LED readouts, Delayed Egress, etc)
2. Smaller model. No need for a 2700 pound bond, when something modest will fairly represent lock/unlock cycles.
3. Separate power supply will be used. No 'PoE' or 'pass-thru' low current models will be considered
4. Door is a right-hand reverse opening.

5. RTE devices are part of the test door.

Your feedback on specific types or brands you would like us to use are welcome. Most maglocks are built and install relatively the same way, and for the purposes of the guide it will be good general info.

In that same vein, which EAC tests or evaluations would you like to see?

Having installed, replaced, and/or serviced a few dozen maglocks over the years, I can reliably report, they're a pretty simple device and all work pretty much exactly the same - coil is energized, plate clamps to it. Not to be discouraging or anything, just wondering what you would actually test between the different makes and models out there? Actual vs. claimed holding strength? Longevity (I have had some fail over the course of many years)? "Bonus" features like integrated alarm switches, etc.?

As you note, most of them attach pretty much the same way as well, with some minor variations that may or may not make an installer's life easier - that's something that might be of interest. Or not.

If what you are after is a basic installation and testing of the maglocks like your strike presentation, sure, why not?

Testing maglocks is a subject for another basic article. You could test the clamp type, the shear locks and plungers and include the basics of selection for them. The article will be rather anemic if you don't get into the different problems doors present. The door strike article made mention of the metal back box to keep grout away from the lock but told nothing about the contortions you have to go through in order to remove one. Especially the spot welded ones that are installed right next to the jamb frame. Installation of anti pick guards should be included.

I can name several of these maglock install problems you should include, like the aluminum door with the anti sag adjustment rod always being in the way of the sexbolt. The hydraulic door closer arm length should be accounted for before installation. The addition of 1/2 " to 3/4" shim bars to the maglock for a more secure installation. The fishing of power cables into a frame with surrounding glass and enclosed right angled frames and jambs.

Edit: the right hand reverse door will need a Z bracket if the side in the photo is the secure side.

Great feedback, Scott. We appreciate it!

but told nothing about the contortions you have to go through in order to remove one.

We didn't want to make people cry. :) Actually, this is a good idea for it's own update, and I'm adding it to the queue. I'll find an example nasty frame in the field and document how it is prepped.

Again, thanks for the feedback. While our test door is indeed a benign example compared to what you can see in the field, we can address many of the fundamentals, and use it to illustrate those 'widow maker' situations.

like the aluminum door with the anti sag adjustment rod always being in the way of the sexbolt. The hydraulic door closer arm length should be accounted for before installation.

These will surely be mentioned and pictured. Great feedback.

Glass doors, especially frameless Herculite or similar, are just generally a difficult situation for maglocks. We opened the box briefly in this post: Glass Doors and Access Control

This makes me wish I'd taken more time to document over the years, some of the horror shows I've seen... moreso on the service side than installation, since most of my new installs have been pretty standard aluminum frame doors (with a few of the little fun things Scott mentions.

I actually see problems fairly regularly with doors that go crooked or out of square over the years to the point the lock doesn't mate properly, This one is a perfect example: called to site for a maglock that "sometimes" works, the problem turned out to be that the top of the door was bent outward so far, the plate wouldn't usually make contact. I told the site they needed to get a door guy out to fix or replace the door, showed them the problem, then added spacer washers as much as practical to stand the plate out some more from the door... explained to the site what I'd done, and that they would STILL need to get a door guy in. Also explained the problem and temporary fix in my service order notes, AND called the parent company's Building Services contractor to explain it.

I got TWO more calls to the site for the same problem in the next several weeks... each time, same thing, had to explain to someone different what the problem was and that I'd hacked it as much as possible. This last time, I took a picture, marked it up, and sent it back to Building Services: 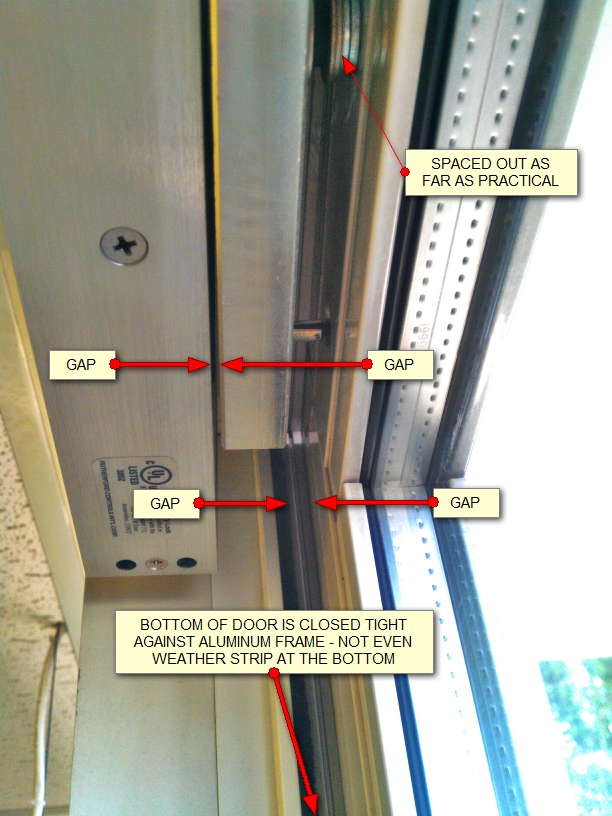 Actually, that's something worth covering: the fact that despite their simplicity, maglocks do have pretty close operational tolerances - the plate has to make full contact with the armature, and must cover all pole edges, or it won't "grab" and hold with full strength. Vertically, most probably can't be more than 1/8" out of alignment, and as we see here, even a small gap between them will prevent latching.

The title of that post will be: "Magnets. How do they work?" (Some of you will get this.)

It's a miracle ;). Also, I continue to learn a great deal through your posts and articles. Thank you!

Thanks for the response. Matt you mentioned and photographed just one of many scenarios of the horror of access control integrators. Once you install access on any door, you OWN it. It doesn't matter to the customer if an employee jambed the strike with cardboard. It doesn't matter if the once working maglock door is so warped from an attack that it wont even shut, you as the Door guru, must wave your magic screwdriver and fix it. As you have done, I have taken 27 8×10 color glossy pictures with circles and arrows and a paragraph on the back of each one explaining what each one was to show what was done and why I would have to either hire a sub or add hours to the job for me to fix it. You can get anything you want...

How about a piece of the article explaining the residual effects of magnetism on the arbor plate? Most maglocks develop this hang on effect after a few years and the only thing that cures it is a new arbor plate and or new maglock. The rubber bushings help for a while until flattened.

You could run a comparison on the install instructions and procedures for maglocks and test the install by force.

Actually, in this case, as a subcontractor, the door itself is not my scope - I have neither the tools nor the expertise to properly repair it (although I do have construction experience and have hung a few doors in my time). I also don't have the sources to replace it at an acceptable cost. And in fact, if I did replace it myself, we probably wouldn't be able to get paid for that, as it was "someone else's job".

To be clear: this is a retail outlet for a major national oil company, where there's a different trade for just about everything... in this case specifically, maintenance of the cameras, intercoms, and access controls, comes to us via the building maintenance contractor, from the corporate Central Maintenance department, and we're paid by the building contractor.

The DOOR ITSELF, though, is the purview of the site operator; THEY are required to call a door company and pay for that repair themselves. Might be part of the reason they keep calling it in as a faulty maglock, actually: if they can get me to hack the lock enough to keep it working, they won't have to shell out to get the door fixed. *facepalm* Naturally, the lock being a "critical safety feature", they are REQUIRED by corporate to have it working properly... hence the picture to the building contractor demonstrating the source of the problem and that I've done as much as could be reasonably expected.

As far as residual magnetism, I don't think I've ever come across this... more often, I've seen locks simply weaken, or have their effectiveness reduced by crud building up on the armature poles and/or plate.

Our go to Mag Lock is the Securitron M62 (1200lbs). We use the M32 every so often depending on the door. Very reliable mag locks.

My bad. I should have said, As far as the customer is concerned, when you added the access control, you OWN it.

That and the fact we have to really educate the customers to investigate a little first, not just call and say the door is broken, come fix it.