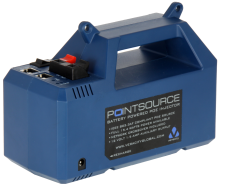 Battery PoE and data. Comes with a strap I can put around my neck to carry anywhere. Way easier than carting a PoE switch and an inverter around. I have to give props to Veracity because I don't know any other companies making something like this. That said, I have done zero research to see if there are any others.

I would love to hear what other tools people are using so please share.

I'll try to fill in more later, but here is one I'd recommend:RAM suction-cup mounts. This one has a 1/4-20 thread and will hold up most basic box cameras.

I use a 3-cup version with a modified mount to hold up our cameras for demos. I've had a camera mounted on one of these stay up in excess of 1 year on a glass surface. They are great for camera demos, especially if you want to leave a camera up in a location for 24 hours to test/show night time performance or other things. Quick, easy, removable way to setup a test shot.

By the way, I do not know of anyone doing something like the PointSource. Very handing for our testing. My wish is a PointSource that supports 2 cameras to side by side real time comparison!

I've used the PointSource without charging for many hours over multiple days. That has never been an issue. Biggest pain has been misplacing the power supply and then finding it.

One thing Pointsource needs is a PoE+ option.

Ethan, can you check with Veracity and see if they have any updates or future 'PointSource 2.0' versions on the way?

I ordered one of those Ram Mounts so we can try them out. We'll do a video when we get them with some thoughts, etc.

Update from Veracity : Yes, we have plans to produce further models of POINTSOURCE, but no, I can't tell you when they might be available.

Luis : We agree that a POE+ option would be useful.

The RAM mounts look really useful, so thanks for that and for the POINTSOURCE suggestions.

RAM also has a variety of different mounts and options besides the suction cup. I have used them to mount a camera to my motorcycle handlebars. They also make equipment for mounting tablets, GPS's and labtops in vehicles.

A small cost-effective PoE network switch that if it lost or beat up won't hurt the wallet too bad. I use a small Netgear 8-port switch with 4-ports PoE, they also make a 16/8 version for larger demos.

Alastair, yes we could use 2 of them. The size of those units are not a significant problem but I would assume this means we need a switch then (2 units going to 1 laptop). What switch do we use? Does that need to be powered too? That was the part I am not sure about getting around without adding even more complexity and bulk.

Actually I was being somewhat facetious when I said you could use two, but of course it does work. I take your point about needing a POE switch if you need to run the cameras side by side at exactly the same time, which I guess is how you run your trials to be completely fair to each IP camera manufacturer.

So, at the risk of being criticised for plugging more of our kit . . . . . . we do have a POE-powered switch. Many people will be aware of our OUTREACH Quad POE-powered switch device, but this has just been superceded by a more versatile device called CAMSWITCH 4 Plus. It has a POE input and 4 POE outputs and is pretty small (110mm x 70mm x 22mm). With our PSU, it has a POE output budget of nearly 80 watts across the four ports.

Using a POINTSOURCE to power the CAMSWITCH, you could just about power a couple of Class 2 cameras - enough for a reasonable test. However, higher-class cameras will not work - at least until we have a higher-power POINTSOURCE (which almost certainly means bigger and heavier, which is a disadvantage of course).

Alastair, thanks, we'll buy a camswitch and try it out with the pointsource.

Btw, I do not have any objections to manufacturers recommending their own product as long as it directly relates to the question / application being discussed and the manufacturer explains how it would solve the problem (as you did).

Also, thank you for clarifying the policy about manufacturers. That's great, as we have solutions for lots of problems ! (Seriously though, we are happy to adhere strictly to your very reasonable policy).

So, widening the discussion, does anyone have any requests for IP installation tools or aids that they would like to have, but can't find ?

The big one continues to be the camera install tool / hand held monitor (like the Axis T8414 / Dynacolor OEM unit). As our integrator survey results show, this is a real pain point.

I know a number of Axis dealers who use the T84s but at their price (~$600) and their limited support (No ONVIF last I checked), it's of limited use.

I must have missed that survey - thanks for pointing it out. Very interesting reading.

I would be very interested to know whether installers would be happier using a wirelessly-connected device as the camera setup tool instead of a laptop or netbook (i.e. such as an iPad, iPad mini, iPhone or any of the Android equivalent tablets and smartphones which can run a browser). Would this make it any easier for installers ? I suspect the screen size is an issue which might rule out all but the biggest-screen smart phones, but of course everything is a compromise.

Of course an iPad or iPad mini or other tablet can be nearly as expensive as the Axis device, but at least it would be universal and can be used for other things as well. I think Surface tablets can be had for less than $349 now . . . and most people carry some sort of smart phone anyway.

Readers may be familiar with our PINPOINT device which passes POE through to the camera and diverts the network connection to an RJ45 socket so a laptop can be plugged in. Indeed many of the contributors to the integrator survey may be using this device. What's new is that we are very close to launching our PINPOINT Wireless version of this product. It is also POE-powered via a pass-through cable to the IP camera but has a WiFi connection instead of the RJ45 socket.

Will this help installers ?