Recently, Carl noted that the lens angle specified in Axis M30 series cameras differed from what he calculated using a lens calculator. We verified this with a second calculator.

Here's what's in the spec:

On 3 of the lenses, the angle listed on the spec was notably wider than what the lens calculator reported.

"We measure the actual FOV for the cameras before stating the angles in the datasheet. As you know the FOV depends on the focal length of the lens, the sensor size, resolution, etc. Additionally any barrel distortion of the lens and can also come into play. We are working on a white paper explaining barrel distortion as it relates to wide angle lenses and other potential artifacts."

We also asked about the M10 series where two cameras had the same imager size and lens focal length but different lens angle. They responded:

"It's dependent upon how we use ‘scan’ the sensor. We don’t necessarily use all of the sensor with all products."

Let me know if anyone has any feedback or thoughts. I'll update this with Axis's white paper when it is released.

OK, I'll buy the "not using all of the imager's total size" argument but that would likely produce even narrower FOVs than lens calculators come up with, not more (unless they have a way to get more pixels past the edge of the sensor :>(

Another thing: what effect does a sensor's resolution have on FOV angles? More gobbledegook?

The resolution has no effect on the FoV angle whatsoever, but the imager circle versus the optic circle absolutely does.

But Carl, as you pointed out, all this can do is serve to make the angle more telephoto, it'll never be wider than the predicted spec.

At the end of the day, while calculating FoV is much more of sure thing than something like low-light capability, most good SI's or A&E's should leave some fudge room to ensure you're not completely dependent on the EXACT FoV angle spec listed by the manufacturer, because like driving a car, your mileage may vary.

You're right. I believe most lens calculators still allow ~10% for overscan based on CRT monitors, despite modern systems having much less (or even "0"). I also assume a 16:9 sensor would have a wider FOV than the same size 4:3 sensor, since it is my understanding imagers are still measured diagonally.

Yes but it's not much of a difference.

I know that doesn't seem intuitive, so I'll explain.

Seems to me backfocus distance would at least partially account for these variations. If backfocus changes, you generally have to adjust the focus to compensate, which depending on which way you have to adjust it, will change the *actual* focal length, vs. the "spec" focal length. A shady marketer could play with those settings to provide a "more than optimal" measurement with the same-spec lens - ie. if you take a lens designated as 2.8mm and play with the backfocus, you could end up with a wider FOV than the calculator tells you should be correct for 2.8mm.

Kinda reminds me of the old power-rating game in car audio amps, where some manufacturers using unregulated power supplies in their amps would measure output with a 14.5-15V power source, thus achieving higher "output power" ratings (actual output, of course, would drop off substantially when running off the battery at only 12V), while many of the high-end manufacturers would use regulated supplies and thus get lower test numbers, but then have an amp that would perform equally regardless of supply voltage from the vehicle (since your typical car's electrical system can vary anywhere from 11 to 15 volts). Granted, it's been 20 years since I've dabbled in the field, but I doubt things have gotten any better.

Anyway... it's not unusual in ANY technology field for marketing types to... shall we say, "be creative" with such specs.

The difference of angles in specifications and obtained by calculation caused by lens distortion. Moreover, the FOV of wide angle lenses in not rectangular and pixel density distribution is not flat. See details: About lens distortion 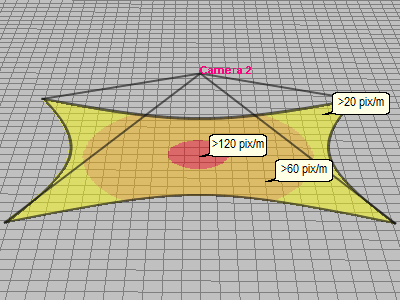 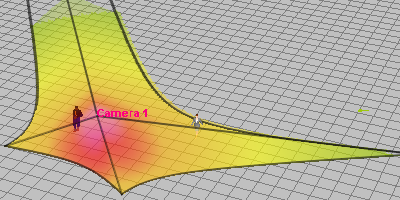