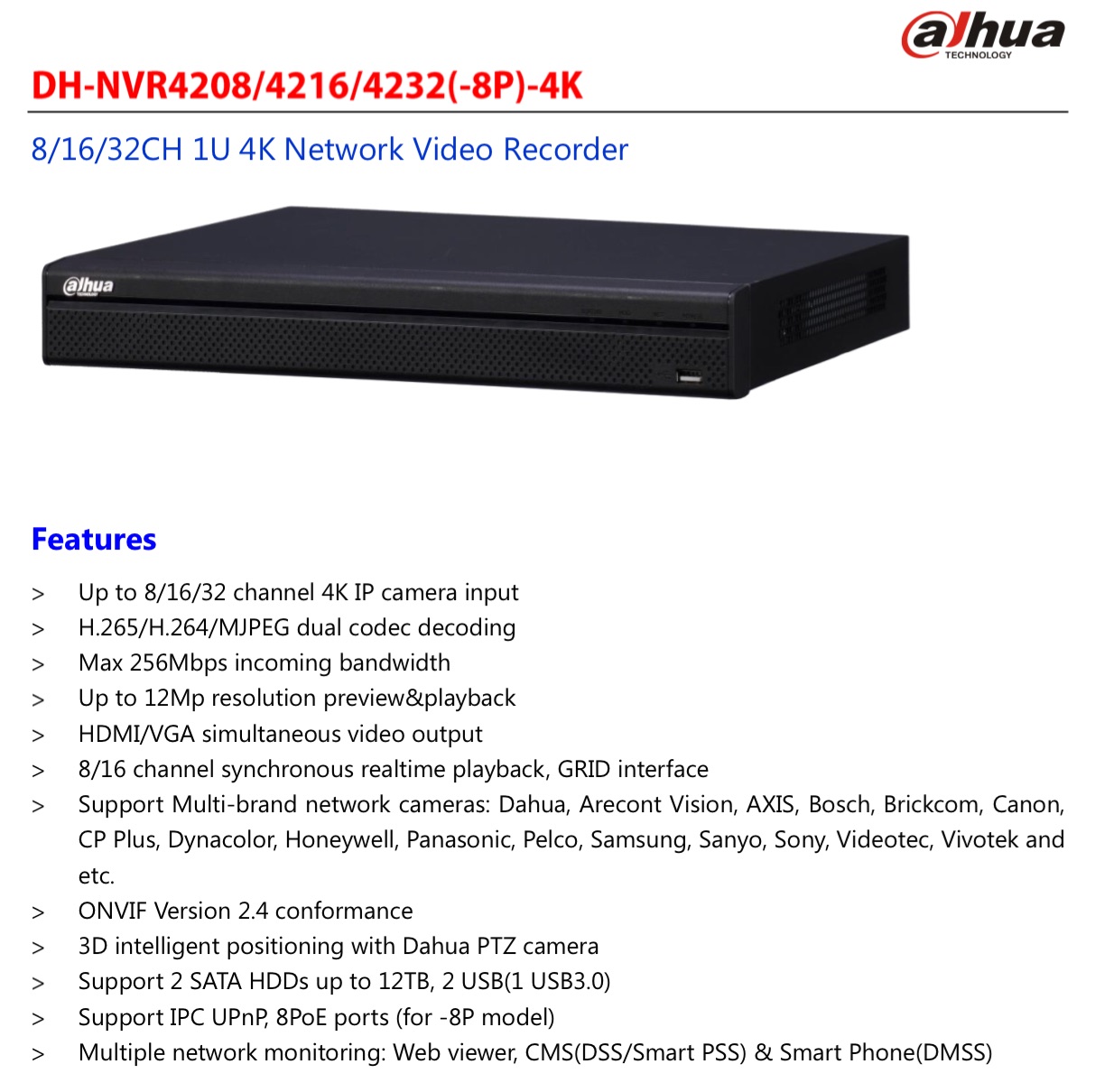 Given devices of this grade have been stuck at 2MP/1080p for years (maybe 3MP in a few cases), the leap to supporting higher resolutions is long overdue (4k being equivalent to about 8MP). Would be interesting to see if the "multi-brand" support is actually specific support for those cameras, or just ONVIF (I'm betting on the latter).

4k being equivalent to about 8MP.

Interesting also that even though they have lagged behind in resolution, they now take the lead in H.265 CODEC support.

Doesn't 1080p equal 2MP? I don't think publishing resolution specs that are equivalent for both the consumer and CCTV fields is a problem. Basically, everyone knows 1080p is 2MP and at least everyone in the field should know that 4k is 8MP.

In fact in at least some cases, I would prefer both terms. For instance, how would you describe some of the oddball aspect ratio cameras? What is 1280x960? Yes, it is 1.2MP but could you say for certain what its aspect ratio is given the pixel count?

And there is the fact that not all 2MP 16:9 cameras will do a full 30fps at that resolution. They're rare now, but they did and do exist... but I bet you'll still see those marketed as 1080p, because, well, people relate that to their spiffy HDTV at home.

I don't think thats true. There are standards for 24 and 25 FPS as well for ATSC standards. But, IP video for surveillance isn't ATSC anyways, so I don't think it applies. The only real minimums are 1080 lines of vertical resolution and progressive scan.

I would argue that ATSC "does apply" to the frame rate even in security, for the simple reason that if security is going to steal the term, they need to conform to the usage.

Are you saying that when you see 1080p you are not assuming a minimum of 1920 horizontal resolution? It's consumer shorthand. It would be idiotic otherwise just to specify the vertical resolution. In the same way if I see a camera listed only as 1080p, and then it actually performs at 1080p 5fps, I think it's misleading.

I'd rather see specifically "2MP 16:9" or "2MP 4:3" for 1600x1200, since as you note, there ARE those different designs out there... using 1080p and 4k to me just screams "marketing department" insisting on using recognizable consumer buzzwords.

...do you know of any IP cameras that use interlaced sensors?

First (and even later) gen IP cameras were mostly interlaced, espcially before H.264 came out to lower the bandwidth demands. Interlacing allowed you to use "half" of the bandwidth - because you only sent half of the picture...

Not sure I understand fully. Isn't, with NTSC for example, 30 frames a second actually 60 fields a second? 60 half pictures sent over the same time as 30 full ones would still have the same bitrate, no?

Not saying you are wrong, since I believe I read something on Axis website that was similar, I just didn't understand it.

NTSC only applies to analog transmissions. I'm unaware of any Axis analog cameras. They may have analog outputs, but those would be limited to SD NTSC output. None of which applies to 1080p.

Yes, NTSC only applies to analog transmissions and, yes there are no Axis analog cameras, (so sayeth the camera finder).

But I was actually asking about an IP camera's interlaced vs. non-interlaced sensors bandwidth requirements. I used NTSC, (since it is a well known interlaced format), as an example only to suggest that 30 frames/sec has the same information rate as 60 fields/sec.

To apply it to 1080p would be to suggest that 1080p30 is generally equal in bitrate to 1080i60. Note that with the 1080i designation, the number after the 'i' refers to the number of fields, i.e., half frames composed of either the odd or even horizontal lines. I may be wrong about the bitrate part tho, do you have an opinion on it?

On the other hand, if you were politely suggesting that the topic had digressed, I admit fault, and would then like to refocus by asking you as an experienced Dahua installer the following question:

Is there any chance in hell that this ($700?) NVR could record 32 4K streams while decoding the playback of 4 h.265 channels at the same time, without choking hard?

I will believe it when I see it. Let's put it that way.

I also agree that 1080p is just marketing terms that is driven by the consumer mentality from home TVs. In IP, it isn't telling you enough info, such as frame rate, etc. What about when WDR or defog etc. is turned on. or it may have a 1080 sensor, but what is the usable pixels. I know many 1st gen megapixel cameras that were 2 megapixel or higher, but low frame rate, different aspec ratios, interlaces, etc...

With professional products, the technical specs are king, and it is our jobs to be able to read them and what they are saying.

Spec sheets will often say "up to xyz". We need to know when 1 thing will affect the other.

Axis touts HDTV on their cameras. That is a consumer "standard" or label. What is it doing on a professional IP security camera. I could see it on a professionall broadcast camera, since that is used to make consumer TV video....

The 720p/1080p versions have always been ONVIF based support for all camera brands. You cannot access the settings for the cameras via the NVR.

Reply Edit
Delete
Create Topic
Ban post
02/07/15 09:01pm
Actually Matt they have their own brand that registers as private with full control and other brands with most major settings through ONVIF.
Reply
Agree Disagree: 1 Informative Unhelpful Funny Fav

While they do register as Private, they don't have full control. You can set things like resolution, framerate, and bitrate, but you cannot control even half of the settings in the web interface.

Reply Edit
Delete
Create Topic
Ban post
02/07/15 09:37pm
Many of the Dahua settings are spread out. Date and time are in one place. Resolution and frame rate in another. Motion area and schedule in a third and things like remote zoom/focus, WDR, BLC, Invert, Flip, contrast, day/night control are accomplished in the "color setting" section of the live view screen. What have I missed?
Reply
Agree Disagree Informative Unhelpful Funny Fav

Biggest frustration of most offshore brands, for me - how scattered some of the settings are. With most Dahua stuff (cameras and recorders alike), motion recording needs to be configured in three completely different places.

That said, Dahua's interface is worlds above some others... last time I set up a HIK NVR, it was a gong show by comparison. It may partly be that I'm more familiar with the Dahua stuff, but still...

Their SmartPSS VMS fortunately makes things a bit more efficient, if not easier, configuring the bulk of camera and recorder settings all in one program.

Matt, is SmartPSS stable for you?

I've occasionally had problems with it not immediately pulling settings from, or updating settings on, a device, most notably cameras with older firmware. It can be slow getting the settings, and sometimes fail in updating them, but most times it works after a second try.

As far as the software itself, I haven't had any issues with it. It's FAR better than the old PSS 4.x, which I've seen bog down and even crash computers if it was left running with more than a couple cameras showing.

Just got mine. Forgot I ordered it. 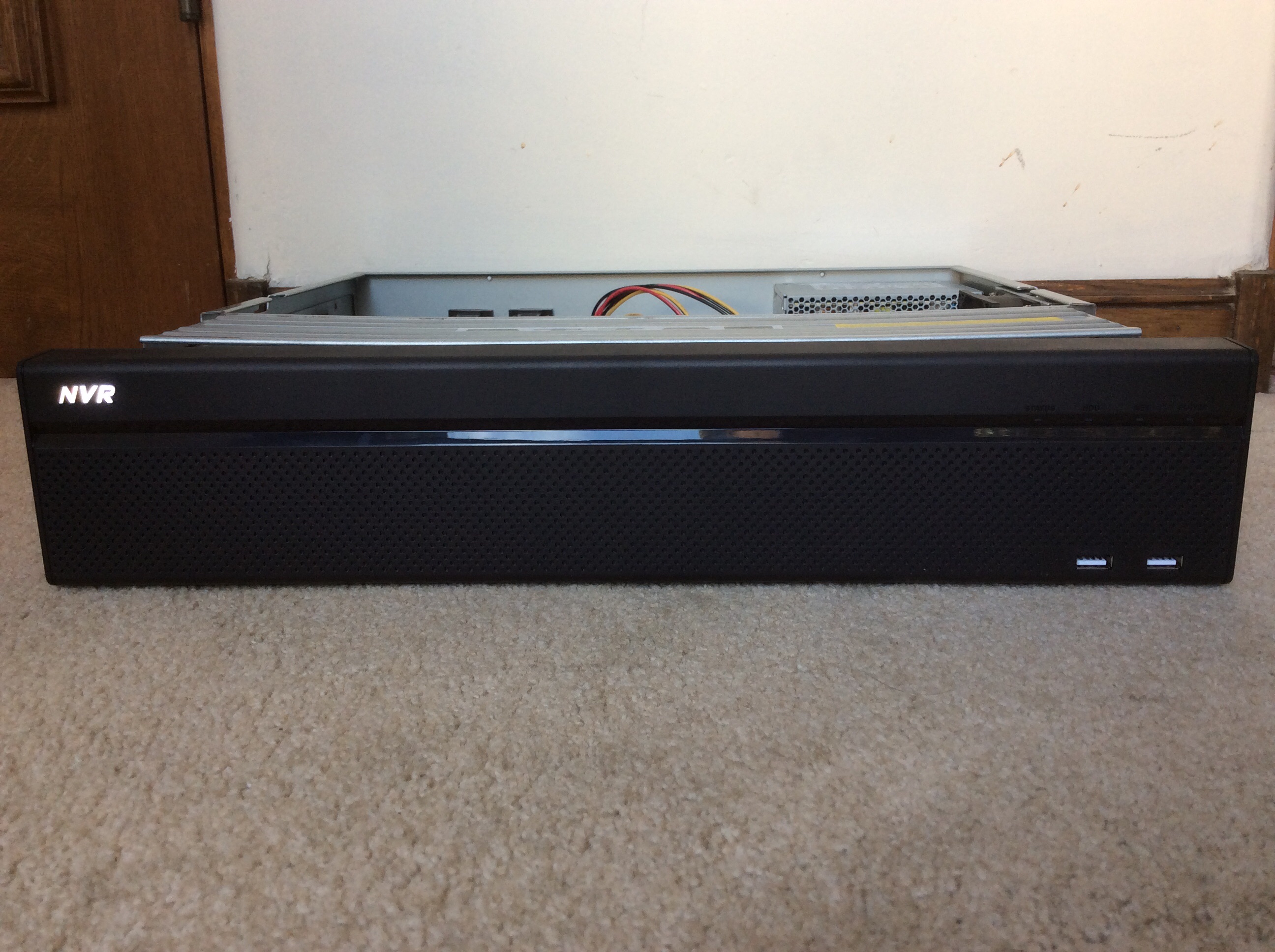 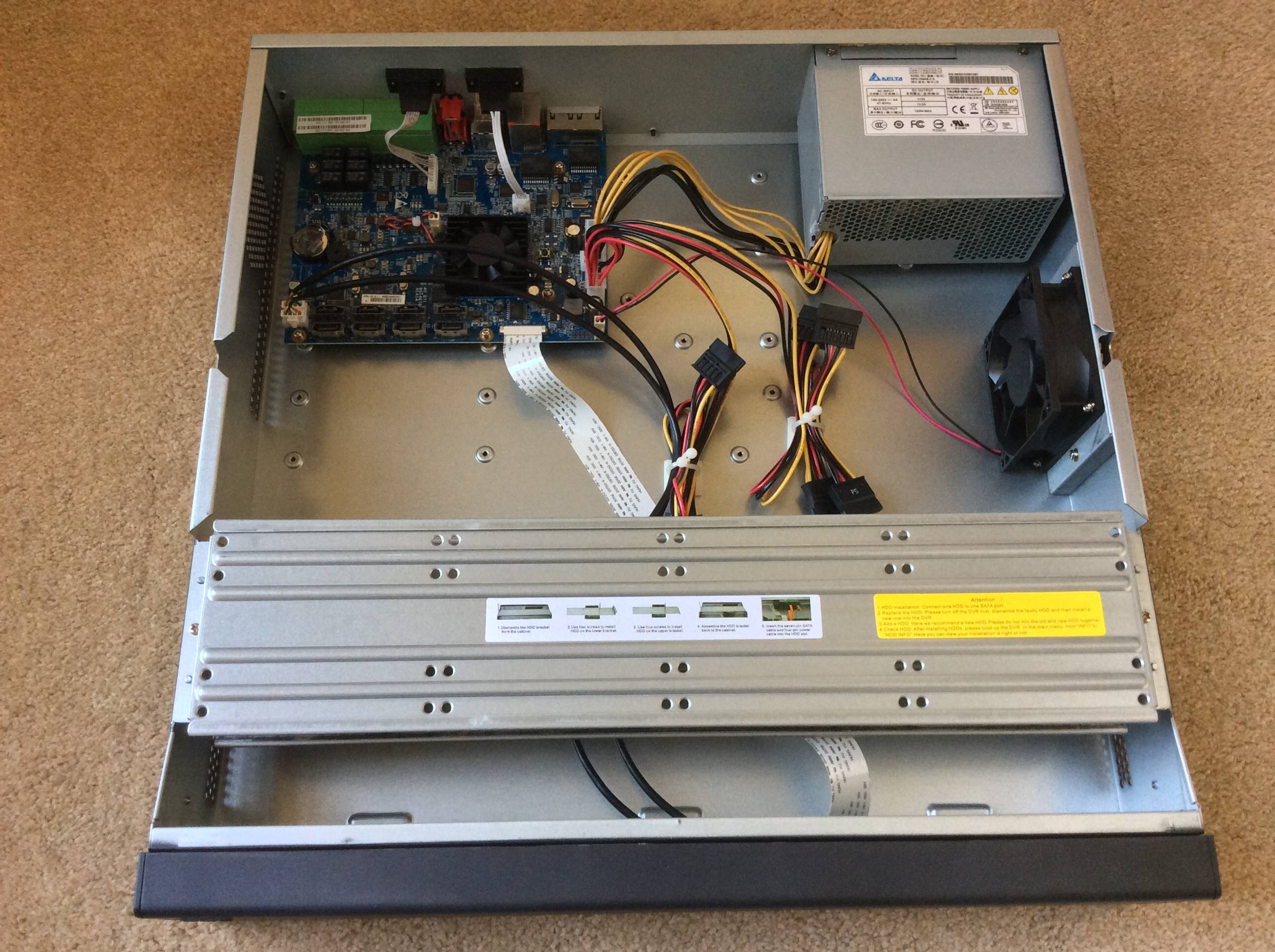 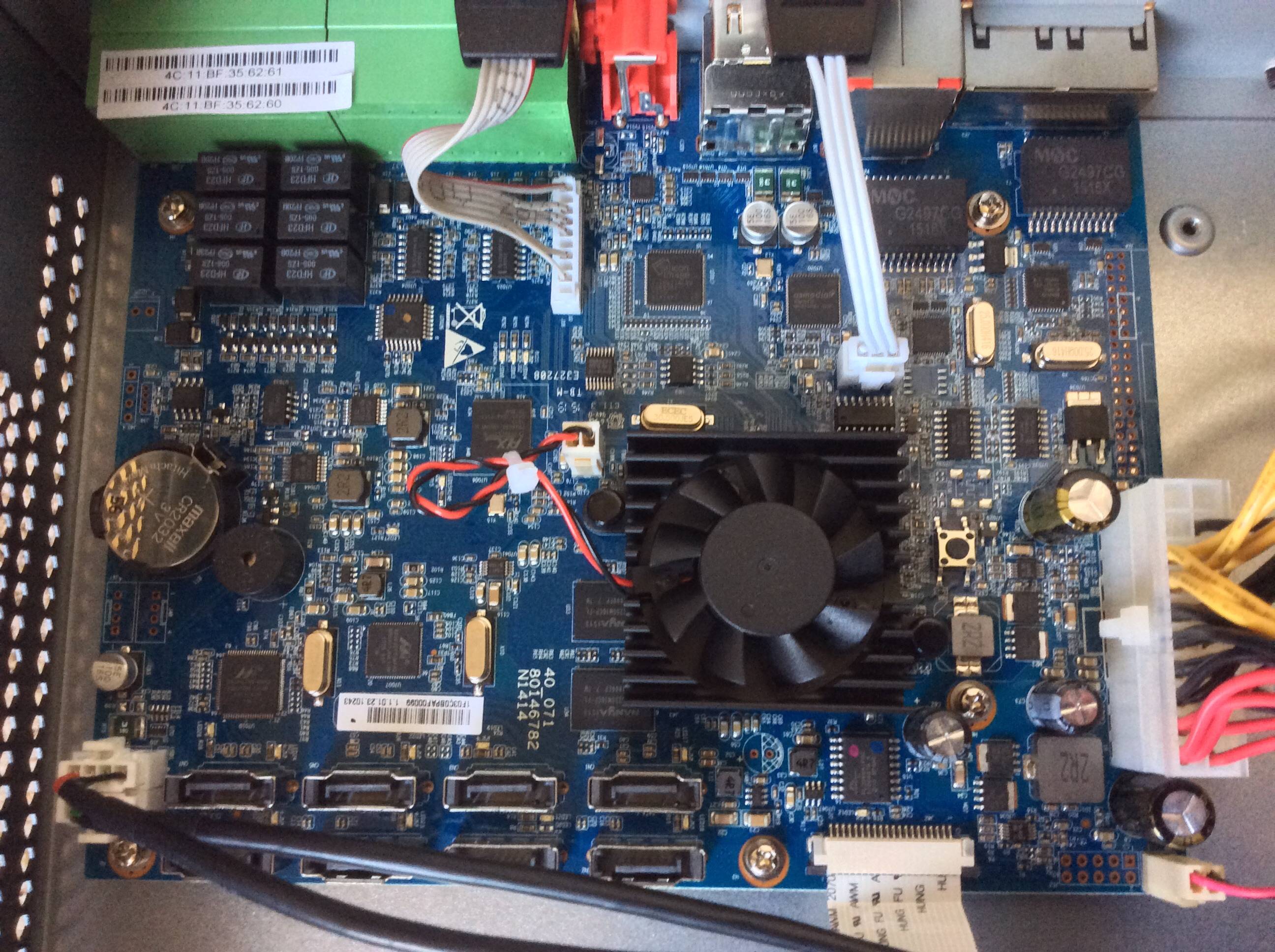