Is This A Dig At Ipvm/John?

If you look at the *note at the bottom, it says

Is this related to IPVM in any way? I don't get the intended message here?

Lol, maybe but probably not.

Spam is the meat of choice in Hawaii and Network Optix's founder lived in Hawaii previously, so I think that's the link, i.e., in Hawaii, you would send spam, because Hawaiians like spam.

If it is a dig, it is a clever/subtle double-entendre, since SPAM is actually wildly popular in Hawaii! 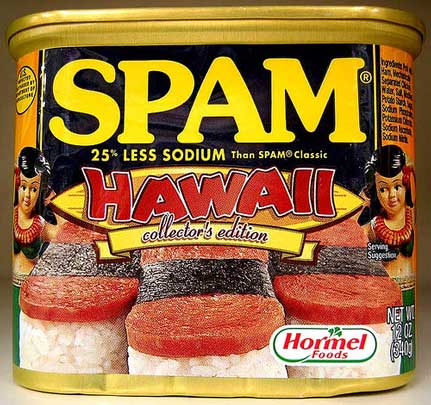 As evidenced by the above picture of what best can be described as "spushi".

On the other hand, Hawaii originated e-mail spam is not so popular, mainly due to bandwidth limitations, but also due the avoidance shady characters show for islands and other places with restricted egress.

The can says "Collector's Edition"....what the heck?

"Spushi"?... In The Islands that would border on heresy. That there nave is called Spam Musubi (moo-sue-bee) and it is available hot and fresh 24/7 from essentially every single 7-11 in the state, right next to the wrinkled hotdogs and Char Sui steamed pork buns. (and pretty much every other round the clock convenience store as well)