Looking for a IP Mini Dome with embedded SIM Card slot for 3/4G. Any suggestions?

You might be able to find something. From a manufacturer perspective, these are a tough item because unlike wifi, there is no single 3G/4G frequency/carrier. So, you end with a minimum of 2 or 3 SKU's for each camera model. Or, you have to use a chipset that supports multiple carriers, which adds a lot to the cost, relatively speaking. Then you often need to get the unit certified with big carriers to ensure it will operate properly, or else their system won't even allow it to be provisioned on the network.

There are trail cams that have this built in, but I'm not aware of CCTV cams off the top of my head. They might exist, perhaps start with an Alibaba search (if there is not a generic knock-off of it there, it probably doesn't exist :) )

A, take a look at Brickcom. They list a number of cameras supporting 4G via a USB port (e.g. this one). I don't know how it works though and what domes they have.

Mainstream IP camera manufacturers almost never support this, so while it might exist, it's going to be rare / niche. Does that minidome support 4G?

Yes, actually it does. The manual downloadable from the link I provided (under downloads) shows this helpful chart: (the C2 is at the bottom). 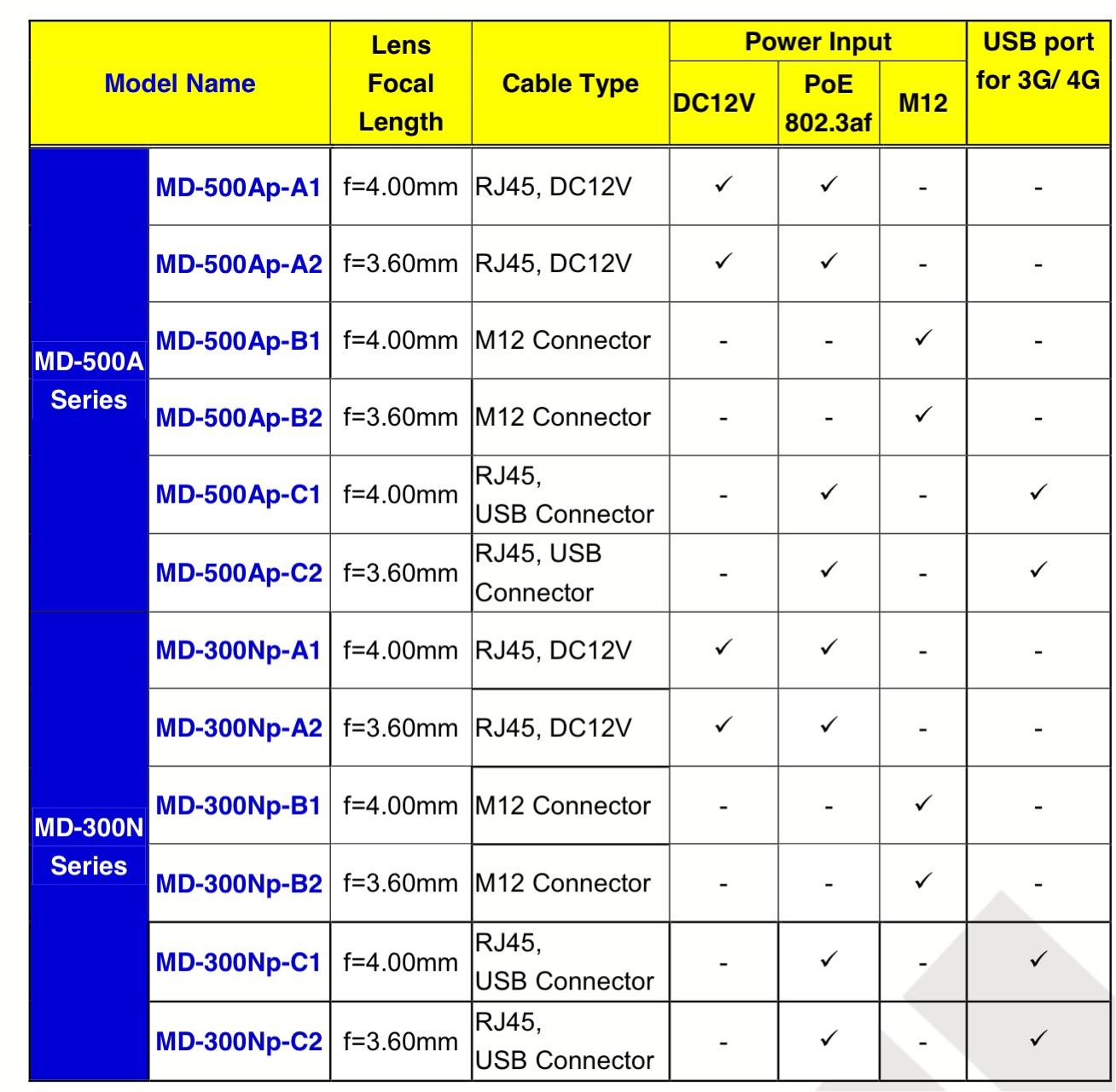 Technically, this doesn't satisfy the request of OP, which was "...embedded SIM Card slot for 3/4G..."

If you're OK with an external device, there are lots more options, like the camera referenced above. However, if you're going that route you might be better off with a camera that supports Wifi and then one of the 4G wifi hotspots from your carrier of choice.

Granted it's not frequent, but there are typically firmware updates for 4G router devices over time to keep up with incremental changes on the carrier side. I'd personally be a bit hesitant about a camera like this that also tries to handle the 4G connectivity side of things. Will the firmware get updated? Will it have other utilities common to this deployment style (DDNS, port-forwarding, etc.).

It's hard to say what the best option is because we don't have a lot to go on, but I'd be cautious about no-brand cameras attempting to target this use case. I've seen too many examples of things like this where the product meets a technical spec (has 4G support) but fails in the practical sense (no options to keep connection nailed up, no firewall flexibility, etc.).

Technically, this doesn't satisfy the request of OP, which was "...embedded SIM Card slot for 3/4G..."

Says who? Most likely the OP is looking to solve a 'problem', not write a legal document. Do you really think it would be better if John had not suggested Brickcom cameras since they only support a sim usb dongle? There is every reason to believe that these solutions could solve the OP's 'problem' and in the clear absence of any more conformant suggestions, entirely valid.

Moving on to the technical merits of your suggestion, i.e. the wifi to hotspot approach over the usb sim dongle. I see some clear disadvantages, such as:

As for the stated advantage, the firmware update/utilities etc., the dongle itself comes from the cell carrier and so is as managed from the 4G side the same as a hotspot.

This is also an advantage for the dongle since with a pure embedded approach, you don't have the option of using any carrier as the radio is built for a given technology.

Says who? Most likely the OP is looking to solve a 'problem', not write a legal document.

We don't really know *what* OP wants, as the question was rather light on details. But, that's why I said "technically", if you go just by the original question, the quest is for a camera with a built-in SIM card/slot (which, to me, *implies* built-in 4G functionality). So far no such options have been presented, but there are some good second-best alternatives.

There is every reason to believe that these solutions could solve the OP's 'problem' and in the clear absence of any more conformant suggestions, entirely valid.

If we are allowed to stray from the orginal request, there are several good alternatives, from Brickcom, and many others.

Needs significantly more power, since among other things, it needs to power two additional transceivers.

Possibly, yes. Though we don't know how it's being powered. If it's battery or solar, this could indeed be a concern. If it's powered from a wall-wart, it really wouldn't matter at all.

Needs more housing space (for hotspot. Also must insure wifi antennas are not too close.)

Maybe. Maybe not. You're going to need room for some kind of power supply, which would likely require a housing. From a pure cubic volume perspective, yes, this would take up more space, but housings aren't bought to exact size, they're generally standard sizes. It's unlikely that a wifi hotspot would take up significantly more room.

Really no more so than a USB-connected dongle. I'd trust a hotspot device from a company like Novatel in regards to vulnerability much more so than I'd trust the firmware of some unknown origin camera like the one being discussed. You can also find hotspots adapted for rugged environments, making it more likely to endure over time than a consumer-grade USB dongle.

Costs more for wifi in camera/hotspot

The hotspots are often free with a basic contract (granted, not for a more rugged one if you require that approach, but for one with the same overall integrity as the dongle). Most cameras that offer a wifi version charge a small amount more, it's not likely to alter the budget.

As for the stated advantage, the firmware update/utilities etc., the dongle itself comes from the cell carrier and so is as managed from the 4G side the same as a hotspot.

Not exactly. Yes, the dongle may get firmware updates OTA, but the device that sets up and manages the connection *also* may require updates or enhancements over time. In your scenario, that would be the camera. Same reason why you see incremental firmware for Cradlepoint routers, et al, at times. But you make a good point, with the hotspot, all these updates would be handled OTA (most likely) and the entire device would be kept more current than a dongle + external device combo.

This is also an advantage for the dongle since with a pure embedded approach, you don't have the option of using any carrier as the radio is built for a given technology.

This is what I mentioned in my first post as part of the reason why you're not likely to find a camera with a built-in 4G radio - there really isn't a cheap "universal" option, so it requires lots of SKUs to cover all carriers, especially if you are selling globally.

We don't know how/where this camera is being deployed. I could just as easily make up arguments for the hotspot approach (flexibility to position hotspot device in a location with a better 4G signal, easier to access the camers or pull data from SD card since you have onsite wifi, easier to add multiple cameras because you wouldn't need 4G bill for each device, greater flexibility in camera choice, etc.).

Related - Anyone have tried 3G bonding?