What does this mean? Who is this journal?

Insider Surveillance describes itself as:

"the leading source of information on surveillance technologies for law enforcement, government agencies, military intelligence, communications companies and technology leaders who together safeguard national security and protect the public from criminals and terrorists."

In a recent 3400+ word article on AI and Surveillance, they praise BRS Labs:

"The platform learns as it goes, memorizing a near-limitless range of human behaviors so it can quickly spot any aberration. The learning function is built-in, requiring no input, programming or modification by the user.

AISight is compatible with virtually any camera. After deployment, the system is plug and play so that users can install new cameras or move them without making any changes."

The site itself hides their identities, only saying it is a "work of a panel of experts on surveillance technology, lawful intercept, communications networks and intelligence. The nature of the business requires that our identities remain private."

However, the domain name is owned by CrawfordPR, a DC based tech PR firm.

[UPDATE: They have now hid the domain ownership, switching to a private registration.]

'Content marketing', where companies, or their agents, published their own news / reviews / opinions is certainly hot but a 'panel of experts' on a PR agency owned site is strange.

Ultimately, this does not tell us anything good or bad about BRS Labs yet it is quite an example of new PR tactics.

The big questions are:

2. Does getting coverage on the site require some sponsorship?

Many sites will at least have some buried fine print on this. The more upfront ones will actually put a disclaimer in the article itself.

I see no issue with PR folks posting/promoting links to content on their clients or partners - it's the nature of their job to do so.

It is when they express an *opinion* that the relationship should absolutely be clear.

I couldn't find a direct link between the two companies, based on a quick search. Would be nice if Crawford PR made a statement on this to IPVM.

I sent an email to Crawford PR yesterday. No response yet. I doubt they will but, if they do, I will update it with their response.

Update: InsiderSurveillance has now switched to a private registration, hiding their PR agency domain ownership. They also posted an attack against us, ignoring the registration evidence and speculating that we are connected to Russians because some wildly inaccurate online web stats tool claimed we had 30% Russian traffic. According to our directly measured stats, we had 120,000 visits last months, 1,239 of them from Russia.

Sad when a PR firm goes on the offensive, ignores the evidence against them and leverages a McCarthyism against us.

i am dying laughing right now... thank you ross!

...because some wildly inaccurate online web stats tool claimed we had 30% Russian traffic.

Maybe their data has stagnated, could it be from back in Alex K. hey day?

So what's the idea here? Companies buy membership, write their own articles, back-link to them in guest-blog posts? Although the unlimited posting is tempting, I have a serious problem with any site where the yearly subscription is offered at a negative discount to the 6-month. 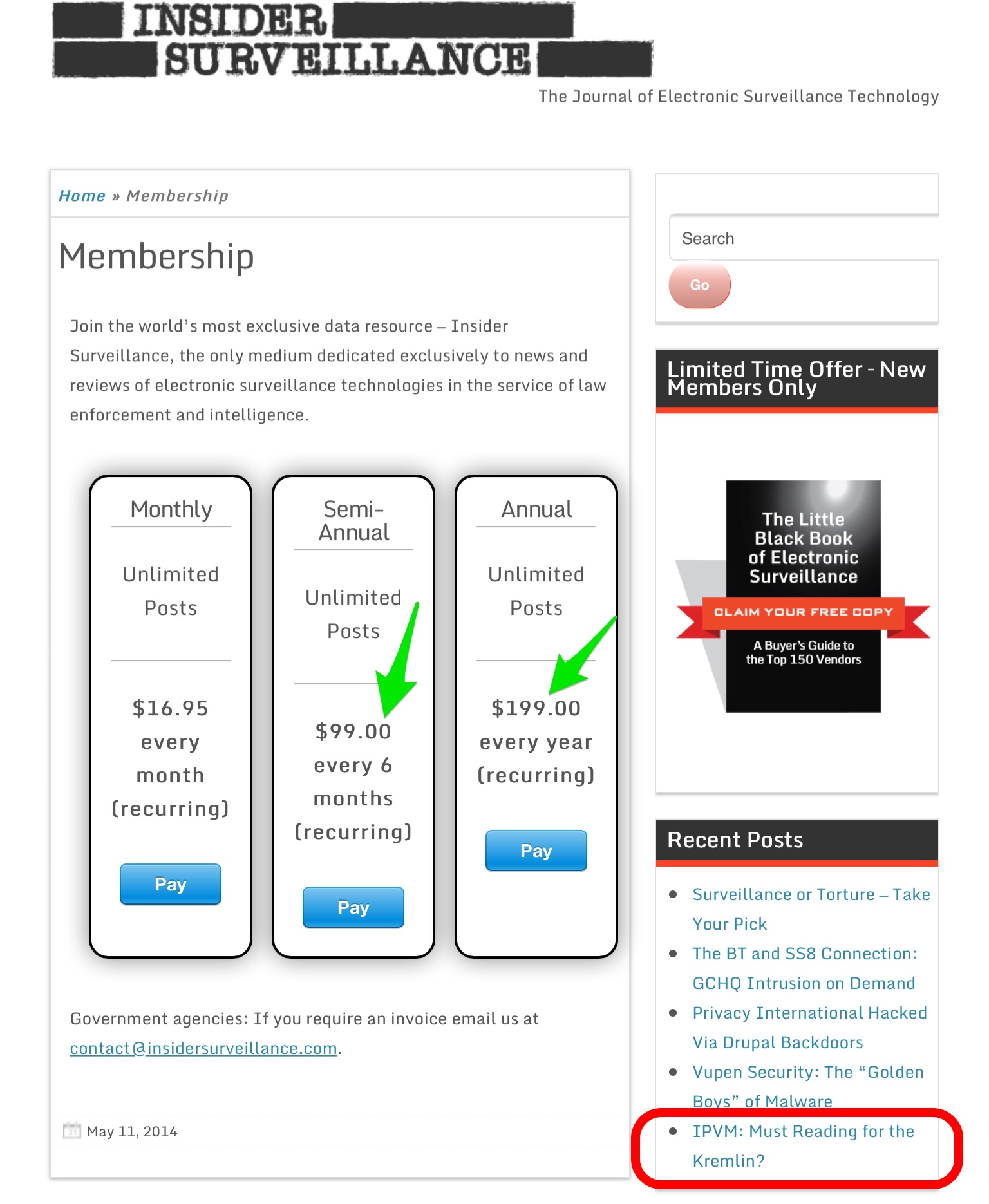 John, in case they are right though about the Kremlin, maybe you could write an article and tell Vlad to cut the crap in the Ukraine, pronto... or else you're canceling his membership. Now that's pressure!

Why CNET Leaves IPVM in the Mud on Video Surveillance

It calls out an IPVM article from 5 years ago and then randomly shifts to saying CNET is better than IPVM. How weird...

Sounds fishy to me, thanks for your expert inside advice!

After reading the article I thought the 'awards' that IPVM bestows on companies was after polls or voting had taken place by members of IPVM?

Is that not the case?

IPVM does not issue 'awards'. We do have the 'Favorite' and 'Worst' series but those are strictly based on integrator member votes. Also, unlike any other publications / sites / organizations, we have a strict no promotional use of our results.

Btw, this is the 'award' that the article is referring to: Verint Wins "Worst Surveillance Company 2011". It is obviously not a real 'award', it is a satirization of Verint paying for an award marketing campaign.

Btw, a member emailed me about this claim from that article. It's false on 2 levels, just as an fyi:

Infinova has experienced its ups and downs during this period and lumbered along at roughly the same market cap. But they’re sufficiently strong to have purchased Vicon, a US-based HD videocam maker with revenue of $US 70 million earlier this year. (emphasis added)

Just in case you read that and though there was some news there, it's just factually wrong.

I guess they shouldn't call you out with bad information.

After reading that entire article, I am left wondering why it was even written. It's a narrative attack on IPVM with ill-supported claims and conclusions.

According to the author, their reason for writing this piece was the 5 year old IPVM Verint post - however, the author clearly shows that this can't be the only reason... by the last line before the FINAL NOTE:

"Why take a lone website such as IPVM to task for sins committed five years past? Because they haven’t changed."

This statement indicates a continued, long-standing familiarity with IPVM, does it not?

But what I find the most bizarre is the very last thing the author posts:

"FINAL NOTE: Reviewing SIGINT/COMINT/ELINT solutions used for the monitoring and apprehension of criminals and terrorists is a dangerous business. Hence the need for maintaining anonymity and retaining outsiders as a public face. All differences aside, we wish to convey our sincerest appreciation to IPVM for their admirable record of cooperation in this matter."

WTF does this mean? What was the intention of the author in making this statement the way they did?

It begins as a serious statement, then segues into a supporting statement for the first line - then weirdly seems to be making an indirect threat against IPVM for previously revealing the PR firm in the WhoIs data from a few years ago in this string.

imo, the bold part can be read only as a threat. i.e. these are important people doing important things and they do not appreciate IPVM revealing 'ownership' by the PR firm of the domain in the original post.

Am I reading more into this than there is? How do you read that FINAL NOTE?

It calls out an IPVM article from 5 years ago and then randomly shifts to saying CNET is better than IPVM. How weird...

Kudos for realizing the article was 5 years old, unlike the following IPVM critique by the infamous MxReviewer:

This is just pure entertainment. My favorite part is the CNET thing. Apparently they are super serious security people who can't reveal their names because protecting people is a "dangerous business," and yet they prefer a consumer-focused review site that covers Nest and Foscam to a truly useful, all-encompassing industry resource. Woof.

They don't which makes the whole thing even dumber.

Wait I take that back! There is one mention of AXIS on there