This is from a SunTrust bank within a Kroger grocery store.... Has anyone ever seen cameras displayed so overtly in any public-interaction setting? 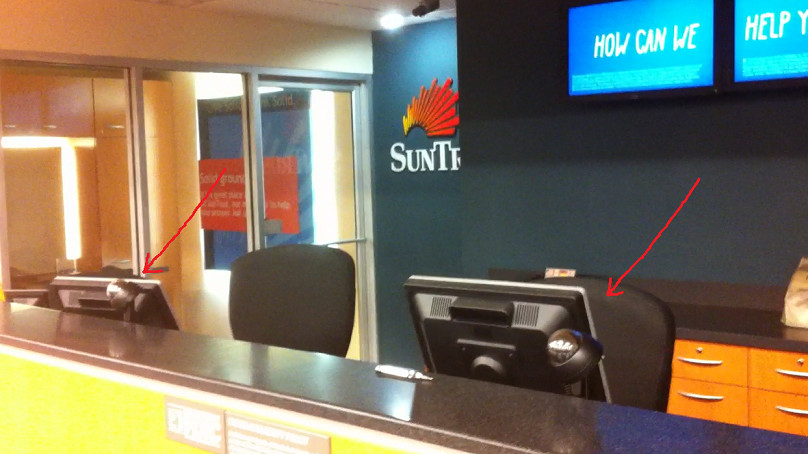 Here's an example of a tower camera, marketed by ADT, for the same purpose. 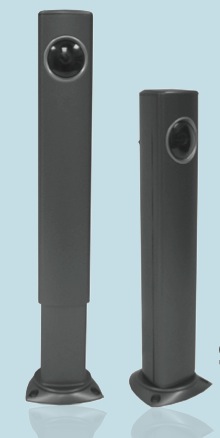 Btw, those SunTrust camera look like a mini-dome popped on a stick. If there was a close-up / heads on shot that might help make it clearer.

I think that is exactly what they did. I don't have any shots from behind/below, but here's some close-ups... 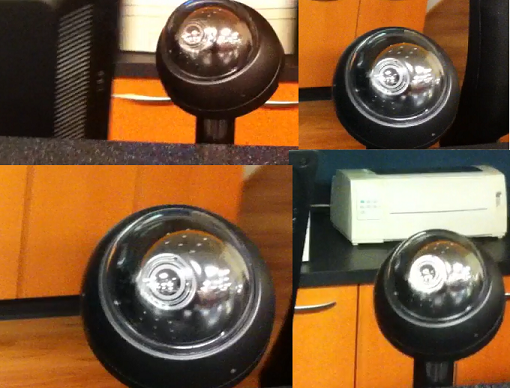 In reply to Marty Major | 07/28/13 09:33pm
Covert!? Ha! That is a pretty shotty set up. It's like bam you're on video! Axis has a hockey puck type mounted covert camera that is a lot less intrusive.
Reply

Wells Fargo bank branches in the Seattle area use the same set-up except the domes are sitting straight up rather than angled. 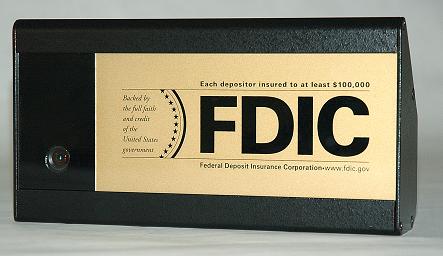 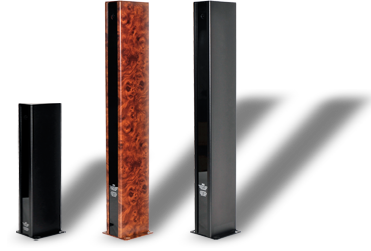 So why put a dome on a stick when purpose-fit form factors like those above already exist? Price?

When I first saw it passing by, I immediately thought "how customer-friendly!" (NOT)

With the SunTrust bank in question, the entire bank is within a well-lit, large chain grocery store.... there is already surveillance everywhere, both inside and outside the building.

So if a robber was going to hit that bank, it is almost assuredly not a takeover robbery. Odds are, almost all instances where someone has robbed one of their in-store branches, that the perp slinked in like a regular shopper - probably wearing a hat to obscure his face from the numerous overhead cams.

So, the only really effective bank camera angle to provide shots the stores cams can't, is to mount them right on the counter facing up and at an angle towards the face of anyone standing in line.

That said, the placement SunTrust used in this location seems more intended to disuade the average store-bank robber from hitting them in the 1st place, since the cameras are so obviously aiming at their face from only 2 ft away.

Cameras in banks are used far more often to deal with fraud than robberies.

If you take better images, you will sell more cameras. The robbery images get all the attention at the banks, but it is the fraud problem that gets the funding. Real bank robbery images on line. 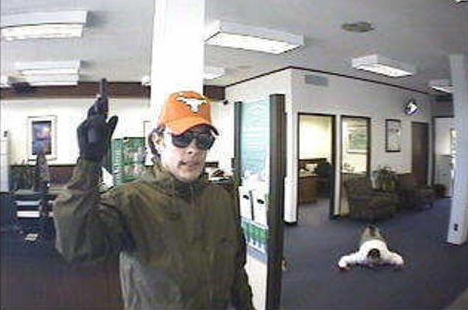 Note, that is from a tower camera, a good example the difference angle makes from conventional, ceiling mounted cameras.

The FBI said his mom turned him in for the reward money. Note: The guy in the background is having a real bad day.

We used something similar to this for a university to capture pictures for student ID's in the bursar's office, but they were Logitech webcams.

Those are meant to be overt and cooperative right? What banks typically want is discrete, non cooperative camera setups.

They have these at self checkout at many of the home improvement stores in DC. This one is at a Home Depot. 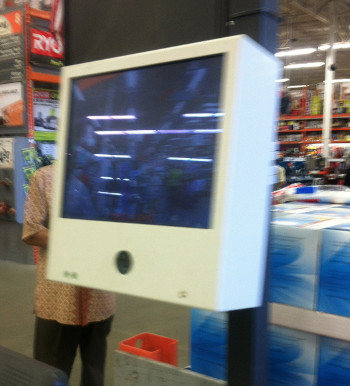 I work for a bank, and I have seen this type of installation before. Cameras mounted directly on, at or near the teller line. Not simply on the wall behind or ceiling above.

We don't do any of this. We have brand and we want our facilities to all have the same clean lines look. So placing a camera on the teller line counter is not going to happen. As far as Charles Dozier's comments about the robbery photo gets all the attention but fraud gets the budget, this is true but there are reasons for this. Today bank robberies are few in comparison to fraud events. Banks get hit with fraud every day. However,your bank branch may not get hit with a robbery but once or twice over a period of years. This explains the budget. However,the reason the robbery image gets the attention is no fraudster has ever walked into a bank waiving a gun and yelling this is a forged check. Every fraud event is non-violent. Many robberies are non-violent as well however a majority of them state, claim, or passa note claiming to have a weapon.

Damon, if it was logistically feasible to mount the cameras lower without ruining aesthetics, how much, if any, would it improve the surveillance shots of suspects?

I have been doing this for almost 18 years now. What I have heard for 18 years now is better images from banks is needed to ensure capture of the bad guys (Fraud or robbery) does not matter. We have learned lower is better. If you place a camera high on a wall or in the ceiling, this is good for the 30,000 foot aerial view, but lousy for good identification. Lower on the wall or ceiling. At or below eye height.

Door mullion cameras are great for the face as they walk out. However, most are terrible from the stand point they look bad, and don't offer any physical pan or tint of the camera. Often the bad guys head straight to the exit from the teller line. However often the angle to the door from the teller line does not allow a straight on approach to the door allowing for a straight on field of view. The side profile is useless if this is the best image you have.

We have used the IRIS FDIC camera in a few select locations however here is an issue with these cameras. They are designed to be mounted right on the teller line. Now a customer bad guy or not placed a bag, purse or their fore arm on the counter the cameras field of view is now blocked.

Damon, thanks! Very helpful insights of the issues involved. It's clearly a hard problem to solve with all the logistic constraints.

Perhaps you can have all your tellers were Google Glass ;)