How Do Cameras Dissipate Heat In An IP66 Housing?

In an IP66 housing (dust tight and powerful water jet), physically there is no air ventilation in the outdoor housing. For fan/blower outside temperature is hot and inside temperature is also hot. How then is heat dissipation happening?

In practise it in not necessary to rely on cooling air passing through a camera housing, in fact most cameras do not have holes in the case to let cooling air through. The designer just has to make sure that the components generating heat pass it across to the camera casing either by conduction or by internal convection. If the electronics only dissipates 1 or 2 watts then special precautions are not normally necessary. If the dissipation is higher, then heat conduction paths consisting of thermally conductive foam, or metal components may be necessary to make sure that heat from the integrated circuits is conducted to the camera housing, which in turn cools by convection in the outside air.

It is possible to have an exhaust vent and still retain IP66 rating.

The rating describes protection of the internal components. As long as the enclosure keeps the bad stuff from reaching the 'protected chamber' (camera), then it can retain it's rating. Vent chambers that allow heat to escape, but do not allow humidity, water, and dust to directly enter the enclosure can be built using membranes or vent fans.

There are other examples where enclosures use a heat exchanger (ie: radiator) to dissapate internal heat with the outside, but that relies on a substantial differential with outside temps to be effective. (ie: May not work well in hot environments) See this IP66 rated example from Moog: 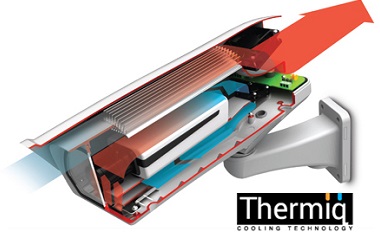 However, like you mention, I'd wager other (cheaper?) IP66 enclosures probably are nothing more that a sealed box. Using those in hot environments probably is a bad idea.