How Did Samsung Beat Objectvideo Only To Settle With John B. Adrain?!

ObjectVideo's patent litigation record is impressive and almost unblemished. Prevailing against all those who would not voluntarily submit, Sony, Bosch, Panasonic, et al.

All except for Techwin, who turned back OV with this Samsmug comment

"We are very happy that the staff attorney and now ObjectVideo has apparently realized what we have been saying all along, that our products do not infringe ObjectVideo’s patents," said a spokesman of Samsung Techwin’s Intellectual Property Department in the statement. "We respect the intellectual property of others, but we do not pay unnecessary license fees simply to avoid litigation. That is why we decided to litigate this case and this outcome vindicates our company principles,"

John B. Adrain, celebrated "Doomsday Prepper Sprayer", on the other hand has much activity, but little, AFAIK, success as a litigant.

All the more puzzling then is this settlement back in August between Adrain and Samsung for an unspecified figure. Maybe it was only for a token amount, but was it just coincidence that Adrain opened up three new attack vectors against well funded and skilled adversaries the next month (HIK, Dahua and Avigilon)?

All being sued for the same Patent#, US5831669, entitled ‘Facility monitoring system with image memory and correlation,’ originally issued on Nov 03, 1998. In Samsung's case the claim revolved around the facial recognition built-in to their Smart TV's. Compared to security products, a bonfide claim against a popular consumer electronics product could have been a sizable settlement.

Meanwhile, the Avigilon case has been extended into January. So how long might John B. A drain on the security industry, now? ;)

Samsung Electronics settled with Adrain for a patent on their Consumer TVs and facial recognition.

Now perhaps they are separate, but at the time they were controlled by the very same Samsung group, which almost certainly would have been consulted in such potentially expensive matters.

Also, you would expect them to defend an attack against a core consumer electronics division even more vociferously, so the fact that they didn't in this case is perplexing, to me at least.

Interesting is the fact that Adrain is using the same patent# infringement against Avigilon et. al, presumably not for TV's, indicating a rather broad application of this IP...

After the stock sale, Techwin is still part of the Samsung Group. All R&D, etc. is has been, and is still done from Techwin. Security monitors & other products are still Techwin, and have never been Electronic's products.

Nov-27-2014 An agreement has been signed which will see the controlling shareholders of Samsung Techwin, including Samsung Electronics, Samsung C&T and other Samsung Group affiliates, sell their holding stakes in Samsung Techwin to Hanwha Group.

Put whatever Techspin you want on it, the previous controlling shareholders of Samsung Techwin were the Samsung Group (including SG affiliate Samsung Electronics). Even leaving names out, the same entity was in control of both affiliates at the time of both lawsuits.

Do you contend that Hanwha will not control Samsung Techwin after the deal completes? Someone should tell the Techwin protesters... 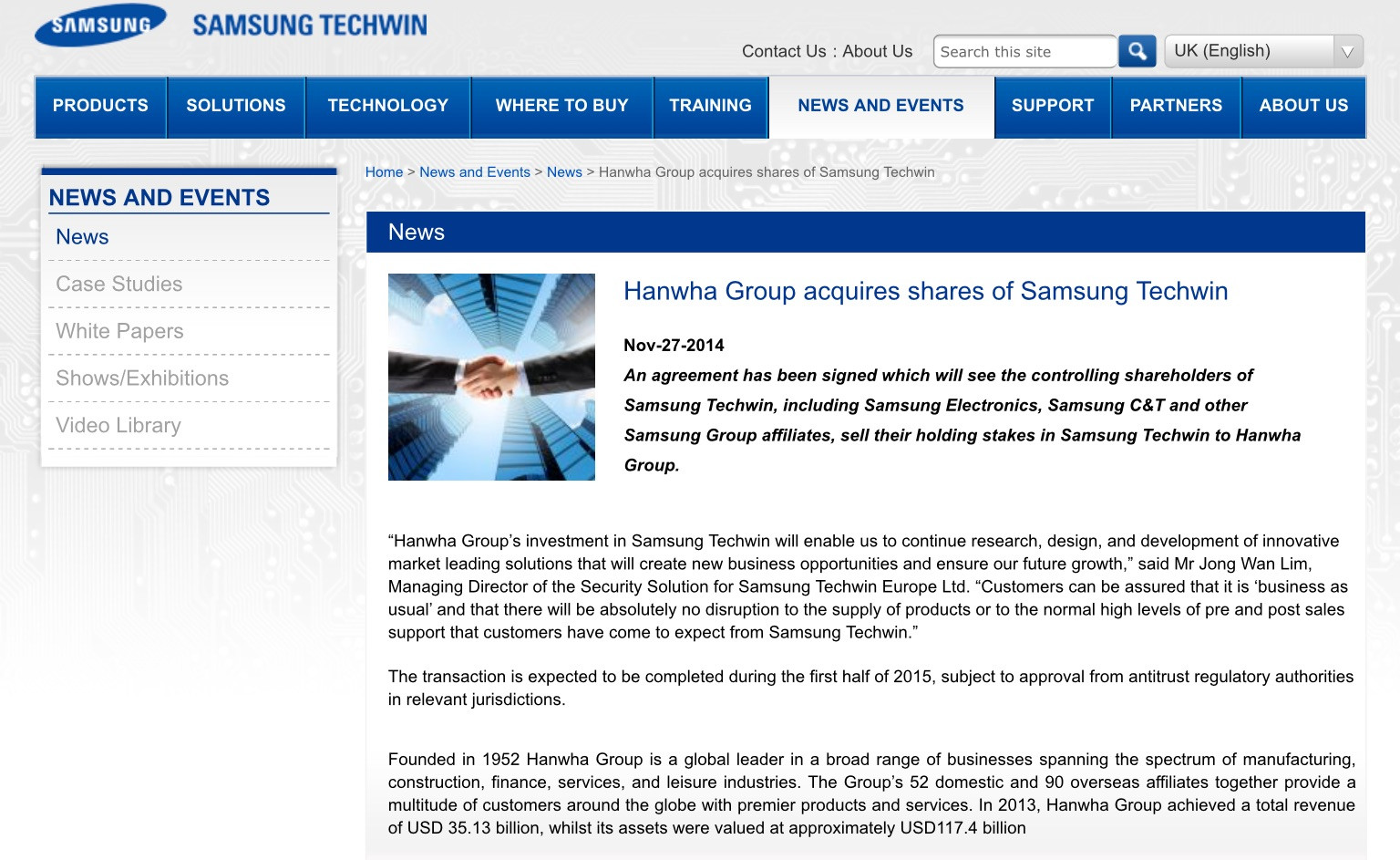