Does anyone know what ONVIF's plans are with regard to h.265?

The fact that searching for H.265 on the ONVIF site returns nothing leads me to believe one of the following is true:

If 2 or something close to it is true, it's unfortunately coming at the nadir of willful interoperability between VMS and camera vendors.

Does anyone know or perhaps the official ONVIF envoy would be moved to speak on this matter?

I would suggest that both are true.

ONVIF can easily 'support' H.265, but whether VMS companies are able to support that video encapsualtion is at 'best' speculation at this point.

It's likely to listed and advertised by a compliant camera as an optional video CODEC and if the VMS can support it, it will grab that stream. Whether any of them initially do or not...

Not an official envoy of ONVIF but an active contributing member nonetheless.

Like Ian mentioned it's already possible to extend ONVIF to support additional codec types (I personally know of a least one company implementing JPEG2000 through ONVIF.)

ONVIF is also working on making H.265 an official part of its specification as an extension is currently in-preparation for support of H.265 and open approach for future/custom codecs. I do not have the publication timeline for the extension but expect it sooner than later.

Also ONVIF just recently started discussion for a new Profile to cover H.265 and frequently requested missing features like Motion Detection. The work on the new Profile should start in the next ONVIF F2F Meeting happening in early June.

Thanks B. Yes, I see the support for optional CODECS. The question would be then if NVR Mfr. A and camera Mfr. B were both to independently 'extend' ONVIF to support H.265, would their products likely work together using H.265? Or would they both have to 'extend' in the same agreed on way?

I personally know of a least one company implementing JPEG2000 through ONVIF.

With the current spec they would both have to extend in the same agreed way so no instant interoperability. This is a problem that the new spec extension should resolve for future implementations.

For your second question, I'm sorry to say that I cannot disclose the company in question. All I can tell you is that those kind of codec extension through ONVIF are extremely rare.

The answer is probably yes, it would work.

The extension method is pretty easy and simple and most of this type of development isn't done in a vacuum anway, so it's highly likely that the two vendors would have discussed how to do this before hand.

I think there's only one company that is currently pushing JPEG2000. ;) In my home and native land even... Pretty easy to guess.

I think there's only one company that is currently pushing JPEG2000. ;) In my home and native land even...

I did not know that the J2K cameras were ONVIF. In fact I thought they were the epitome of closed and proprietary cameras

Though I see no claim of ONVIF JPEG2000 integeration...

In any event, not "pretty easy to guess", so Ian may be referreing rightly or wrongly, to another manufacturer, perhaps AXXXXXXX?

I'm happy to stand corrected re: the vendor.

Perhaps, the more relevant question is are there any VMS vendors other than my friends from the great white north that support JPEG2000 - ONVIF or not?

Genetec and Wavestore do. I'm unsure of others. Genetec supported it ages ago because of some old GE integrations which were wavelet. Wavestore added it because they were among the first to support Ampleye. IndigoVision also OEMs the Ampleye camera, so they must support it also unless they're only using the ONVIF 1080p stream, which would be odd.

Genetec supported it ages ago because of some old GE integrations which were wavelet.

How many ages ago?

Remember we are not talking about support for just JPEG2000, but for JPEG2000 thru ONVIF. As per the original claim (which was since retracted)

I personally know of a least one company implementing JPEG2000 through ONVIF.

Ian's question was who supported it, ONVIF or not. I answered.

Ah, I read it differently

B, thanks! Very helpful.

There would literally need to be a whole new profile just to add H.265?

It's not required but it allows specifying strict requirements on Devices and Clients which greatly increase your chances of successfully connecting them together. It also a good opportunity to address known issues with Profile S.

The idea is to avoid going back to the pre-Profile era where every connection attempt would be a gamble since you had no idea what was implemented on devices and clients.

As one of our valued contributing members mentions above, The Technical Committees are actively researching methods to add the newer technologies to the core specification. This includes H265 and a look at other market leading trends in technology.

Once added to the core specification a member can propose a new profile that includes this functionality.

Standards work tend to lag a little bit behind the technology curve, but in ONVIF's case it is encouraging that the members are already actively working to create a sepcification and standard that allows manufacturers on the leading edge of technology to continue to leverage the ease of interoperability conformance to an ONVIF profile brings.

In terms of timeline, it sounds like at a minimum the steps required are: (with some concurrency)

Even assuming some concurrency in the steps, it sounds like several months if not longer before we are at the point where one will be able to buy a ONVIF profile X camera and know it will work ith a ONVIF profile X NVR.

Not being held to anything, can you give a rough estimate of when that might be?

Does anyone have any update, or are we headed towards a new dark period of incompatibility?

H.265 does not save bandwidth.

I am exaggerating slightly but until H.265 offers more benefits, not sure if it is a real concern.

You don't work on the standard after 10 different vendors have their own implementation in the market.

Its already too late.

And how many YEARS was it before it worked with pretty much every camera?

When everybody has already created their own code set that works with their own product there is less incentive and less benefit rewriting to someone else's standard.

Its no coincidence that those who have been saying h.265 is not ready and years away are the ones that control ONVIF.

Btw, are you using Category 8 yet?

Category 7 committee was started in 1993!

"And how many YEARS was it before it worked with pretty much every camera? 3? 4?" 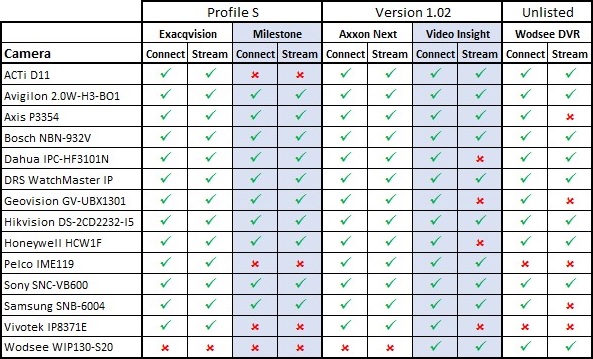 By default, both cameras stream only in MJPEG using ONVIF. In order to connect and stream H.264, users must use a custom URL, adding "#profile0" after the IP address (172.20.128.33#profile0, for example). Even using this URL, we had some intermittent issues with the camera switching to MJPEG after a reboot, but disabling and reenabling it remedied these problems.

Did I miss your Devil's Advocate disclosure? ;)

That's a very smart piece of insight that almost makes me worry about implementation; but fortunately, I'm replying to an old thread and there's already been efforts by the groups to standardize. Had I read your response a year ago however, my expectations would have been undermined by such a good point.

Had I read your response a year ago however, my expectations would have been undermined by such a good point.

Then you must *not* read the conspiratorial posts:

Can Axis Be Kicked Out Of ONVIF?

Was Creating ONVIF a Wise Decision For Axis?

Look for things to move along quicker with ONVIF now that Axis is making h.265 products.

"Let's see, its got the latest compression technology and ONVIF version. Check." 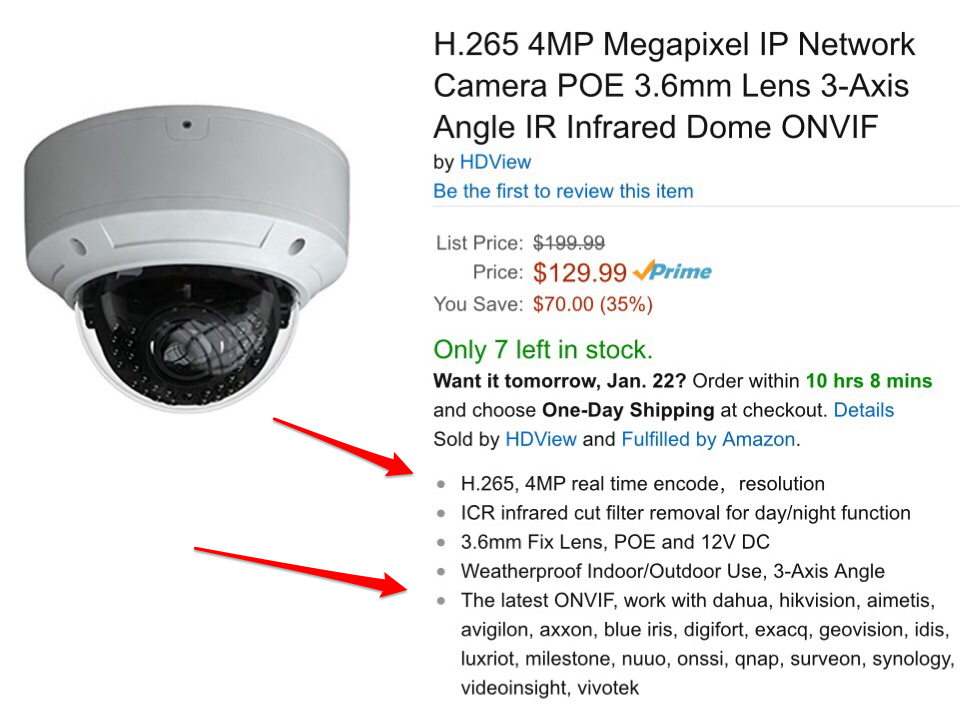 "Now let me find a good NVR to go with."

Disagree. This is a continuation of ONVIF's indifference to policing its brand / mark. It's not about H.265 specifically, it's that vendors can make any ONVIF claim they want without ONVIF doing anything.

But this one is OK, right?

Clarification: You're not saying there is anything wrong per se with claiming ONVIF and H.265, correct?

The opposite. I am saying since ONVIF lets people say anything about ONVIF, it is simply par for the course and a continuation of the abuses that ONVIF has allowed for years.

If a camera actually is ONVIF compliant (Profile S, h.264) AND also happens to support (proprietary) H.265, like in the case of the Vivotek example above, then what is the abuse exactly?

For the record, Vivotek's and Samsung's H.265 cameras both work via ONVIF using H.264.

An H.265 camera can be perfectly Profile S conformant, since it is not required by the standard. We can debate whether that's right or wrong (or whether anyone cares), but they are still conformant.

An H.265 camera can be perfectly Profile S conformant, since it is not required by the standard.

We can debate whether that's right or wrong.

I think its right. Assuming Profile S is covered, h.265 is technically just an added capability. It would be a first if an added feature invalidated compliance.

Just summarizing my thoughts for brevity:

On the CODEC side

On the standards process

I predict it will be the most common technical question that people will ask in a year.

"We’re looking what will be Profile T. We’re also now starting to see the rise of H.265, so Profile T will incorporate that."

Maybe, but I think the prudent thing here is to not to guess, and just wait for the official ship date of the first Axis h.265 camera as confirmation. ;)

edit: thx for the info

Some developers also tested for interoperability using Profile T for video, ONVIF’s newest profile that is currently in development and is scheduled to be released by ONVIF in 2018. - Plugfest

It is unfortunate... I think a lot of h265 cameras will come out in 2016/2017. Vms will be forced to use proprietary drivers requiring longer development and slowing interop...

Silly that onvif couldn't speed this up, especially since there are only a few players in the space now.

Silly that onvif couldn't speed this up, especially since there are only a few players in the space now.

That's a reason why they are not speeding it up.

There are too many powerful companies on ONVIF's board that not only do not need H.265 but would benefit from hindering H.265 adoption.

There are too many powerful companies on ONVIF's board that not only do not need H.265 but would benefit from hindering H.265 adoption.

Hopefully they can knock out a couple more Access Control profiles in the interim.

Related: Can Axis Be Kicked Out Of ONVIF?