This seems like a gimmick: Western Digital enlists helium for 6TB energy-efficient drives 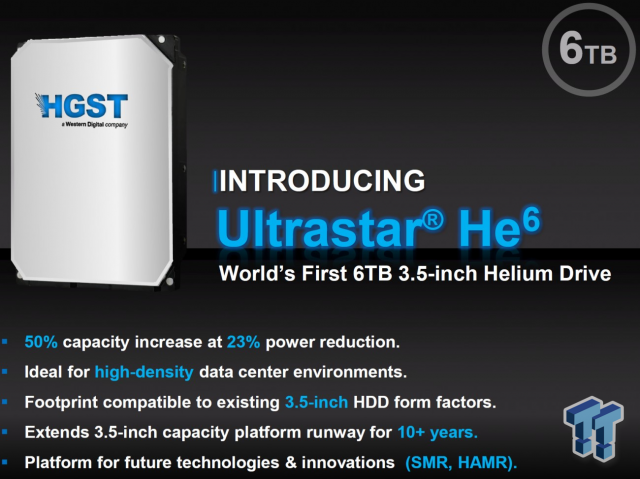 From the link: "Because helium has just one-seventh the density of air, using it reduces the turbulence caused by spinning disks and the heads that constantly move above them to read and write data."

This reminds me of the fad to fill automobile tires with Nitrogen. I also wonder if using Hydrogen would be an even greater advantage.

I am curious to get your thoughts?

Won't they float away if not anchored down?

Helium is a noble idea. Hydrogen is flamable. Exploding hard drive capacity should not reduce bytes to bits.

If turbulence is such an issue, why not just suck the air out altogether and let the disks spin in a vacuum?

The read/write head actually floats on a very thin gas layer, so vacuum would make it difficult to keep it at the correct distance. Hydrogen is a bad idea, since it diffuses through everything, including thick metal housings. That's also the main challenge for hydrogen powered cars, storing it requires the hydrogen to be either contained in bulky and heavy pressure tanks, kept at cryogenically cold temperatures or expensive metal hydride/chemical adsorbers. There is also the issue with hydrogens generous explosive limits, but in such small amounts, every cell phone battery is more dangerous.

i would think think that a vacuum would eventually suck contaminants inside the drive.

There is that... I was really being tongue-in-cheek though, in the spirit of the other comments to that point :)

In all seriousness, though... I get the concept (as with the nitrogen-filled tires), I'm sure the benefits are legit, but wonder if it's really worth the hoopla, OR the additional cost. Granted, I don't know what kind of premium one pays on these drives over a similar non-He 6TB model (if they exist)...

I know with the tire/nitrogen thing, it's a good IDEA, I understand all the ideas behind it (less prone to expansion when heated, larger molecules won't leech through the tire as readily), but the fact is, the regular air being compressed and pumped into the tires is already 79% nitrogen.

I dunno, it reminds me a bit of a couple of ads I saw once in Car Audio Magazine many many years ago... one was an amplifier touting the benefits of their "SCAT" design - SCAT standing for Solid Core Acoustic Technology, essentially meaning they used solid rather than stranded wire for the internal wiring (with the requisite in-depth explanations of how this made things better); the other was for a CD head unit that made a big deal of the fact they used an optocoupler connection between the CD pickup and the rest of the deck's electronics... besides the noise isolation, they claimed better sound because the optocouplers moved signal "at the speed of light - that's fast!" (yes, I remember it used that exact wording) - uhh, last I checked, electricity moved pretty near the speed of light as well, close enough that any differences would be irrelevant over the few millimeters involved.

I think the main benefit is that it exists. 4tb was the limit previously.