Some Asian manufacturers keep sending me news about 900TVL cameras. At first I thought that they were talking about HD-SDI cameras but after digging a little bit and with no clear answer this is what I assume:

Has anyone tried these cameras before?

Even though a normal DVR would not show the 900TVL camera's full size image, the low price could possibly be very attractive for the analog market. So I wonder if there is an opportunity here. Please share you technical and market knowledge on this.

HD SDI is something totally different, using digital signals rather than analog, requiring a completely different encoder/DVR. HD SDI has many weaknesses but unlike 900TVL actually offers HD resolution.

Btw, if you want to look at analog alternatives, there is also 960H, which fits in between traditional analog and HD SDI.

"...these work with conventional DVRs while magically increasing video quality even though the rest of the infrastructure (e.g., the analog encoder) does not support those higher TVLs."

If nothing else, I suppose one can apply "weakest link" theory... not that that's saying much when it comes to analog video systems.

Well if these are on conventional DVR and NTSC standard then...

NTSC color encoding is used with the System M television signal, which consists of 29.97 interlaced frames of video per second. Each frame is composed of two fields, each consisting of 262.5 scan lines, for a total of 525 scan lines. 483 scan lines make up the visible raster. The remainder (the vertical blanking interval) are used for synchronization and vertical retrace. This blanking interval was originally designed to simply blank the receiver's CRT to allow for the simple analog circuits and slow vertical retrace of early TV receivers. However, some of these lines may now contain other data such as closed captioning and vertical interval timecode (VITC). In the complete raster (disregarding half lines due to interlacing) the even-numbered scan lines (every other line that would be even if counted in the video signal, e.g. {2,4,6,...,524}) are drawn in the first field, and the odd-numbered (every other line that would be odd if counted in the video signal, e.g. {1,3,5,...,525}) are drawn in the second field, to yield a flicker-free image at the field refresh frequency of approximately 59.94 Hertz (actually 60 Hz/1.001). For comparison, 576i systems such as PAL-B/G and SECAM use 625 lines (576 visible), and so have a higher vertical resolution, but a lower temporal resolution of 25 frames or 50 fields per second.

Of course this does not address the compression of video at all.

Joshua, "Lines of resolution" or "TVL" is not the same as scan lines. While NTSC analog is made up of 525 horizontal lines (two fields of 262-1/2 horizontal lines interlaced), which is what you are referring to, Lines of Resolution is the maximum number of individual vertical lines you can see on a square section of the screen where the width is equal to the full screen height (3:3 vs. 4:3) before they blur together.

NTSC is typically limited to approximately 500TVL though some "tricks" can extend that somewhat. 900TVL is not possible with either NTSC or PAL. Essentially, 960H technology requires special encoders (and monitors?) to take advantage of the additional resolution, although we tested one 960H camera with a 960H encoder and saw no resolution increase over 4SIF/D1.

I agree I do not see much improvements in resolution between an 760H and 960H sensors but a slight improvements exist. I wonder if a similar improvement is possible with the 900TVL cameras contraty to what you technically explained.

I bet if you look at the cam spec it will state NTSC or PAL just like all the other analog devices.

Joshua what does that imply? Does that mean that if the spec says its an NTSC camera the resolution or details in the image cant be much higher than a 500TVL NTSC camera?

I agree there is a noticeable difference in 700TVL analog cameras and 480TVL cameras. Not sure if there is that much of a difference in 700 & 900? There is a limitation in the amount of information that can perceived based on the system implemented. Considering the highest compression resolution available is 720x480 (NTSC) for encoding the analog signals from these cameras you would think at some point the extra information is lost.. Unless there are some special monitors for displaying this extra information?

How noticeable is this difference? Also, there are many 560TVL cameras available, begging the question how much of a noticeable difference is there between 560TVL and 700TVL units?

Noticeable - the picture looks better. I can't give a specific amount. It also has to do with better supporting components. The analog pictures do look better but I don't know how much more room for improvement there is before its not noticeable anymore...

You are comparing two new cameras, same manufacturer, same series, just different TVLs? I am trying to understand how much of the difference is from the line count increase vs other factors?

Same here because every time there is a line count increase there are also better supporting components. I think it's reached the upper limits of actual distiguishability (new word) with the limitation of (720x480) NTSC compression resolution.

Most of these analogue camera's with 720+TVL use 1.3MP sensors (All the re-branded sensors come from a Korean manufacturer).

From what I have seen the performance is the best I have seen for standard conditions in analogue world. The prices for these cameras are also very good.

Although I only tested one 960H camera (Vitek) with a 960H encoder, I didn't see any difference in resolution between it and a good 600TVL camera through a 4SIF or D1 encoder. Considering the limitations of analog, I wasn't surprised. Pixel counts mean little with analog once you reach approximately 500TVL.

And despite D1's supposed limitation of 720 horizontal resolution, it cannot capture the full resolution of even 470-480TVL analog cameras. That was proven in a series of encoder tests we performed last year. We tested Avigilon, Axis, Bosch, Sony, TKH, Verint, IndigoVision, Pelco Endura and Dallmeier encoders and not one of them was able to provide encoded resolution anywhere near what we obtain from 480TVL to 600+TVL analog cameras fed directly to Orion and ViewZ 19RTC monitors via a Pelco 9780 matrix. Not even close!

We have some analog cameras on order with a new Sony 1.3MP Sensor. The image is the best I have I have seen on an analog camera. But it is still nowhere near SDI or IP cameras that are even 720p. Its not even close to being 720p which is how the Chinese market it. Even when plugged directly into a monitor, it still doesnt get near a 720p IP camera.

Like others have said before, you have to apply the weakest link theory when dealing with Analog. Even 960H DVR's arent anywhere close to being 720p. Heck its probably not even as good as a D1 IP camera. I agree with Carl, 960H offers no real improvement over 4CIF/D1. I've had arguments with people over 960H but when you compare a D1 image to a 960H image, there is no improvement at all.

With that being said, the new analog CMOS Sony Sensors that are coming out do provide a nice Analog image, it is an improvement over the wildly popular 960H Effio sensor that Sony release a few short years back, and they are very cost effective. Which is why we have some on order right now in China. I honestly cant see Analog improving any more though. I truely think its at its upper limit right now.

But no, you wont get 900 TVL from an analog system after you figure in all of the equipment. 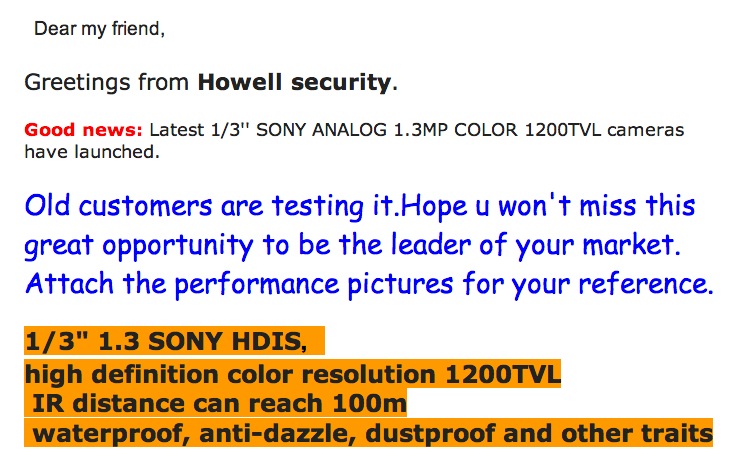 I think that the term "anti-dazzle" refers to Honeywell as a company. They haven't dazzled me in years (if ever).

On second thought, that announcement itself is dazzling in so many ways, LOL.

Lol. I ve seen this too! I want to get my hands on one of these just to witness for myself those chinese creativity.