I have been working with cameras for many years. I am very used to punching camera numbers in to get around my system. Since moving to Security Desk, this only works sometimes.

First, I cant see the camera number as I'm typing it in, which messes me and my coworkers up alot, especially when there is part of a number already typed in. Second, after using the mouse for anything like the "dashboard" controls, I cant punch numbers in again until I click on a camera.

This seemingly simple thing has been the source of a lot of problems for us, and slows us down alot. It makes me question our choice of using Genetec at all. Did not have these problems with their old Omnicast program, but Security Desk just does not feel friendly for simple users. The camera search is just not fast enough for watching things live, and the mouse controls are too clumsy. I've lost my place in playback alot because the "goto live" button is right next to the fast forward button.

Has anyone else had the same problem with camera numbers? More importantly, does anyone know any fixes?

Undisclosed - Yes, I remember the older Omnicast versions having good support for punching in numbers for quick camera callup, but these features were dropped in later 4.x versions of Omnicast or didn't migrate over to Security Center. I am forwarding this to some sources I have at Genetec and see if I can get a good answer for you.

I will admit the first few times I used Security Center, after being used to Omnicast, it was a little confusing and took some getting used to.

Typically the MonitorID is listed in the toolbar at the top right corner of the Security Desk application. No need to repeat the monitor ID for the next command if it’s for the same monitor.

Give it a try and let me know? Btw- the placement of controllers can be frustrating, a workaround may be to setup shortcut keys or use the playback from the tile itself instead of via dashboard?

Undisclosed - I received a quick reply from an integrator friend who uses Genetec:

Camera ID can be enabled via the Option screen, under User Interaction. Show Logical ID.
This will show the logical ID next to each camera.

Unfortunately, I don't have a Security Center system at my location to test this with. Does this help?

Edit: Sarit and I posted the same answer at the same time...

I believe a bug request has been submitted for the first case.

Ok, first thanks all for the replies.

Yep, we know how to punch in camera numbers.

It is just not very good. No visual feedback like in Omnicast, it doesn't show at the top of the screen what numbers you are typing. Pressing buttons on the dashboard, like preset buttons, screws this up. We found you have to click on a tile again afterwards, even if one of them has a yellow outline. And if you punch a number in wrong, no matter what you do nothing will bring up a camera until you press escape! In Omnicast I would type in a wrong number, hit enter, and then type it in right and it would work - not so with Security Desk.

Seth: Thanks. We are using the most recent version of 5.2 (SR3?) and this works ok with monitors. But the monitor numbers are totally random. I am on a computer with monitors 415 and 449. And its different numbers if someone else logs in. No idea how to make this normal for everyone - we just want monitors 1 - 12.

I everything else about Security Desk but this is a real stumbling block for us.

You can assisgn new logical ID's for the monitors.

Open Config Tool, System - General Settings - Logical ID. Select PC and Analog monitors from the drop down, and you can reassign the monitor IDs for your operators.

As far as visual feedback goes, if you use the MONITOR . TILE . CAMERA syntax, it will show an indicator. But I would agree with you, it's not as easy as it was in Omnicast. I've submitted a bug request on it, in fact.

Thanks Seth. We will see about changing the logical ids of our monitors.

Where do you see an "indicator"? I'm looking for the kind that tells me what camera number (logical id) I'm typing in. I see the monitor number, and the name for the current camera in the tile, but nothing that does this while typing. This is where a lot of our problems happen, because someone double types a number, or already has a number typed in. I have seen people lose 10 minutes just trying to figure this out because the numbers never clear out. We're training everybody to recognize this problem right now, but its cause a lot of frustration.

Glad you have a bug open. I have not done this for any "feature requests" yet, but its a great idea.

I received the following response from a source at Genetec:

Thanks for bringing up the issue. Hearing these challenges gives us a better understanding of what is affecting operator usability. As you noticed, some features in Security Center are exposed differently, as it is a new platform with a completely redesigned user interface. This was done to allocate room for additional capabilities in the platform, although our goal was always to minimize the impact this would have on our existing users.

In Security Center, the Keyboard Context Display will only be visible as you control a remote monitor, but not if you control your own local monitor. We will take that as feedback for future enhancement. As others have already commented (thank you John, Seth, and Sarit), a few options are also available in the product, which the user must activate in the settings.”

Here is another response from a different Genetec source:

I’ve passed the feedback along to our UI team. I like the suggestion about displaying this box all the time, instead of only when a different workstation’s monitor ID is entered.

Here are a few other things that can help keep the workflow as easy as possible (some of which they may already be doing):

1. Save the most common cameras as public or private Monitoring Tasks, reducing the need to call up different cameras, manually. Just Right-click on the task’s tab and hit Save As.

The saved tasks can be retrieved under the Home Button > Tasks: 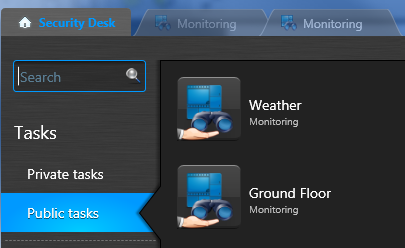 2. Configure Visual Tracking in the Config Tool, so that switching from camera to camera can be done easily. This may work for some groups of cameras, without worrying about entering cameras ID’s 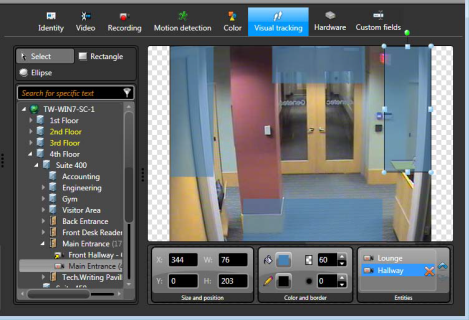 The IDs will then be visible from the list in Security Desk:

I’ve also attached the full keyboard sequence to call up cameras on a specific monitor & tile, in case it’s helpful.

Here are links to the files attached to the reply: Displaying Logical ID's and Displaying Cameras with the Keyboard

Thanks for the (very quick) response. I like the keyboard context display, its exactly what we need.

Security Desk has lots of great features, including visual tracking. We may set it up in the future. Right now we have a lot of people who have all the camera numbers memorized, and are feeling slowed down (myself included) by struggling with Security Desk just to do some simple navigation that most long-time surveillance people think of as "step 1" in using cameras.

Its great, and rare, to have this kind of responsiveness from developers on such a large program. Thanks again.

Glad we could help...

I think it's important to note the use cases and the type of environment that the system is being used in. A small property with less than 100 cameras is very different from a casino with 1,000+ cameras.

Custom layouts and visual tracking are both great options in certain scnerios. The camera tree works well when doing an investigation. But for an operator in a fast paced or critical environment these options are a bit less relavent and go out the window during a critical response event.

Sometimes it seems that with all the complex options offered on today's VMSs, the little things that seem so obvious and important to an end user gets dropped by a developer that is far removed from the operations side.

But for an operator in a fast paced or critical environment these options are a bit less relavent and go out the window during a critical response event.

Custom layouts and visual tracking are exactly the types of features that get out of the way and allow an operator to work quickly in these types of situations.

I would agree with you that overall, vendors/developers have a hard time keeping up with how users are working with the software in the real world. However, one of the reasons I appreciate and have partnered with Genetec is due to their fast response in patching their software, adding new features, and listening to end-users. They have implemented a handful of my own personal feature requests in the last two years- one was added within a couple months.

I couldn't agree more Seth. The live Picture-in-Picture on Visual Tracking came from yours truly!

I also agree with the sentiment that especially with the development of Security Center, it has been annoying at times when we've upgraded a customer out of features. All-in-all 5.2SR3 is at least miles ahead of 5.0LA