I really hate it when manufacturers don't provide the field of view in their specifications. They will often provide all sorts of other esoteric specs but not field of view. This seem really crazy to me since this is an important part of determining the right camera for an application. Are they hiding something?

Michael, I've asked Samsung to comment here. Let's see what they have to say.

I agree with you about the output of other lens calculators vs the 5080's specification. I do not have a guess about why it's different.

John, IMHO this could be related to that sensor size discussion we had a while back. Most calculators that I looked at back then seemed to have only 4 or 5 formats to choose from. This Misumi calculator though has a bunch of 1/3" choices that all have slightly different actual sizes. Choosing different ones can make the H-angle go from 70 up to 93.5, though I will admit I could not find one that goes exactly to 94.6. Also searching for 94.6, 2.8 and 1/3" brings up numerous cameras with these angles. Ominously one of them is the new Samsung 1280H camera. Shockingly Samsung's own angle calculator tool gave neither the expected nor the actual value, despite the fact that you have to choose the model from the drop down.

Rukmini, that's a good hypothesis. There may be a range of sizes all grouped / marketed as 1/3". I don't know enough about sensor suppliers / models to confirm or deny this. Anyone have experience to share here?

In addition to the sensor size variation possibility, remember that actual back-focus distance will affect FOV, and assembly tolerances may even mean a slightly different FOV from one camera to the next within a model line. I wouldn't be surprised if a manufacturer may measure the FOV on a number of finished cameras and then pick the numbers that are most favorable for the marketing.

Slightly related example: back when I was working in car audio, it was common practice (probably still is) for amplifier manufacturers to measure amp output at maximum supply voltage, and use that as their power ratings. Since an automotive electrical system regularly varies between 12V and 15V (with dips and spikes well outside that range), you'd get substantially more measured output power when providing the rails with 25% higher voltage, which looks much better on the ad copy... but also means you get significantly lower output when running on battery (engine off) or at *normal* operating voltages of 13.5-14V.

At that time especially (early 90s) the "wattage race" was similar to the "megapixel race" with everyone trying to come up with some new trick or edge to have better numbers than the other guy, which as often as not with cheaper models included conveniently omitting (or small-printing) specs like THD (total harmonic distortion), which is a product of signal clipping caused by pushing the output past the rail voltage - gives you a lot more measured RMS output, but sounds like crap; this might be considered analogous to low-light or low-noise specs on high-MP cameras.

Since there was (and AFAIK still is) no industry-standard way to specify output, let alone any regulatory controls, there was no way to really know how accurate or meaningful those numbers were. The high-quality, "professional grade" amps used regulated power supplies, meaning they would give the same output across the entire output voltage range, so if you were buying a 200W amp, you knew it would give you 200W all the time (these were usually very up-front about THD and other related numbers as well).

I used the Samsung as a benchmark (since they do publish their FOV) to compare to the calculators. My experience is that the numbers they publish are realtively accurate. Thus, it seems to me that the calculators are pretty useless. I see a pretty wide varilation in the published FOV for similiar chip size and lens. Is there any real way to estimate the FOV for manufacturer that don't deem it important to publish their FOV or soes this need to measure in a lab by the manufacturer?

Realistically, ANY of these calculators (FOV, bandwidth, storage, etc.) should only be used for guidelines. As noted already, there are so many other factors that affect all of these specs that a calculator can't account for - when it comes to FOV, for example, on a camera with adjustable backfocus (box cams, generally), try moving the sensor back, and you'll get a slightly wider FOV; the downside is that if you move it too far, you may not be able to get a sharp focus.

Is there any real way to estimate the FOV for manufacturer that don't deem it important to publish their FOV or soes this need to measure in a lab by the manufacturer?

Well ultimately its just trig, the problem is that you need to know the exact size of the horizontal and vertical dimensions of the imager. If you know that and as long as the manufacturer is showing you all the pixels its hard to see how it could be much off. Though may have to the calculation yourself, since your limited to predefined imager formats.

Of course if the lens itself doesn't really have a 2.8mm focal length then, like Matt said, you might get a degree or two out of the back focus adjustment but I think it wouldn't be the sharpest theoretical picture.

The good news is that for the larger sizes of sensors there is no legacy fractional inch format, so the size stated is the real size. For instance with the old H3 Avigilon cameras notice how they describe the sensor in fractional inches at the top with the imaging area at the bottom.  Do the math and you will see that the horizontal and vertical dimensions do come close to making a diagonal of 1/3.2".

Whereas on the new larger sensor for the H4 everything works out, because its not stated in fractional inches, but in decimal inches.

Of course if the lens itself doesn't really have a 2.8mm focal length then, like Matt said, you might get a degree or two out of the back focus adjustment but I think it wouldn't be the sharpest theoretical picture.

This brings up another good point: how accurate is the lens's stated focal length? I mean, we're mostly talking about <$100 lenses here, not $3000 professional SLR glass. Is that 2.8mm lens REALLY sporting a 2.8mm focal length, or is it closer to 2.6mm or 3.0mm? What are the manufacturing tolerances? Design tolerances? As with sensors, I suspect there's a fair bit of variation in individual product lines - combine a 1/3" sensor that's actually 1/2.85" and a 2.8mm lens that's really 2.7mm and you've added a few degrees right there. Make that 1/3" sensor actually 1/3.1" effective area and a 2.8mm lens that's closer to 2.86mm and now you've lost a few degrees.

Computer monitors and TVs are a good example of this - you don't see "40 inch" TVs so much as you see "40-inch-class" TVs that are probably closer to 38.6" diagonal, or something.

A lens designer told me that it could vary from manufacturing lot to manufacturing lot, but that their QC procedure was to reject as defective any lenses found to vary more than .1 mm from the stated size. He did imply that other manufacturers were not so scrupulous. He also told me that these variations are the reason why lp/mm and chromatic aberration are different from lens to lens, and that they compare the chromatic performance and lp/mm on each lot against an established baseline.

That's why you'll have photographers try five or six lenses on their own cameras before settling on the one they like best (if any). The process of taking sand, carbon carbonate, and silicone carbonate, melting it, and then grinding it into a very specific shape is still subject to a thousand different variables, only some of which are subject to human intervention. Every lens is different for the same reason every bottle of wine is different, and the best we can do is to try to get them all to be more-or-less the same, and to pick out the obvious duds before they get sold and used.

Also why professional-grade lenses come with their own individual test charts. Sure it's a little extra time and expense for the manufacturer to test every lens and bundle its results, but when you're paying hundreds or thousands of dollars for a lens, it's not really much to ask.

Actually the typical size of a 1/3" sensor is less than 1/4", Brian equated it to nominal lumber sizes. Though your point still stands that even then there can be variances. I'm going to measure my television now, Samsung of course.

Sorry to resurrect this conversation, but my question is this: whom do I believe when the calculator and the spec sheet is off?

I'd trust the sheet.

The calculator uses formulas and may not be using the exact dimensions of the particular sensor (1/3" is only a diagonal approx), or a particular lens, esp wide angle ones.

The spec sheet should be empirical.

I tend to believe manufacturer AOV specs. I haven't seen anything that leads me to believe they're off, so far.

Also for what it's worth, cameras in the calculator/finder use the manufacturer AoV spec, so if you select a DS-2CD2132F-I, you have the option to select the 79° AOV. 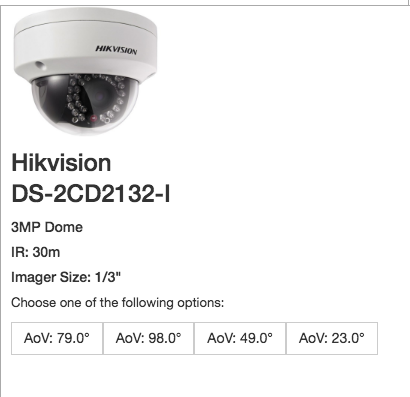 We had an issue with some FLIR cameras recently. It was our mistake basing our product selection on focal length alone. We assumed, incorrectly, that similar domes using 1/3" sensors would give similar AOV with the same focal length. However, what we found was that the varifocal lens used on the 1/3" sensor camera was made for a 1/2.7" sensor, which made the AOV at the 2.8mm setting about the same as the 3.6mm fixed version that had a matching 1/3" lens.

Moral of the story, use the AOV as your basis, but test, test, test.

Also, some lens manufacturers publish this information as well, as in this fuji lens. 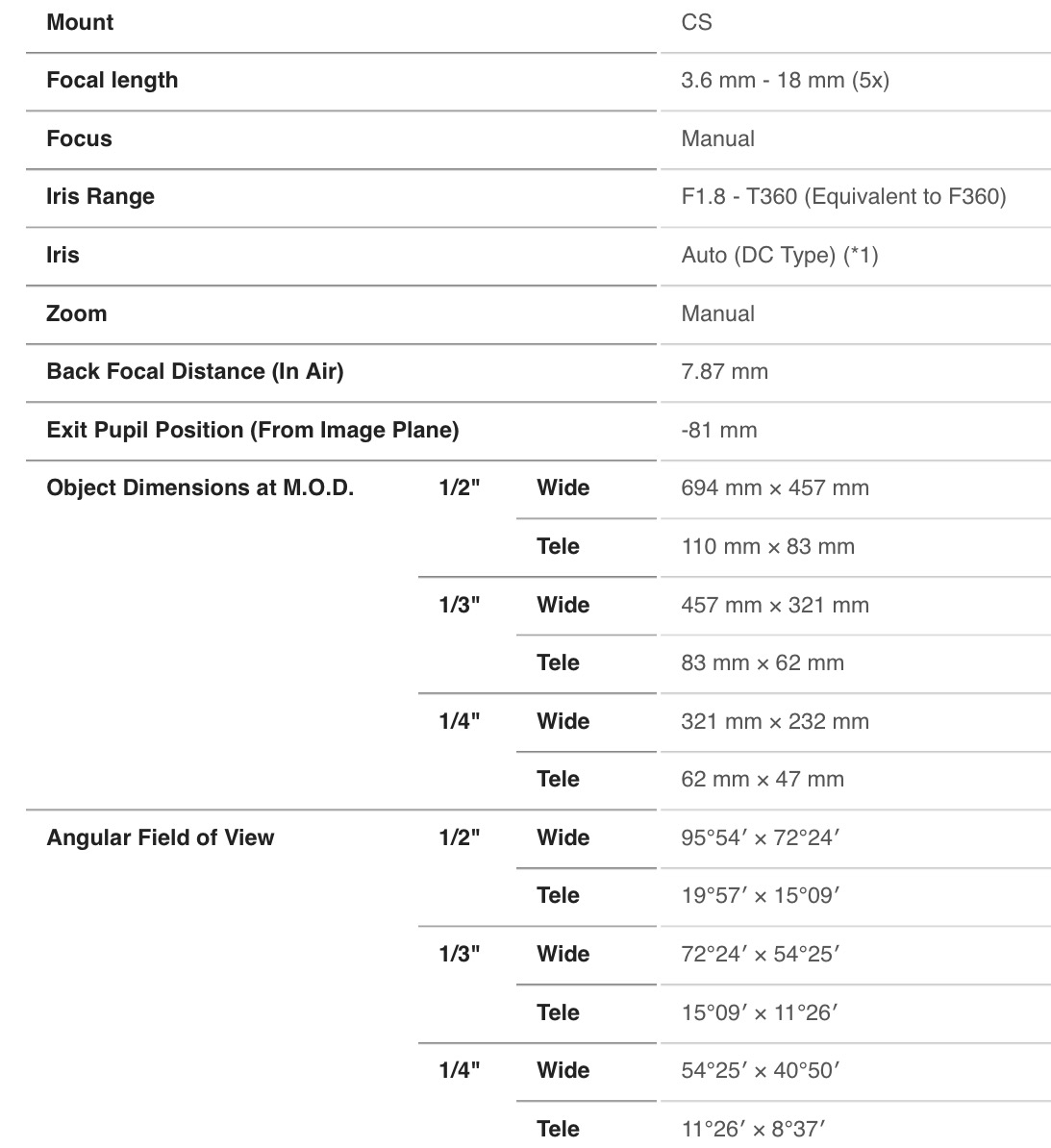