Both the presence and absence of video surveillance is playing a key role in Ferguson.

Controversially, police released a video that appears to depict the victim robbing a store and assaulting an employee, as shown in the clip below:

Some felt this was prejudicial and irrelevant to the shooting 10 minutes later.

Others argued that this provided context to his later interactions with the police.

Unfortunately, during the shooting, there was no video surveillance nor recordings from personal phones, with only a limited number of eyewitnesses.

This has increased calls for the use of 'body cameras', something that one study we covered shows has the potential to reduce the amount of police violence / misconduct. And even if there was none here, it would provide better evidence of the officer's innocence.

Indeed, a White House petition calling for mandatory use of body worn cameras has already gained enough signatures to get a Presidential response.

It is certainly on the rise and each time there is an event like Ferguson, it gets a big push. On the other hand, many police departments are likely to fight it, e.g., see NYPD Ordered To Use Body Cameras.

This pistol-cam automatically engages when unholstered, recording both video and audio to local storage. They might miss alot of the context of a shooting, but unlike even body-worn cameras, they are virtually guaranteed to be pointed on target at the critical moment...

Sure, they look a bit clunky, but if they were required by law, I'm sure the gun manfacturers could come up with a low profile version, maybe even with a side-viewfinder for looking (not shooting) around corners!  Anyone know why they are not more in use?

"Anyone know why they are not more in use?"

Nobody can find a holster?

"Don't worry, I won't shoot! I'm just filming you for your own protection!" 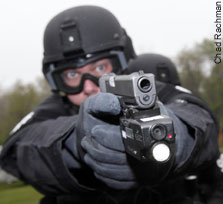 I would love to see reviews of that from actual use.

How do they deal with the flash from the round firing not affecting the video? Is there any stabilization of the video?

I could also easily see residue from the discharge obscuring the lens rather quickly. I have an tactial light on my USPC, and after a couple of shots you can see small buildup on the front lens of the light.

The thing sucks living hell no doubt, and is the bane of any and all LEOs required to use it! Though the picture was simply used to introduce the concept of a pistol-camera into discussion, not as a ebay 'buy now' suggestion.

How do they deal with the flash from the round firing not affecting the video...after a couple of shots you can see small buildup on the front lens of the light.

Neither one of these should affect the video already recorded prior to the moment that the trigger is pulled. Please correct me if you disagree, but the big question in these shootings is what is the state of affairs present at the target position when a willful decision to engage lethal force is made. You know, like was he trying to surrender when fired upon. Once that decision is made and the gun discharged the first time, the big question changes to how many rounds were discharged and over what time period. Even with a small buildup on the lens, a recorder w/audio should be able to provide that.

But to your point, since its basically trying to be a universal add-on to some of the world's finest engineered firearms, with their precise weighting and field-tested ergonomics, its gonna bring the whole thing down a notch or two. :(

Though there is some hope that a firearm manufacturer would see this as an opportunity to do it the right way and apply their skills to integrating a high-end recorder as seamlessly as possible.

Take for instance this Heckler tactical, similar perhaps to the one you carry. If instead of the light ( or in addition to ), a camera lens/sensor could be fitted, maybe then a no-compromise system could be the result. 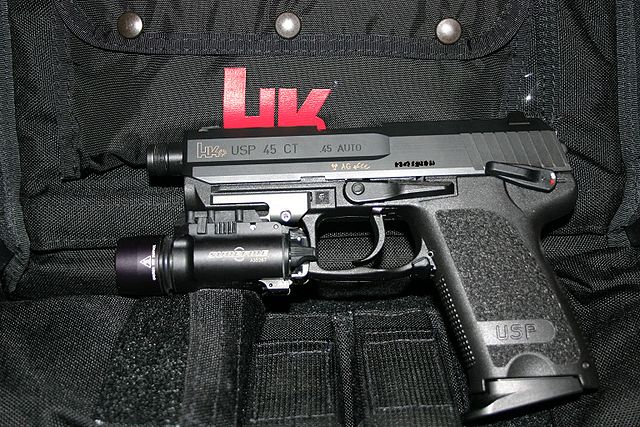 One question though, where did you get your holster? (Because who knows, maybe it would fit the add-on pistol cam?)

Not only does it reduce police violence/misconduct but it also help fill in the gap... that is when the camera works correctly. As I understand it from a few police officers I know, some cameras have a couple of steps to engage the camera and start the recording. While I would personally turn it on as soon as I arrived on the scene, I know there are times that you arrive and hit the ground running. Imho, who is going to remember to turn the darn thing on if you're being attacked? Much less if you have to go through more than one step? Too easy to say the cop didn't turn his camera on...but most don't understand how quickly things happen. The last thing I'm going to think about is turning my camera on when I'm being attacked. I'm sure I'm speaking to the choir here. Having said that, I do believe it should be mandatory in all police departments however I understand that some depts. have limited budgets. Its just a good thing that most of these body worn cameras don't cost very much.

As for the video shown here, I was rudely awaken to the character/nature and size of Michael Brown. The video, for me, shows a very large individual with agressive tendencies. A far cry from the "innocent, law-abiding" citizen I first envisioned. Granted I only caught glimpses of what has been occuring until I saw this video so my opinion on the situation was taken off of very little information.

Btw, the store where the surveillance video was recorded is trying to dissociate itself with the police:

"The owner of the store dispute the claim that they or an employee called 911, saying a customer inside the store made the call. They also say St. Louis County issues the warrants for the hard drive of surveillance video Friday.... The attorney says this market has been in the community for a long time and they hope to continue serving this community."

The store has been looted.

the store owner is clearly in a no-win situation here....

of course if dudes can just come in and take your stuff and smack you around without you calling the police, it doesn't sound like it was an ideal retail environment to begin with for this store owner.

Either way, they have to sell that store now. Before it gets burned down by one of the not few locals with no other obvious way to vent their frustration at the situation.

Sidebar: Will the long haired skinny kid that was with Brown - both at the store and in the street - be charged with the cigar robbery? Or will they not charge him to avoid further unrest?

Skinny kid appears to place cigars on counter in the first seconds of the video. Only Brown was said to be brandishing cigars in the street. Regardless, I don't think they would charge him at this point if he walked out with a case of Cohiba Robustos...

I am also a police officer. I work in a small agency in a small county. Though I don't believe each department in our county has made them mandatory, most officers have and use body worn cameras as well as car cams and Taser cams.

The one thing we don't like about Taser cams (and I think the gun cams would present the same problem) is that recording starts the moment you activate the Taser. Usually by that point the recording has missed most of the beligerant rantings of the suspect. Then the video mostly shows compliance as the bad guys usually change their attitudes. Car cameras can be set to "back up" and record the previous 60 seconds or so. That way the video shows, for instance, why you stoppped the suspect in the first place.

But another thought on police cams is... What happened to our testimony? It is sad that there is so much distrust in law enforcement that our word is not good enough. But I also understand where that mistrust comes from sometimes. I personally like the cameras. And I really like my cameras when someone complains on me wrongly not knowing the whole thing is recorded.

The one thing we don't like about Taser cams (and I think the gun cams would present the same problem) is that recording starts the moment you activate the Taser. Usually by that point the recording has missed most of the beligerant rantings of the suspect

Though there is no technical* reason I can think of that the weapon cam couldn't pre-record a minute of audio only (butt mic?), that is continually overwritten, as a preamble to the video when it is recorded. So maybe coming soon?

Two questions if you feel like answering would be,

1. When you are dealing with a situation, and you are aware that the car cam and/or body cam are capturing the incident, do you ever feel to tendency to play to the cameras, e.g. try to have someone clarify something audibly or repeat something to make sure its captured?

2. How do you react the typical annoyance of say pulling a driver over for dui, and having his friend record everything on cell phone video, with an attitude as if he's recording the next Rodney King incident?

*whether its legal and/or whether the police unions would fight it is another matter.

Jason, thanks for the recommendation. Is it this one?

Is low light a practical problem for you? The spec says minimum illumination is 1 lux, which generally means its poor in low light. There does not seem to be IR integrated into the unit.

This is the most common model/style around here :

I mostly use mine on traffic stops so there is usually enough light. Even when not, the audio seems to do the job anyway. Better than nothing I guess. It looks like this is going to open the door up to some new product development to address the low light issue. I bet it would be difficult to achieve low lux with todays tech. Even if IR that tiny could throw far enough to benifit, the glow would create a target right on our chest to shoot at.

We have actually just ordered this model. Our current models are lower resolution. But even those produced amazing results in decent light. Can't wait for the new one to get here. But I am a camera geek too.

We looked at the one you linked but decided that they might be too large and cumbersome on our uniforms though the added features are probably worth it.

Ferguson just released a statement saying they're committed to raising funds to add dash and vest cameras to their units. Bullet point 3 below. 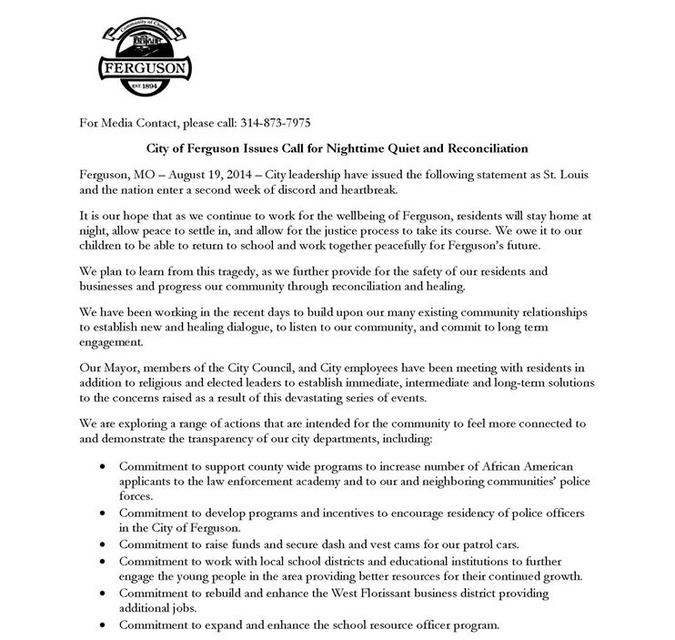