Tab, some kind of motion sensor contact thing. Weather resistant, they say. Works with the camera interface. $29 Available for pre-order. No specs or details or solid information of any kind.

It's sort of an intrusion detection system? Help me understand...

Details are thin, but it looks to be an accelerometer-based, -wifi bluetooth low energy (BLE) connected tag. 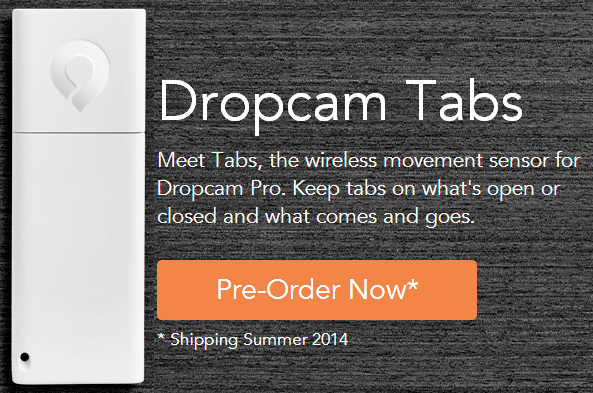 Dropcam already includes a notification feature through the app. It would appear these tags use the same feature to alarm when they are disturbed.

Details like power source and range are pending their response, but as soon as they reply I'll post it here.

EDIT: Tabs are only compatible with Dropcam PRO cameras (not v1. or 'HD' model cameras). The camera itself is a BLE hub, which it has not taken advantage of until now, so apparently "Tabs" have been a development long in the works.

How does it differentiate between a burglar opening the door or window vs a family member? Presumably, they are going to add an arm / disarm feature?

I dont think they are looking to market it as way to replace the alarm system. Like they show in the video, it is more for internal family use. Just like they didnt market their cameras for security.

"Just like they didnt market their cameras for security."

Btw, this quote from Dropcam does explain the overall business motivation:

"This is part of Dropcam's broader strategy to build out a platform, rather than focusing on individual hardware items. By focusing on the software aspect of the tools and how devices can work together, Duffy thinks his company has a shot at making the idea of a "connected home" a reality."

"Dropcam is adding a new feature called people detection for its Cloud Recording subscribers, which Duffy says is about 40% of its users. According to Duffy, people detection is one of the service's most-requested features.

Dropcam won't be able to identify individuals (yet), but it can tell the difference between the movement of a human and that of a dog or cat scurrying around.

The detection, which Duffy says requires almost as much computer power as all of Dropcam's other services combined, takes place instantaneously. Users can choose to receive movement alerts related to a human in an area, but skip getting other types of alerts."

Woah. 40% of Dropcam owners pay for the cloud service? That is a lot of RMR.

Getting closer to not needing any type of alarm system (other than Dropcam) at home....

Update, Dropcam has cancelled pre-orders for Tabs and the whole product right now is in limbo, as they work out the Google acquisition.

I can basically tell you why they are doing this. Currently it records 24\7 even though it has motion detection. People usually buy 1 DropCam and like it so much they go out and buy 2 to 7 more and when they go to set them up...they are majorly disappointed due to bandwidth and the storage. They assumed, like most people, that it could record on motion only. DropCam has received hundreds of requests for this. The reason they have not did this yet is because they track movement at the server.

This new thing makes sense of what they will do to make people happy. Without recording, DropCam is basically worthless.

This new thing makes sense of what they will do to make people happy.

So then cancelling the 'new thing' makes sense of what they won't do to make people happy?

Without recording, DropCam is basically worthless.

For what it's worth, most Dropcam owners do not sign up for Cloud Recording.

Most likely, Nest favors it's own mature event detection technology over Dropcam's 'fledgling' one, and since they 'rule the roost', they will re-do it their way.