I was at Axis' website reading their benefits of IP video to share with someone I know personally who doesn't really understand IP video or its benefits. I sent him this link.

If you look at the bottom the first sentence under the "cost-effectiveness" tab says "An IP-Surveillance system typically has a lower total cost of ownership than a traditional analog CCTV system."

Does anybody else find this assertion to be outrageous?

I have a problem using TCO as a comparison metric regardless. Every end user defines TCO differently, and weighs the respective inputs differently.

My automobile's owner manual says "Change oil every 7,500 miles", while the Quick-Lube I use tells me to change every "3,000 miles." Is the guy who religiously changes oil every 5,000 doing it wrong? Whose recommendation should I use? The engine manufacturer, or the company who wants to sell me as much oil as possible? Does IP video have a lower TCO when an IP manufacturer tells me?

I contend the value/cost of ownership depends entirely on the customer, not on the people trying to sway my buying opinions. There's too much grey area tied up in such a claim.

I agree. I used to work for a company that was very heavy on TCO studies. Sometimes the variables are definitely favorable to their own agendas which at the end of the day are sales.

I have never understood that claim. I haven't put to much though into it, but given the camera's for the most part are still more expensive when you don't need all the fancy features, the servers in my brieft looks are more expensive, the only area you can save any money, seems to be the cable. Instead of running two, you run one.

"TCO" falls in the category with "religion" and "politics" in reference to things you don't discuss in polite company. All you'll ever do is argue in circles without convincing the other side.

TCO is typically code for, "My stuff is more expensive than the competitor's but somehow, through some miracle, it will cost less in the long run." I generally ignore these claims especially when they are stated so broadly.

Budalich, btw, you know what I hear is a great metric? Pixels Per Dollar.

It's great to see people courageously challenge Axis' marketing claims. Surveillance is highly fragmented; there are some cases where IP cameras yield great value for money, but they're not generally less expensive to own.

In 2009, when Mike Newton had the audacity to point out that IP camera-based systems often returned negatively on investments, which could be interpreted as pointing out that IP cameras sometimes cost more while delivering less, he was derided here for being a troglodyte. Time to apologize to Mike? :)

I don't think IP camera's cost more while delivering less at all. I just don't think they cost less over time compared to an analog system. In a few rare circumstances maybe, but for the most part, in my opinion, you will get more for paying more.

Dedicated Micros has been run into the ground. I don't think DM's CEO deserves any approbations.

Many of the claims are off the wall.

Btw, I just got their most recent financials and the decline is continuing. Will post an update momentary and link to it here.

Think about it this way, both DM and Axis made wrong marketing claims but since 2006 when their revenue was roughly equal, Axis revenue has gone up 5x while DM's has done down by 50%, creating a 10x advantage for Axis.

Thanks for the thoughtful replies, guys.

Daniel, I'm not saying IP cameras always cost more while delivering less! I'm saying that the system designer should be sure about the value he's getting when he chooses IP cameras. Sometimes the overall costs might not even be higher than alternatives, but decisions made without due consideration can certainly be costly.

John, I don't think your 2009 response to Mike Newton was, "Mike, your revenues would grow faster than Axis' if you embraced IP cameras." I could be wrong, but I recall that your response was along the lines of, "You are not reasonable to question the cost/value ratio of IP cameras." This current thread here is a great example of an enlightened discussion wherein people are questioning that very cost/value ratio. No one is saying it's black & white. It's certainly worth questioning.

By the way, DM changed tack in early 2010 to emphasize proprietary IP camera-based solutions (NetVu). Did embracing all-IP-cameras hurt DM, ceding their position as CCTV market leader? Whether all-IP-camera companies' margins and profitability are generally good and/or expected to improve rapidly is an interesting question; I suppose that would be the subject of a different discussion. Hats off to Axis, in any case, for having cleverly convinced nearly all of the industry's incumbents to spend large on supporting Axis' own brand identity.

Todd, you love making shit up! so I said? "You are not reasonable to question the cost/value ratio of IP cameras." Here's my original 2009 post.

In it, I said, "If this is DM's approach, I worry about their future competitiveness in a market migrating to IP cameras."

Guess what? My worries were right because they collapsed in that time.

And nice job on damning your competitor wih faint praise: "Hats off to Axis, in any case, for having cleverly convinced nearly all of the industry's incumbents to spend large on supporting Axis' own brand identity."

Say what you will about Axis but their product execution has been remarkable. If the entire HDcctv Alliance could come anywhere close to that of Axis, maybe you would be a real factor in the market.

Even though this is not about TCO, but initial cost I think it is relevant to the thread. I am not sure if this has been covered before. I like Mobotix a lot (except the propriertary part) but come on!, this table is a joke: 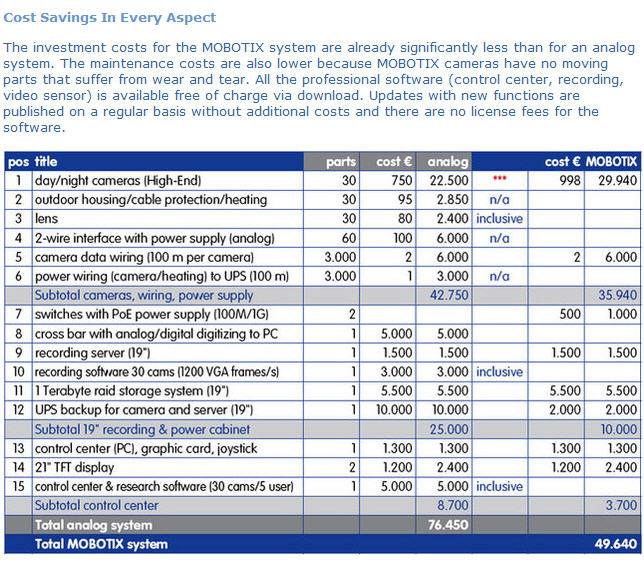 Vendor cost comparisons are just ridiculous. They either think everyone reading them is an idiot or the person preparing them inside the manufacturer is one.

I had not see than one from Mobotix before. They lost me on the first line - 'high end' analog cameras costing $750 :)

Seems to me it wasn't that long ago that our cost on the Panasonic WV-CW504 SD5 domes was around $650, so they're not TOO out of line with their $750 number. Of course, now I look up that camera, I see some places online listing them new for as low as $315.

Matt, notice they also are separately itemizing a housing and lens for the analog camera ($750 for the camera, $95 for the housing, $80 for the lens, $925 all in). That's crazy for an analog camera, even a high end one, even a few years ago.

That's not 750 dollars on that chart. It's in Euros. All in for an analog camera is roughly equivalent to $1,200 USD.

Good catch. This just gets worse and worse. Ok, let's agree it's too easy to pick on Mobotix and move to someone else :)

Let's not talk about pixels per dollar and stick with the topic of discussion :)

One factor that has been ignored in all of the discussions above is system and component life. That should be included in any discussion of TCO and is, I feel, the "dirty little secret" claims like Axis' refuse to acknowledge.

Over the years, I have found that high quality analog cameras and even high quality encoders often last 10 years or more. I have my doubts about IP cameras' longevity in real-world aspplications. For one thing, their circuitry is typically far more complex and for another, they typically run much hotter than the typical analog camera. I believe the two factors alone will lead to substantially shortened useful lives. That should factor into TCO discussions.

I would suggest that all costs should be factored in when discussing TCO: initial purchase and deployment costs, licensing costs and repair/upkeep costs. 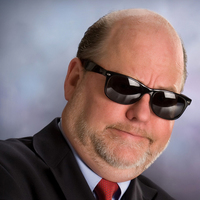 Fom my experience TCO depends on whose rice bowl you are serving from. Total gets pretty ambigious when most people manage budgets and not efficiency/output metrics that provide the basis for a serious cost/benefit ratio discussion. Cost is again relevent to ALL of the elements of implementing, managing and maintaining an information system (hardware, infrastucture, configuartion, network/storage management, IT resource overheads and outside contractor factors). Ownership is is the one element that can best contribute to the philosophical discussions/opinions about TCO in my experience. In the majority of the projects I have been involved with since 2001 IT was driving the ownership issue by delivering video as a many to many, end user business model. We didn't have solid long term cost factors so we chose conservative targets everyone felt were conservative but doable. When trying to get different stakeholders to share their rice bowls to make a fancy menu item (TCO) it can get ugly in a hurry.