Corner Mounting Cameras - What Angle Should I Use?

Corner mounting a camera to monitor a whole room comes up fairly often. How wide should you go?

Here is an answer based on comparisons from our Camera Calculator:

Notice 90° is actually too narrow for the full room, missing some of the sides and the bottom. By contrast, a 120° shot gets that missing area.

I suspect this is one of the reason you see a lot of HD cameras having 100°+ AoVs.

Agree. High MP and shortest focal to get angle and reduce dead zone.

We tested a panoramic camera vs. wide angle in our camera selection guide.

Despite the 360 being located in the center of the room (and it was an Axis M3007, which is 5MP), and the wide angle model needing to shoot all the way from back to front, detail was still better in the wide angle camera. 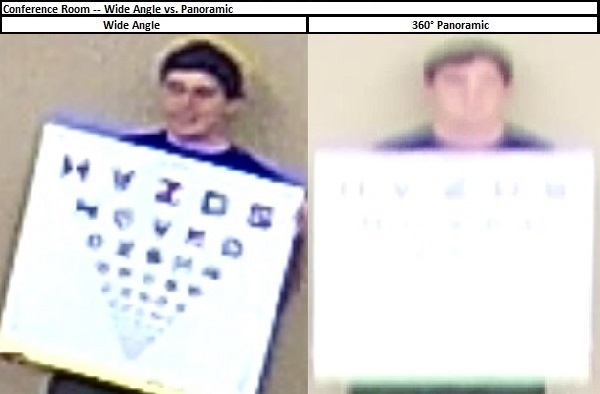 Agree. Which is why we use Computar 1.8-3.6mm varifocal lenses on analog cameras for those applications and have been testing the Theia 1.8-3mm lenses for IP cameras.

I did post a discussion about my observations on the Theia lens on a 720p camera. It has its pluses and minuses - the most blantant minus is that, compared to the Computar, the Theia's dewarping technology tends to make objects near the center of the FOV appear to be farther away than a non-dewarped lens.

The strangest thing is to pan the camera across a scene. As an object goes from the edge of the FOV to the center, it appears to recede. The huge downside is when the camera/lens is used in a corner, as in your example. The way a corner-mounted camera must be aimed (the opposite corner typically being the farthest point from the camera), the Theia's exxageration of center distance puts even less pixels on target in that area than a fisheye lens would.

I wish someone made the equivalent of the Computar in megapixel format without the dewarping. The fisheye effect never bothered us with analog cameras...

This looks bizarre to me. We have 90 degree cameras that cover very well the 2 walls, but the condition is of course that they are mounted completely into the corner, as soon as you them out of the corner the necessary angle increses... If the above left picture the camera is entirely mouinted in the corner, to me it does not have a 90 degree angle..

Agree, but then the vertical angle also is important, because that is the reason why you have to lower the view in order to get the floor covered. And then it becomes narrower on the top view...

Have you verified that it is 90° or less? I ask only because it's uncommon (1) to spec cameras in AoV and (2) few cameras are 90° (either notably less or more).

That might be correct, the table of the supplier that maps focal length to angle indicates that 2.8 mm is exactly 90 degrees. And that's a 2.8 mm fixed lentgh lens in it. May be i have to measure once...

The camera is mounted exactly into the corner on a vertical wall and touches the 3 walls with its body...

Depends on the size of the room, available lenses, sensor size, resolution, lighting, mounting height, ceiling height, what you're looking for, and a lot of other things.

There are some pretty easy ways to do calculations.

I've used some "normal lenses" for certain rooms, and super-wide angle lenses with rectolinear correction, both with good results.

Just depends on the situation and your ability to analyze the data before you order parts rather than after.