Can You Wire Two 12vac Wall Warts In Series To Make A 24vac One?

In theory it should work, I think. The power(va) should be the same as one of them.

Wiring the secondaries in series since the primaries will both be in the same power strip.

Is this common practice?

i'm posting undisclosed so I can act unperturbed by any patronizing contractor comments, typically starting with "Do it the RIGHT way..."

Of course them not being identical could cause several problems, mostly revolving around section 16 of the Canadian Electrical Code, but how much out of phase do you suppose they could get and why?

I think Bono said it best when he said "Two warts lead as one..."

But it would be much easier to maintain phase within a single transformer than between two, especially if they are not identical.

That's for the video. RS422/485 can be run up to 4,000 feet over most twisted-pair cable. Although the spec usually points to 24ga UTP, similar distances can be obtained with 22/2 and Cat3. I've never totally tested the theoretical maximum but have run RS422 at least 2,000 feet over CAT5e.

Carl, you are right, but the same principles apply.

Michael, I believe that article assumes that the two windings connected in series would be within the same transformer.

Regardless of the theoretical possibility, we must consider electrical code concerns.

Off the top of my head, those Wall Warts are probably labelled as Class 2 device (see nameplate/pic below). Class 2 devices have voltage/current (VA) limitations they need stay within so that you can use there more lax wiring methods. (i.e. avoiding conduit/ac cabling, electrician qualifications, etc.).

In additon, the code likely has some "intended use" statements that should be considered. 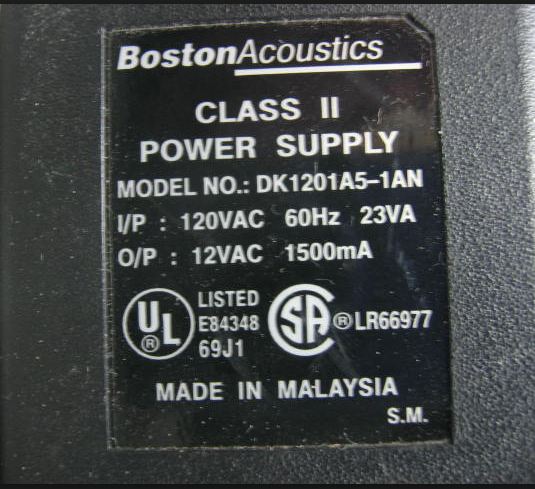 I've been told it's 750 feet by a knowledgable manufacturer's rep (yes, they exist), but I've never done it myself. The longest I've ever done it was ~600'. This was an analog PTZ, the make and model of which are lost in the mists of time but I'm guessing was a Samsung GVI. CAT5e from Dedicated Micros DVR to PTZ with passive baluns (NVT, I think) on both ends. Blue pair to the balun, green pair telemtry, orange pair spliced together for + and brown pair pliced together for - (because they look kind of like red and black) to a 24/40 transformer. It's anyone's guess how long it lasted, but it was working when I left the jobsite.

It was after-hours and I have a boat load of these adapters lying around.

My first thought was to rip out the bridge rectifier out of a 24v dc supply, but THAT seemed like too much work...(besides it would probably have more than 24v to compensate for the v-drop f the rectifier, tho maybe the RMS voltage would end up being the same, maybe Brian or Michael would know...)

So, yeah it seems to work fine and yes you can wire it out of phase if you reverse the secondaries...

But since you guys seem to be quite bright let me ask u a second question:

whats the longest distance u can run a rs485, 9600, half duplex signal on 22 gauge awg without a term resistor on the controller end. There is only a camera and a controller on the run and the camera has a term switch...

And it's after-hours again...

Here is a basic article that I found that describes the basic concepts: Transformers - The Basics (Section 2)

Section 8.1 of this article reads in part:

On the input side, yes. I'm dusty on the specific relationship, but I believe on the output side phase is affected by the stepdown transformer design and efficiencies. I know that transformed 'phase angle' will vary over time between two identical transformers, even when connected to the same high quality input signal.

I've been looking like crazy for my college electronics textbook so I'm not just running off memory here! I am very quickly going to tap out on specifics and just loathe memories of my lab oscilloscope.

If the two transformers are plugged into the same outlet, aren't they already in phase?

I know this isn't the answer you were looking for, but 24VAC plug in transformers are not that expensive at all, even brand new. $8 I think is what I paid last time I bought one. Seems a heck of a lot easier to do that.

With alternating current, this is almost impossible without special equipment. In order to 'double the voltage', not only would the supplies need to be connected in series, but the phases would need to be syncronised.

Not only does the current swing positive, but it alternates negative. (This property is in part responsible for the greater transmission distance of AC vs. DC power.)

In reality, the 'wall wart' power supplies won't be a nice 180 degrees out of Phase. It'll be something less, or even something that changes over time. So instead of nice, consistent, repeatable 60 Hz 24 VAC, you'll end up with some odd composite waveform that has two peaks of 19 VAC over a longer cycle of like 15 Hz. Not only this, but the efficiency will be horrendous, and you'll cancel out part of your desired output power no matter how efficient your supplies claim to be.

End result = a very unhappy electronic device. You can easily break the incoming voltage regulator on the camera even with ideal power. That thing gets obliterated with out of phase power within a few minutes.

It will work if you get the phasing right. Something similar is done all the time in the power industry when small increases or decreases in AC voltage are needed (using boost and buck transformers). As transformer voltages can run a little high, you might want to be sure that the total voltage provided by your two transformers combined doesn't exceed the limits of the equipment you are powering.

As an aside, I have found thrift stores (such as Salvation Army, Goodwill) to be a good place to find plug-in transformers/power supplies. They usually have a barrel of them you can sort through and can often be bought for less than a dollar.