Can I Use Both Active And Passive POE To Run A Camera Inside A Heated Enclosure?

This must be a common scenario. What are the objections to using both active and passive at the same time?

I tested using a passive injector connected directly to the POE switch and 24AC wall wart. The injector's RJ-45 plug is only pinned 1,2,3,6, the jack is fully pinned with the AC ending up on 4,5,7,8. The 6a plugs into the jack, which at the camera, plugs into the jack of a passive splitter, which splits back into AC power and a rj-45 plug pinned 1,2,3,6 that plugs to the camera.

Should I do it?

I've done this to run two cameras over one cable, but without using any fancy splitters - I just split out the pairs into two separate RJ-45 plugs at the switch (orange/green on 1,2,3,6 for one cam, brown/blue at 1,2,3,6 for the other).

Since I was adding a camera near an existing camera with no option to pull a new run, I re-terminated the run by the camera with the original two pairs going into an RJ-45 plug, and the other two pairs split out to a keystone, then ran a patch cable to the new camera.

If you have a gigabit switch, you're pretty much guaranteed to have Mode A support... a cheap 10/100 switch may only do Mode B.

I've done this to run two cameras over one cable...

Yes, I've heard of that. Of course in that case you are running Active/Active, Mode A/A.

Thanks for the info!

I dunno, terms like endspan/midspan seem a bit nebulous to me... I never use them, I just included them there because they seem to be synonymous with Mode A/B respectively. Far as I can tell they refer specifically to injectors, so inherently wouldn't have switching capability anyway.

What I have seen is a lot of cheap 10/100 switches that don't do Mode A at all, meaning they simply won't work with a 1,2,3,6-only setup. Caused a major issue for me once when we mounted some cams with RJ-45 jack tails on a radio antenna tower: because the cams were all outdoors and terminations needed pass through glands and into small PVC boxes (don't ask, wasn't my design), we snipped the jacks off, fed the wires into the boxes, then hard-spliced the Cat5e to the bare tails. The Dahua cams though, only have six wires to the RJ-45 jack: four data, and two for PoE (pins 4/5 are tied together internally, as are pins 7/8).

So picture the design: EMT strapped to the antenna pole, and this whole assembly with cameras and boxes clamped around it, then slid down to fit onto the EMT feeding the network runs up, and the splices made once it was all in place. Except once that was all done, the cameras didn't power up. Because the cheap switch only provided Mode B power on 4/5/7/8. Which we hadn't connected at all. So my partner had to go back up the ladder leaned on the pole and open things back up to tie the 4/5 and 7/8 pairs to the two other power wires for each camera.

The possibility honestly hadn't occurred to me before, because I'm used to commercial-grade switches that DO do Mode A, and it simply hadn't arisen before.

That story is definitely... twisted! 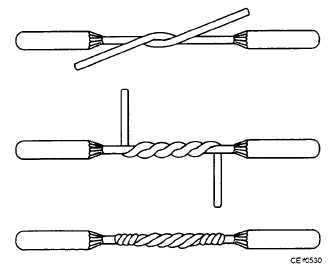 EMT strapped to the antenna pole, ...then slid down to fit onto the EMT feeding the network runs up, and the splices made once it was all in place.

Radio antenna tower, splices - talk about alien crosstalk! Category cable is pretty amazing when you think about it... Thanks...

But back to the point of the story: you can do what you're trying to do to run 24VAC heater power over the unused pairs, just have to make sure your switch or injector supports Mode A power for the camera to work :)

In this day and age, everything we do is later certified. You can buy Poe plus enclosures, which are only a little bit more. Certified jack on interior of building. Patch cable through wall to heated enclosure (-40 c needed in maine) Poe electronics, which has poe interface to the camera. We now use mostly Poe plus heated domes (stopped adding the 24 vac wiring two years ago) and Poe plus or high poe ptz domes on certified cat6 drops. There is no way most customers would allow a network connection connecting to the switch and network if they knew it was modified to carry 24vac. This must be punched down on a patch panel or keystone. Seems like the risk is too much compared to paying an extra 50 bucks for a Poe plus heated enclosure.

Using low voltage tactics like this does not work anymore on high performing Ethernet networks, especially if it is a customer data network.

You have convinced me Jeff, I will buy only POE+ heated enclosures from now on!

One question, are the enclosures guaranteed to provide the camera the af standard of 15 watts, regardless of what the enclosure does?

I used to be an advocate for enclousures with box cameras and professional lenses. Sometiimes you need this for telephoto lenses. Now I use all outdoor fixxed domes (poe+ -40 C) with auto zoom, auto focus and POE+ power. New switches coming out are POE+, so at this point, using POE+ injectors. For new installs, we make sure the switch has at least some POE+ capability. New PTZ HD 20X cameras rated to -40C with POE+/Hi POE (and < $1000 our cost) so this is becoming an option over the tele lenses and box cameras. The case for the box enclosures was precise focus and alignment. Now we can auto focus.

We have had some problems with switch/class negotiation from POE enclosures (remember, there are electronics in their that must negotiate for power with switch). If you consider the few that we have had installed, this is not a good percentage. As far as 15 watts, my problem is that for low temperature ratings, I want watts (direct conversion to heat), so a box enclosure with all of the space inside of it, exterior surface area, and lack of insulating R value, I have doubts that < 10 watts can do much good, except for defrosting of the glass.