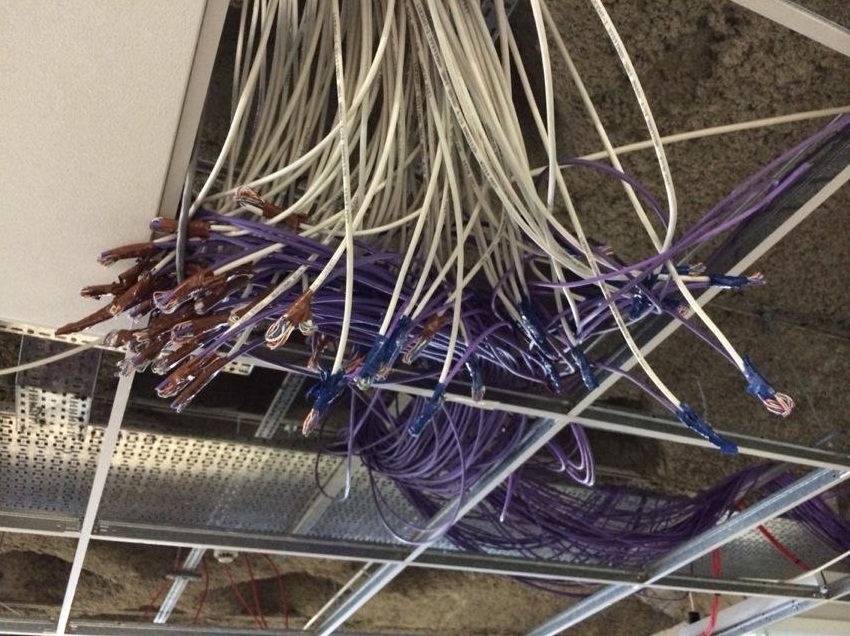 The things that really confuse me about this nightmare mess:

1. Are those splices legitimate?

2. There is a cable raceway track literally touching this mess, why not use it?

It is really difficult to know what's really going on here, but whatever the story, I'm wagering it's off to a rough start.

Am I just being a snob here? Does this look okay to you?

Looks fine to me. No worse than my old job... 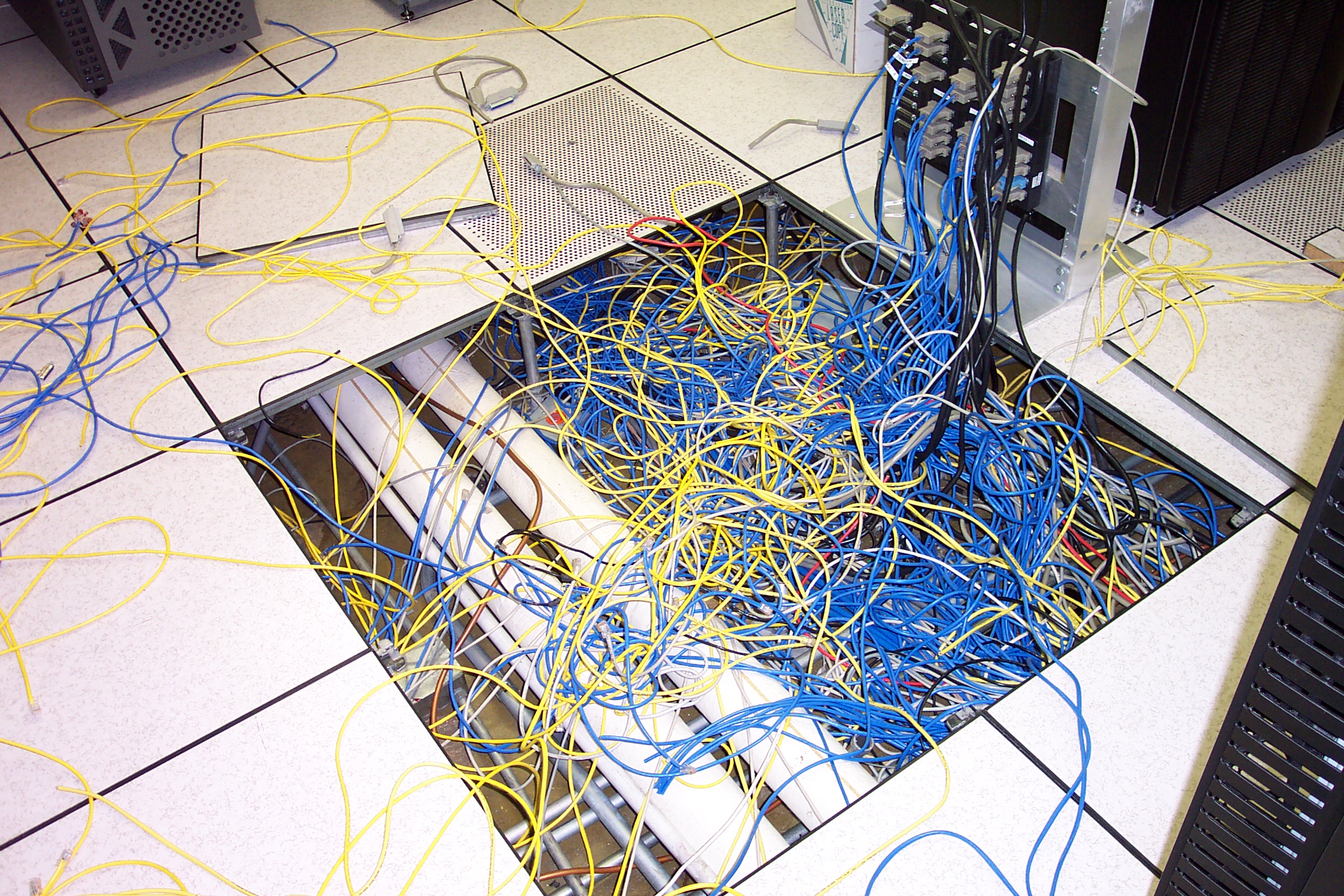 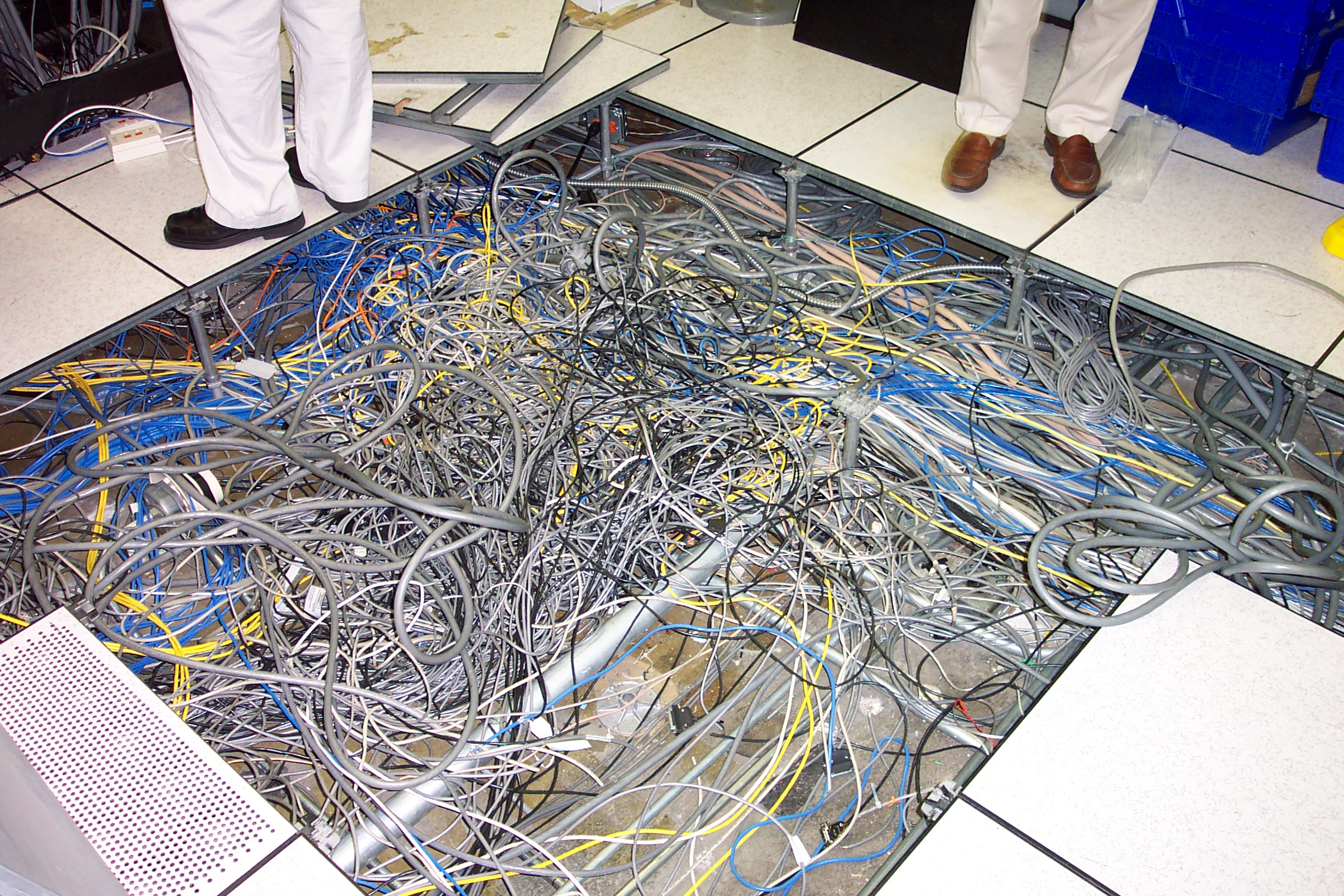 No way! You have to be kidding here.

No, not really [kidding]. 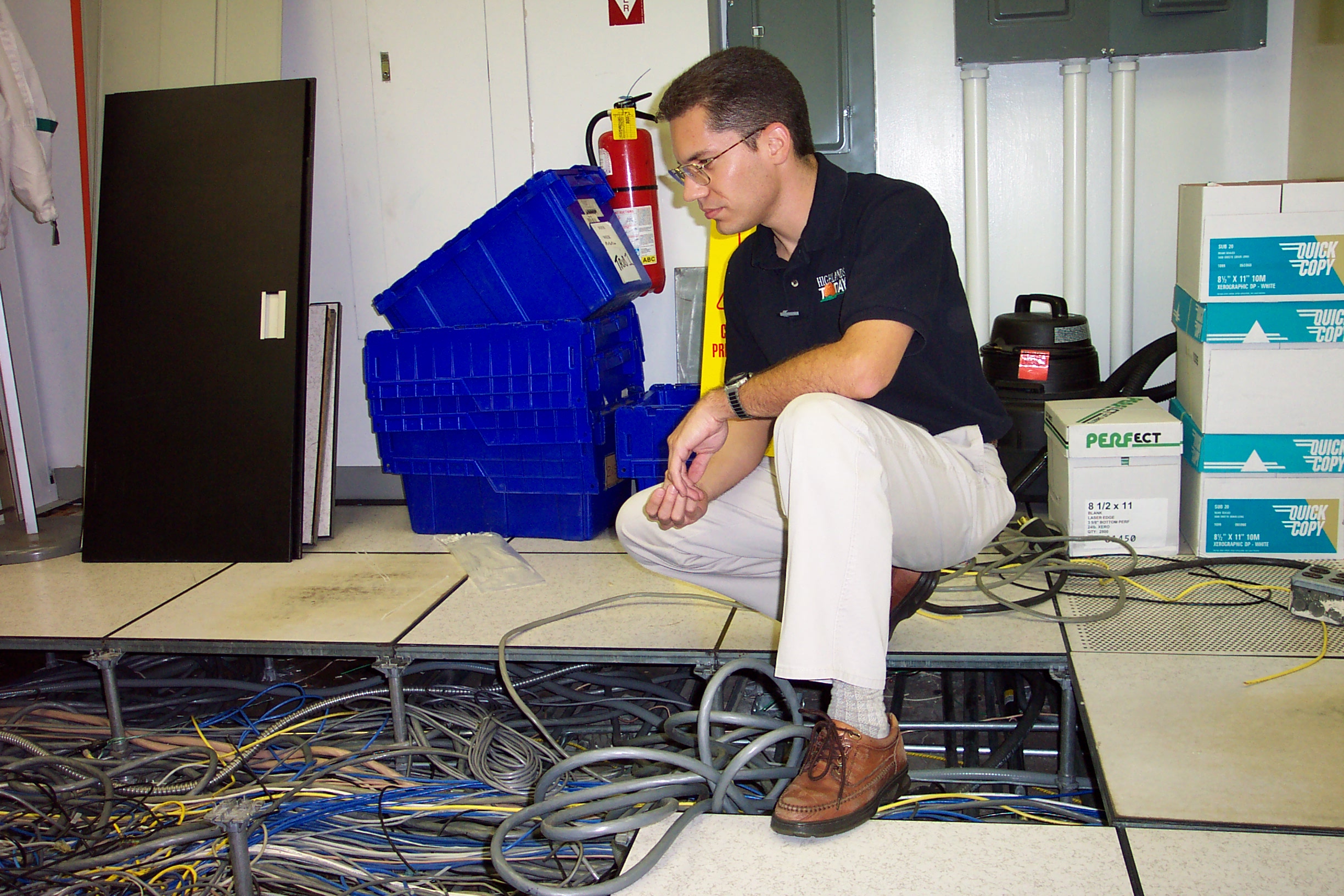 (I know it may look like a Photoshop image, kinda does to me, but that really is me with me straddling an open portion of the floor.)

That's years of unplanned network growth and lazy techs who took the shortest path. It actually only takes a small start to get like that, then anyone else who comes along later it becomes a matter of "what's the use" and does the same thing.

I can't speak to the splices, but you are correct in saying the ceiling grid should not be used for support of any cabling.

Also, contrary to popular belief, fire alarm cables do not have to be red, only that they be readily identified. (NFPA 70:760.30)

In fact, here's some in BLUE.

This is from the standpoint of the NFPA Standards when referenced by state and local codes. If the state or local jurisdiction does not reference NFPA 70 (the National Electrical Code) or amends it, your mileage may vary.

Finally, some AHJs (Authorities Having Jurisdiction) may enforce local "customs" as if they were legislative codes when they are not.

Since we're comparing war stories, here's one of the worst MDFs I ever worked in: 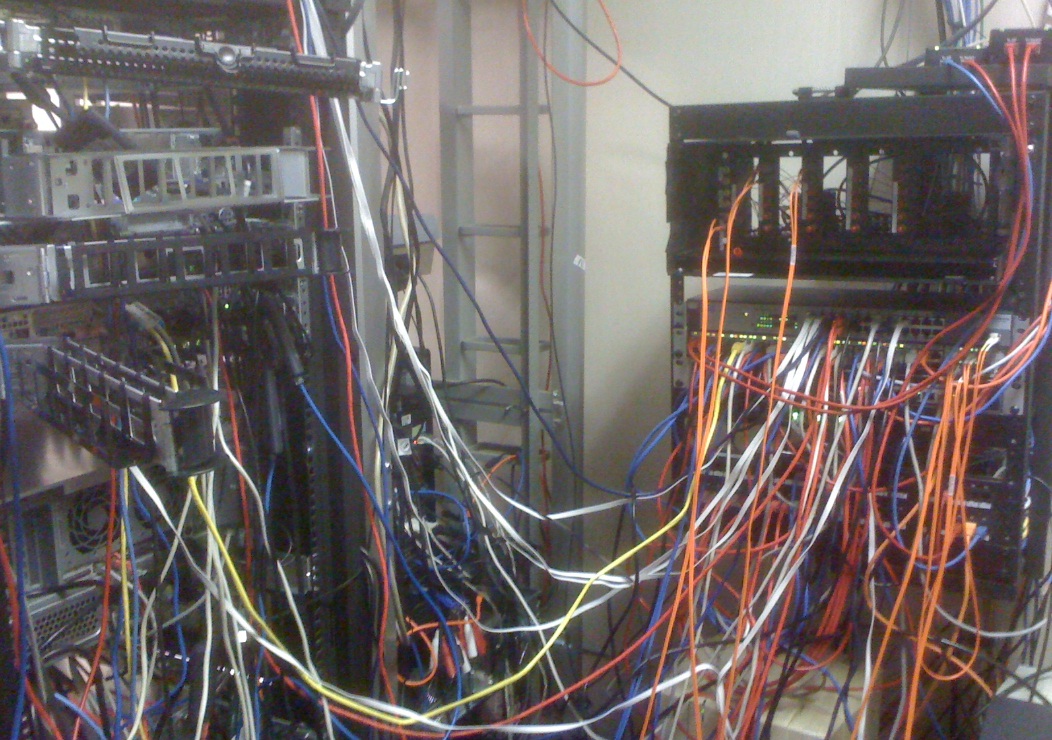 So that's where the Bosch NVR ended up...

I've got a similar situation, but it is lazy electrician hell!!

I'll have to get a pic of this attic space I'm working in at the moment. The friggin' wiring is everywhere....on top of the ceiling joists so I have to step directly on top of the wires and diagonally in every direction across the void so I have to crawl through it like a spider web. It's a labyrinth of 120v, 220v, phone, and previous CAT5 cabling all snaked together. Not even gonna get into the open junction boxes right where you have to crawl. It's a workout just getting back and forth, let alone doing my work.

I've seen worse.... as Luis says, it's usually the result of gradual growth over time, a bit of laziness here and there, eventually morphing into "f*** it" for late-comers when it becomes clear there's no point in trying to untangle the mess.

We've fixed a few of these, too... usually involves a full shutdown and overnight shift for at least two guys, for just the smallest jobs. I wouldn't even want to think about what it would take to fix Luis' picture.

As for the first pic, that looks like gear was moved sometime well after the original installation (the blue cables, based on how they split out in different directions) and the white cables extended to reach the new location... there are certainly cleaner ways to do it, but my bet is this second installer was in a time crunch and just had to get it done "by any means necessary".

Fixing our problem was actually easier that it looks. A lot of it was old terminal wire that was since replaced by PC's. Another reason there was so much wire was almost everything was home run in the 3 story office building to the computer room, going back to the terminal days. We eventually got the idea to decentralize more of the ethernet switch locations, pushing them out to the different floors on different ends of the building (the edge). So then you only had a couple lines per IDF going back to the computer room instead of 1 or 2 dozen. This was early 2000. I estimate we carted out several hundred pounds of wire or more by the time we got done and it was a lot cleaner afterwards with not too much downtime.