Because putting cameras in every corner is not feasible, would it be cost effective to have the security guards push live video from their device on person to the wireless backhaul and into the VMS, real time? Any examples of this happening currently?

My thought is that guards many times respond in areas and witness activity that is not covered by fixed video.

With Aruba WLAN (recently released .ac), the possibilites seem there however actually putting it into practice is another story. What would be the limitations and/or holes in the solution?

Thanks for any feedback! 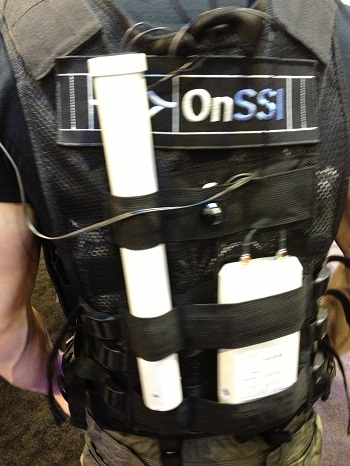 Please don't get me started on this vest. I am not sure the point of it, given its extreme bulk, complexity and cost. If this is for a shopping center, just give them low cost Android phones and have them turn on the VMS app when needed.

Perhaps something like this? Even has Milestone Xprotect integration. Seems to support live streaming. This demo video is a bit rough, but interesting.

Another option is a wearable camera (no wifi), that the security guard uploads video at the end of his shift. There is an IPVM article about law enforcement using these devices.

The smartphone idea would be inexpensive, but having to hold the camera while dealing with an indicent may be overly complex. A wearable "hands free" camera seems ideal.

Here is the article Aaron mentioned: Police Performance Massively Improved by Surveillance and here's some other reading too Body-Worn Surveillance Overview.

Aaron, do you know if the Darim unit is still being offered? I remember when it was first announced 3 years ago but have heard nothing about it since. Also, the website looks to have no updates in almost 2 years. That said, I do like the form factor as it's small and nicely designed.

As for the smartphone, if the guard is required only to 'observe and report', than it might be fine.

The Darim unit appears to be a rebranding (or VAR) of a discontinued Motorola PVE400. I didn't see anything on the Motorola site that would appear to be an upgrade/replacement. Looks like they just abandoned the product line.

There's no reason that a guard couldn't start recording on the phone and then clip it to their shirt or put it in their chest pocket if they need hands free, either. I actually have a friend that records kayak runs this way. Obviously not the same application, but it's much more movement, and comes out fine. It will suffer from the same main drawback as other shirt-worn cameras, which we covered in the body-worn overview, in that the guard has to stand head on in order for it to record.

One day, someone is going to make an Android-based low-power device with a wearable camera for this, and it'll integrate with those VMSs running these apps...one day.

Here's a couple of ways to quick mount a smartphone:

The police department where I work has used the VieVu body cameras for the past three years and we are quite happy with their product. The model we use is no larger that the old school pagers, easily clips to the shirt and is almost fool proof in operation. The video is HD, the audio is excellent and the case is very rugged and water resistant. The software for downloading and review is simple and has multiple authorization levels for access and transfer of files.

A pretty well respected company in the LE field and reasonable in price. I really can't think of any reason to have all the extra components and power needs of a live feed as even if a supervisor was to monitor the action live there would be little time to influence the outcome in real time. It's much cheaper to hire and train properly and use the cameras as a way to promote better behavior by all parties and have the documentation for a liability purpose if needed later.

Mark, thanks for sharing your experience with Vievu, good to know. I've seen them mentioned in a NYTimes article before but had not heard from anyone using them.

Good eye, though how do you know the OEMing is not the other way around? I don't know either way but usually big companies like Motorola rebrand products from smaller Asian companies. What is interesting about the Motorola version is that it includes an interface to their mesh wireless.

The body-worn camera segment still has room for improvement. The Vievu product looks robust, but the resolution is SVGA, 4 hr recording, about $900 each, ugly, bulky.

Take a look at the extreme sports side of this market and you will find something like the HERO3. This is geeky looking, chest mount + camera is about $350. Has 1080p video, WiFi features (although unclear if streaming - definitely not streaming to a VMS). 3 hr battery life.

There is also a helmet mount camera for firefighters. Claims to perform well in low light.

For a security/law professional the Vievu is definitely the way to go, but there is still lots of room for improvement. Don't mall security guards have at least 6 hour shift? Ideally the camera would hold 1 shift's worth of video on a single charge, downloading it during a break seems awkward. The SVGA resolution is probably fine, although the HERO3 has much higher quality & resolution. The non-editable video on the Vievu is great for court.

I'm thinking about my security staff. They don't use cameras, but they use radios. They pick a radio up at the beginning of their shift, use it all day, and then put it back in the charging station at the end of their shift. I'd like to see a product that would last all 12-16 hours of their shift (ya a long shift - not a job I'd want). While charging the units could automatically download the video and be ready for the next day.

The WiFi features on the GoPro primarily are useful in 'remote control' of the unit. There is an app interface or a wifi connected remote.

Well, the 4 hour recording time has been quite sufficient for our Officers who work 10 or 12.5 hour shifts. The are not required to have it activated the entire shift. Agencies have various policies for the activation but generally speaking it's only when directly contacting someone. It would be quite invasive to an employee to require the camera to be on at all times.

I have both a Hero and Vievu and can say that for security purposes the Vievu unit is not bulky and easily clips to a shirt. For a helmet mount, the Hero would be OK but you wont find security or police officers wearing helmets unless it a Tac situation which would be a veyr small % of time. And for wireless, just my opinion but the extra weight and power drain is an issue as well as the need for anyone to view a situation live vs recorded. As for the image quality between the two units, the Vievu has more than enough detail and perhaps they will bump to 1080 down the road.

Aaron, thanks for sharing. The FireCam looks particularly interesting and it's inexpensive, though it reminds me a little of a hardened vehicle dash cam.

Btw, the other 'cop cam' that is being marketed heavily is the Taser Axxon Flex. Their marketing video below:

We haven't investigated it yet. They claim 12+ hours of battery life though VGA only as well.

Taser makes a great product with or without the Cam attachment. Slight problem, you need to have your Taser out and pointed in the general direction of your target to fire or record. Most citizens or shoppers wouod not appreciate having that pointed their way. Trust me on this..................

Did not know Taser came out with the Axxon Flex. I has the "Tactacool" factor with the Oakley sunglasses and it should be a realiable product based on their product history. Their choice of product name is a bit odd though and remindes me of the Aeon Flux Sci-Fi program but perhaps that was the intenn.

This upcoming, rugged Google-Glass alternative, might be interesting for the law-enforcement and security professionals: Recon Jet

There is also this one, specifically targeted at law enforcement, but IMHO is too bulky: Golden-i Police Pro

One of the videos on the Taser site suggested their older model of the Taser Axxon Flex was $2,000. The in dash cop cameras run $7,000. Seems a bit expensive for the in dash camera by today's standards.

I'm thinking to myself: Is it more expensive to place fixed cameras in all the outlying stores (say $1000 each). Or to buy a $2,000 body cam for each active security guard? Probably less expensive to buy body cams. However the fixed camera might capture the activity leading up to the incident. Wouldn't the store want their own camera(s) for loss prevention?

Aaron, Philadelphia is running a program to subsidize store owners to do just that - put more cameras looking outside their stores. I think that's actually pretty clever though obviously the downside is that it does not guarantee the coverage needed for specific calls / responses / incidents.

As for the new Taser Axxon Flex, I've seen a number of sources say the price is around $1,000 or a little higher.