We have gotten this question a number times - What is the best motion detection camera for a home security system? In other words, what cameras is the most reliable / accurate in generating alerts based on motion detection?

What is tricky here is that, for home use, people are rarely going to spend on professional video analytics (i.e., it's hard to justify VideoIQ at your house unless you have serious security issues / are quite rich).

I do not have any experiences with home / budget cameras / systems where motion detection was accurate / reliable, certainly when aimed outdoors.

Anyone with positive experiences with inexpensive home quality motion detection?

I've used the DCS-930L from Dlink. The motion detection can email a snapshot on alert. I know the motion detection works because I used it on vacation and got a ton of pics e-mailed because the cat triggered it 10 times a day. This is not an outdoor camera though I suppose it could work if only pointed outdoors, at a small FOV, like a small porch to detect trespassing or maybe at your welcome mat, then in a year you would have a nice slideshow of NY Times cover pages.

BRS Labs on the other end of the spectrum, is threatening to bring military grade exception based analytics into the home; BRS is apparently not content to simply rest on their competitors laurels any longer...

Please keep this discussion on outdoor motion detection. It is far far easier to do indoors.

Let's ignore BRS Labs, as mentioning them in this context is likely to confuse people who are not aware of their sordid history.

The fact we're talking 'home' quality gear makes this question a little awkward coming from the commercial space, because there is typically a step down in performance.

With that said, these Movement Tracking LEDs / Camera combo units are popular in my neighborhood:

They aren't integrated with any alarm system, the cameras don't send out alerts and are pretty lousy in low light, and of the ~15 units my neighbors and I have installed over the years, maybe 50% of the cameras still work as advertised after 5 years of weather and exposure. (The lights still work, the cameras break.)

The fact the light turns on and moves in total darkness is the best feature, in my opinion. When combined with a standard fixed surveillance system, the triggered ambient lighting alone serves to spook the riffraf and result in better quality recorded segments.

Any additonal options out there? I have yet another exec asking for guidance. Although he could easily afford AXIS cameras I doubt he will want to pay that much.

I have good experiences with cameras that integrate PIR motion sensors in the housing, ie Vivotek FD8135H and similar: 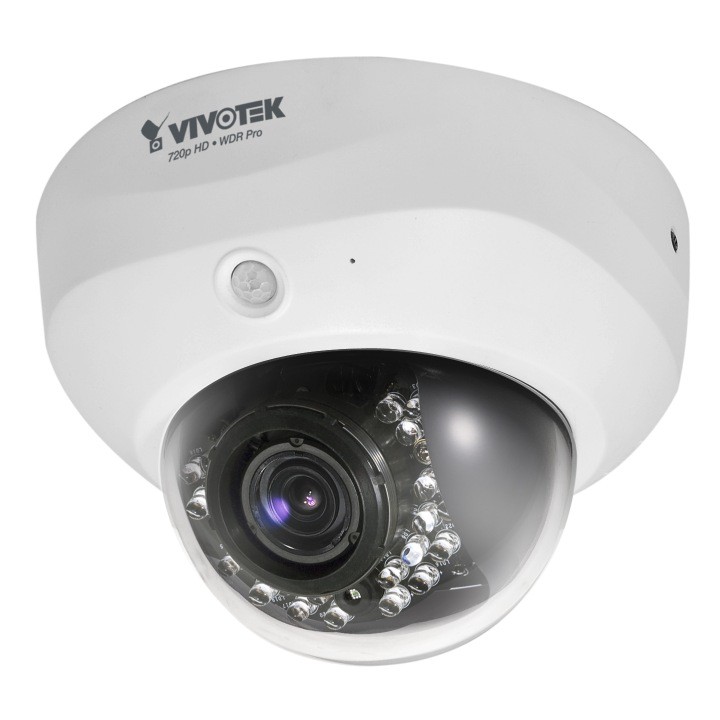 The PIR sensor detects movement where video-only detection might miss in low light. VMSes should use camera-side motion detection to take advantage of this type of feature.

I've not used or tested this particular camera, but street pricing is in the $450 range.

IMO, it's as much or more about expectations as it is about technology.

You're not going to find any motion-based camera that is going to give you the range and accuracy of the VideoIQ/Avigilon technology. Some may appear to have range, but at the sacrifice of excessive false alarms.

Howver, for a lot of residential applications you don't really need to cover 30,000+ sqft with a single camera. You're mostly looking at area like upper driveway, front walk, back deck and so forth. If you take that approach, then you can do motion based on larger objects or high-percentage (depending on the exact systems).

What I would look for is a camera that let's you set motion masks, not just overall motion percentage, with some flexibility for what you look for in that area. The Avigilon cameras work good in this case. I've also seen mobotix work good. Mobotix doesn't have the wide VMS support or ONVIF/etc., but that's less of a concern for most residential users. I'm sure there are lots of others as well, I just don't have first-hand familiarily with them.

You're not going to find any motion-based camera that is going to give you the range and accuracy of the VideoIQ/Avigilon technology...

Why not? Are you just saying that Video IQ is the clearly the best out there right now or do you mean something else?

Part of the problem in this segment is that there aren't clear definitions around some of these terms.

John started out essentially asking about motion vs. analytics, indicating they are two different things. I happen to agree that motion and analytics are two distinct categories of cctv featuresets (among many others).

Motion is easy, relatively speaking. It's practically free these days, lots of cameras have motion detection, many times with simplistic filtering like size or shape or location in the field of view. Motion, advanced motion, etc. does not try to present any real understanding of what it's looking at, it's basically just a filter with some set of parameters.

People frequently think of analytics as "super motion", which leads them to think of it as a "super detector", and we see this in demo videos sometimes. But, IMO, analytics is more about what you ignore, what you don't alarm on. Showing what you detect without showing what you ignore isn't much of a product testament. A true analytics system is trying to give some determination about what kind of object an apparant blob of motion might be, or even if it's an object at all vs. just a shadow or patch of grass.

I am not saying VideoIQ is the "best", but I am saying that the "best" motion detection will not come anywhere near true analytics in terms of coverage range/area and also accuracy of alarms over time. I'm also saying, much like John, that you might not need that level of sophistication at the typical residence. If your expectations are set correctly, a better motion-detection camera with a limited FOV or limited motion area might give you acceptable results.

If you keep the motion-detection area limited, you're going to eliminate a lot of false alarm sources by simply making them out. This means you get less coverage per camera, but given that a motion detection camera might be cheaper than an analytics option, and you probably only need a couple of channels, this works out in residential applications.

In commercial sites, that usually doesn't work as well. You want (or need) to get more coverage per camera for budget reasons. You're often monitoring areas near public spaces, so you have more potential sources of false alarms. In that case the analytics system can become more cost-effective because you have less cameras, more coverage, and better ability to deal with the problems that come with that scenario.