Gizmodo, best known as the guys who bought and published details about a prototype of an iPhone 4 well before it was released and the guys who walked around CES with a zapper that let them turn TVs off at random, just ran a glowing profile of Avigilon.

I can't wait to see next week's profile piece!

BTW, as we discussed in this topic, there physically is more to the micro dome than only the dome. Of course, the gizmodo fluff piece doesn't mention this fact.

"Counterpoint: we got headbutted all the time when we were kids, and I hardly warble dibble blerzh"- Some HDCCTV shill

According to this report, "an individual post will run $12,000. Minimum activation cost is $50,000." I am not sure of the value but the cost strikes as about what a major publication would charge.

It's at 4,000 reads right now. I am curious what it gets to. 4,000 is great for security trade magazines. On the other hand, Gawker readers are not a highly targeted group for surveillance purchasing.

Btw, sponsored content is not much different than what many security mags do - though with them it is often more underhanded - an indirect pay for play.

Interesting, Gizmodo has the article teaser pinned at the top of their home page.

You realize you're playing into their hands by driving traffic to the article, right John? Just sayin'... (FWIW, I usually copy the link and then paste it in a new browser tab in things like this, rather than clicking directly through, so it doesn't show a track-back to the source website... if Avigilon knew you were sending people to read about them, they'd probably crow about it incessantly)

BTW, I assume these have a separate interface module similar to the Axis P12 series? I guess our old pal Todd will use this as yet another example of the death of IP video... you know, because the camera section and its interface aren't using IP to communicate...

Yes, it has a separate interface module that even Avigilon dealers acknowledge creates its own challenges during installation as the 'golf ball' is permanently attached to the 'pez dispenser'. See discussion on Avigilon microdome here. 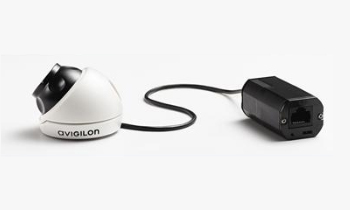 As for playing in to their hands, blame Ari!

That said, this year, there has been more than 100,000 reads of IPVM posts with Avigilon mentioned in the title - three most popular - Avigilon Dirty Tricks, Avigilon Admits Ad Not Actual, and Avigilon, Is This Ethical?

Actually, I’m thinking about sending this article out to at least one of my recent prospects as sort of a ‘Hail Mary’ type of approach. "Hey...check this out!" Plus, the article depicts how innovative Avigilon is with their dedicated development resources and forward thinking.

Similar to the iPhone and the Nest Thermostat – things like this catch people’s attention. It just needs to have average to slightly above average image quality to win people over.

Update: it's at 11,534 views this moment, after 2 full days. Ultimately, it depends how much they paid for this, but ~11,000 weakly qualified views is not much at all, especially since Gizmodo gets tens of millions of visitors per month.

The Onion, and this is not a joke, is now offering sponsored content, just like Gizmodo. Could be another good opportunity...