Working on a bus implementation. Implementing Seneca Xvault w/ built-in 8p PoE switch. Cameras are mostly Axis M3114-R in the 2mm variety. The regular M3114-R comes in either RJ45 or M12. The 2mm variety only comes in M12. Whatever... We had nice factory M12 to RJ cables made up, went on our way.

What we've found is the embedded PoE switch (a JetCard 2215) built into the Seneca only appears to support Alternative B of the 802.3af standard which is the crappier (IMO) option where it uses the unused pairs 4,5,7,8. It doesn't not appear to support Alternative A, which most things do, which is more like phantom power, leveraging the same pins as the data (1,2,3,6). Since the M12 is only a 2 pair connector... no go. Explained all this to Seneca this afternoon... they are processing the info, we'll see what they say.

This is a little bit of an odd one but thought I'd pass it along.

Might be easiest to just add a small switch or replace the PCI card in your pc with this one.

Jeppie, thanks for sharing. This has been an education for me!

Here's a diagram for other readers looking to see the difference between A and B:

According to a TI article in EETimes,

"It is important to note that, according to the standard, it is not allowable to implement both in a PSE, but necessary as a practicality to accept both in a PD."

Your embedded PoE uses B but not A (which is consistent with the statement above). Your power devices, like an IP camera should support either.

When you say 'crappier', the specific issue is that the cable from your camera only has 2 pairs but the PoE switch requires 4 pairs with the second pair carrying the power, correct?

Does this imply that the Axis camera is not truly/fully PoE compliant since it will only work with Alternate A?

Either way, it seems either the cameras or the switch needs to be changed.

08/03/13 11:57pm
If all of this data is correct, you're correct John that it wouldn't be compliant. I would guess this is a cabling issue, or 568A/B switch up. Are you using the Axis supplied adapter? Or did you actually have your own cables made up?
Reply

My intended use of “crappier” (technical term of course) applies to the Alternative B in general. It’s been years since I read the 802.3af standard and/or supporting history so I am sure there was a reason for alternative B to exist but it is inferior since Alternative A works for all instances (that I’ve ever dealt with anyway). It’s perfectly viable to run 10/100 Ethernet over 2 pairs so the idea of implementing your PoE in a manner that supports that, which is Alternative A, just makes sense to me. It is popular to do 2pair anymore? Not so much, but in years past (which 10/100 is largely the past anyway) it was not unheard of to run it over 2 pairs largely driven by connector use, connectors considered oddballs by today’s standards. After all, lots of folks have only ever messed with RJ45’s in the data world. Much less things like 110’s or in this case M12. (Though the M12 isn’t necessarily old, just specialized)

The camera electronics do support both Alternative A & B but as a whole, when using the M12 connector (these are pigtail cameras), since it only has 2 pairs one could say it really doesn’t support both. I’d want to re-read the actual spec before I called it not compliant, but I believe what you said is correct that is really isn’t complaint if it (the camera, the “PD”) doesn’t support both and technically because they force that pigtail... it doesn’t. 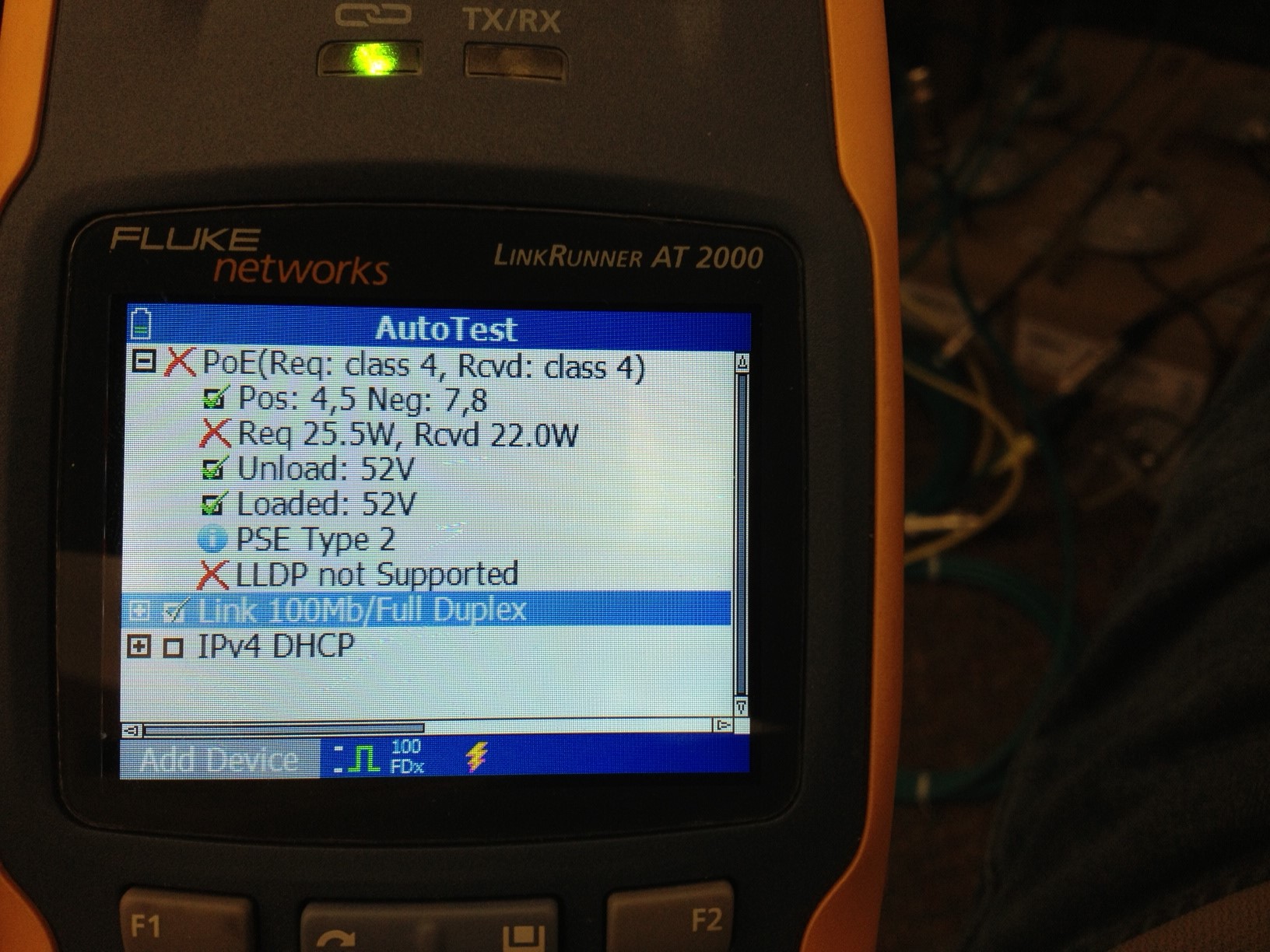 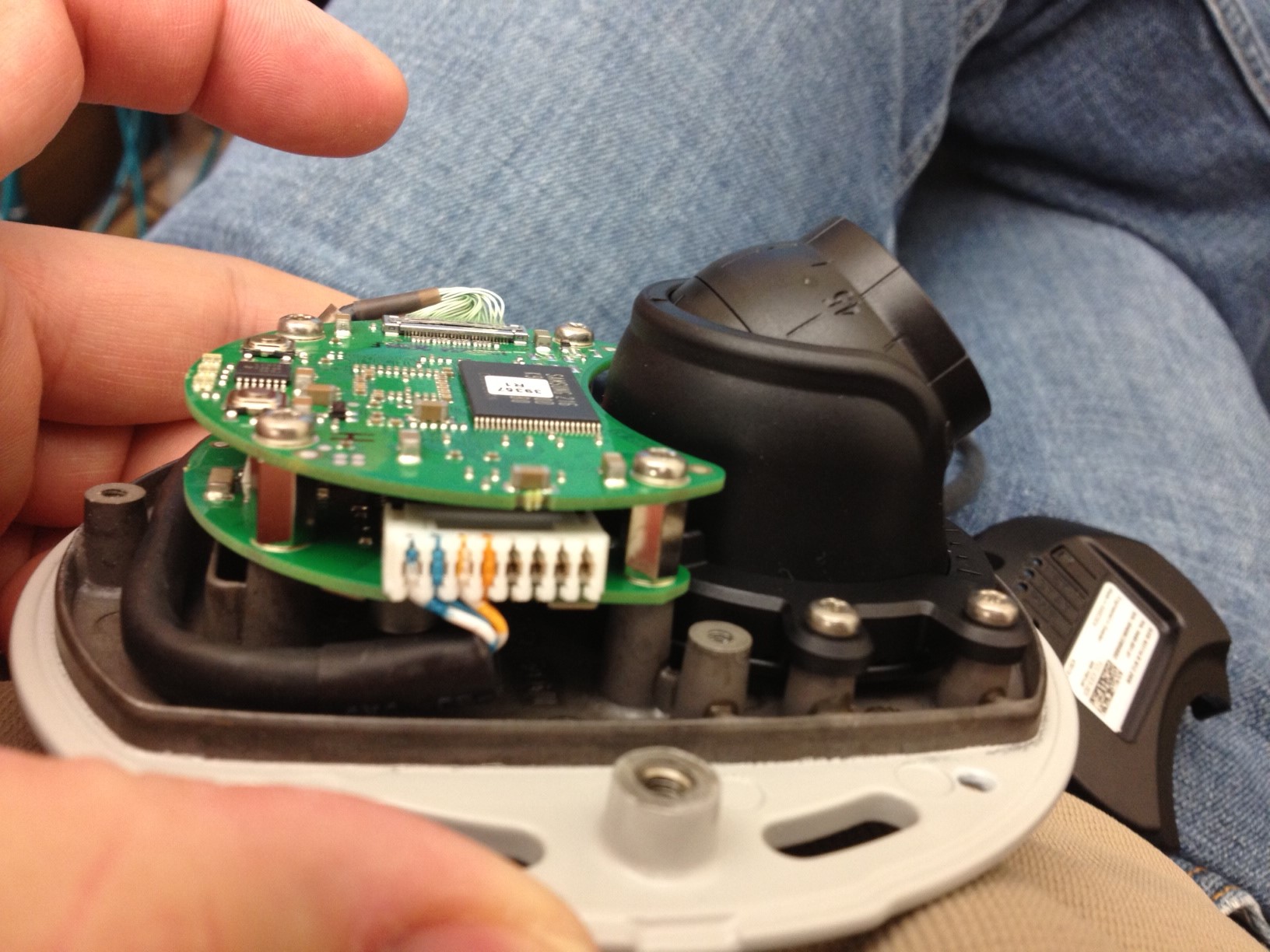 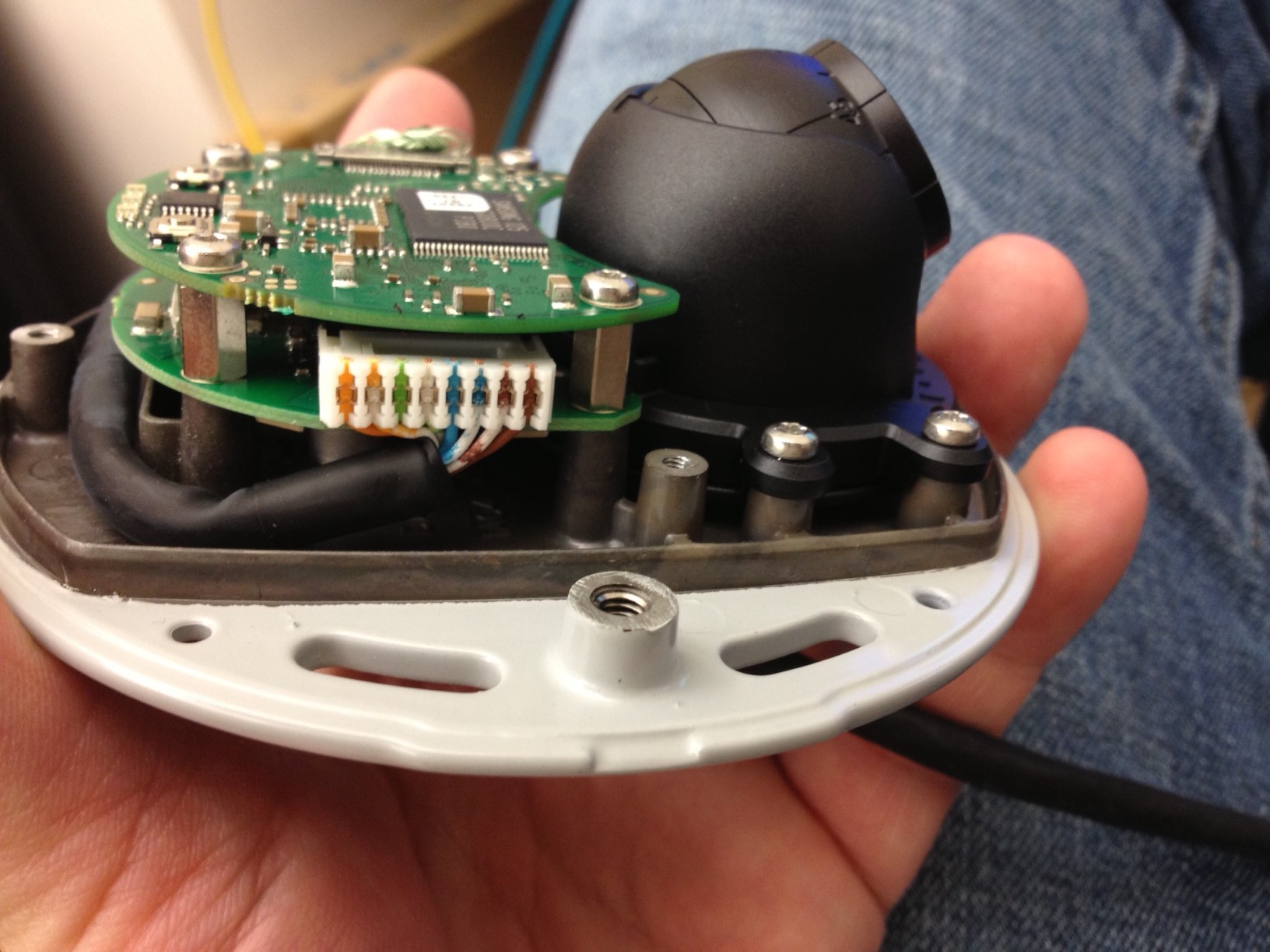 Depending on the point of view, it’s a (cameras) 2pair versus 4 pair issue or (switch) it would just make sense to support Alt. A instead of messing with Alt. B. So in a way you could say it’s a 568A/B issue because those standards are commonly referenced for their 8 conductor pin out info, and if I had 8 conductors I wouldn’t have a problem. But you couldn’t really say it’s and A versus B issue because, as far as that 8 conductor pin out is concerned, that really just a crossover assuming you were implying one end was A and one end was B or something like that.

To answer your questions the cables we were using are one we had made but it’s a moot point. The cables work fine for what they are. Since they are just 2 pair cables they just have to have a PSE that support Alternative A. I am not using Axis’ adapter. That’s just going do a basic connector conversation. I don’t see how it would essentially take an Alternative B PSE (switch) and make it work with a PD (camera) that, by nature of only using 2 pairs, only supports Alternative A.

We had Plans B & C for this setup but we didn’t really want to use them. The Seneca box isn’t cheap by any means but for this application the all-in-on concept was kind of nice. That coupled with it being ruggedized and supporting a wide voltage range simplified things for us and pushed us in this direction. If we’re really lucky (we’re not) Seneca might have an alternative internal switch and we can swap. If not, then yes, we have to implement another switch (possibly internal or external), or another camera, or… another pigtail but that would kill the warranty <sarcasm>so I wouldn’t do that…</sarcasm> Actually I probably really won’t replace the pigtail because I would worry too much about decreasing reliability in the high vibration environment they will be in plus we already have an investment in M12 to RJ45 cables that are scheduled to be installed next week.

Jeppie, thanks for the detailed feedback and the pictures! I've also forwarded this to both Axis and Seneca to see if they have any recommendations.

We have used quite a few PoE switches that only do power on PINS 4578. I would say about 20% of the older models are like this - newer/current designs tend to be 1236.

We have made it a passion to shame and void such PoE switches because using them means you cannot share a cat5/6 cable between two cameras (which is very useful when an extra camera needs to be added retroactively.

Axis does have a 2mm camera with an RJ45 connector, the model M3114-VE Nocap 2mm. I don't know if that would be suitable for a transportation application. Obviously the housings are different, but I wonder if the internals are the same.

I ran into a similar situation a few months ago while still working for an integrator. A sales rep wanted to demo the wide angle 2mm lens capabilities, but the only demo units we could get from Axis were the M3114-R models with the M12 connectors. One of our techs ended tried lopping the M12 connector off the cable and install an RJ45, but with only 4 wires it was tricky and it didn't work very well.

I ended up buying some M12 to RJ45 converters from L-Com, and we were able to plug them into a standard PoE switch and they worked fine without any modifications to the camera cable. If I remember correctly it was this one and we had to buy a M12 gender changer for it to work, like so: 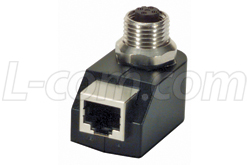 It was kind of a kludge but it was sufficient for a demo. L-Com does have quote an assortment fo M12 to RJ45 cables and converters, maybe something there will help?

Do switch vendors typically list in their data sheets whether they use A or B? I just checked a few websites and could not find such information (e.g., this Netgear Smart Switch). That said, presumably any port that supports PoE and GigE would have to be Alternate A because GigE uses all 8 wires for data, yes?

We have not come across a Gigabit PoE that is 4578 - so maybe you are right about that one John.

To be honest I had never even checked a spec sheet for this stuff before but I think Bohan is probably right and that it would be found in the hardware manufacturer (lower level) docs IF you can get them. Here is one for the card in the Seneca unit I have and it does contain this info. I did see/get this from Seneca. Hypothetically...we had to crack it open to even determine what it was.

Yes, GigE must inherently use the phantom power concept, AKA Alt. A.

Mr. Sumpter had called in to our Customer Care line last Friday (8/2) with his concern. I was brought in to the discussion soon after. We shared what we knew about the POE card that was in the system he was trying to use, which he has already posted.

Note that the POE card is a PCI card and not a PCIe card…. hence limiting the choices.

I agree with all the posters that mentioned which POE Mode a device operates with (10/100Mb only) should be available. I have asked the marketing department to update all specs related to this system to mention Mode B.

Other interesting documentation I discovered doing research on this issue are:

I reached out to our partner Axis and they directed me to this FAQ: Do Axis cameras support PoE mode A and/or B?

The current PoE standard is IEEE 802.3at which is based on IEEE 802.3af. Most of AXIS PoE PD's supports both Mode A (data pairs) and Mode B (spare pairs). This is required by both the IEEE803.2af and IEEE 802.3at standards. The only exceptions are PD devices with a M12-connector instead of a RJ45-connector.

From the PoE Spec itself:

polarity. Figure 33–8, in conjunction with Table 33–2, illustrates the valid alternatives.

A PSE shall implement Alternative A, Alternative B, or both. While a PSE may be capable of both

The PD shall be capable of accepting power on either of two sets of PI conductors. The two conductor sets

are named Mode A and Mode B. In each four-wire connection, the two wires associated with a pair are at the

NOTE—PDs that implement only Mode A or Mode B are specifically not allowed by this standard. PDs that

simultaneously require power from both Mode A and Mode B are specifically not allowed by this standard.

Thanks for the post Mike. Would you mind emailing me? Everything I posted was stuff I found and emailed to you all. I have not heard back from Seneca since the call where I reported the issue.

I just connected Jeppie and Mike via email. Thanks for the feedback everyone!

According to the Axis rep, M3114-VE Nocap 2mm is not suitable for a bus/train. Only the M31-R variable are ruggedized to withstand this type of environment. Seems like they should have given it a different model number if the internals are different, but there are alot of things odd about this model camera.