A few years ago, we set a client up with a system consisting of four FLIR cameras and a Pelco Esprit PTZ atop a 50' tower in the middle of a two-square-block truck yard... the FLIR cameras then feed into a MangoDSP A/D box coupled to an ObjectVideo v4 analytics system. The relay outputs of the Mango feed six zone inputs on an alarm panel, so that trigger outputs from the OV system send a corresponding signal to a monitoring station.

This morning we got a call from the client wondering why their system - which had had preventative maintenance barely a month ago - failed to pick up and alert the monitoring station to a truck in the yard that had caught fire and burned(!!!) during the night. Apparently the fire department told them the truck had already been burning for upwards of three hours by the time they got there around 5am... well, the recorded video showed that workers had been in the yard as recently as 3:20am and have even been in the area of the burned truck, so obviously that wasn't right. Further checking of the video showed that the truck went up at around 4:12am - the heat bloom from the fire shows up great on the FLIR!

In looking at the analytics logs, I realized why the system hadn't alerted to the fire: it simply wasn't programmed to. The original purpose of it was to detect PEOPLE in the yard during off-hours, and alert the monitoring station (workers who are supposed to be there after hours call the station before entering to inform them, and the station always has the ability to pull up the remote feed to check on activity via the Esprit). In fact, it was performing exactly as it was supposed to: at about 4:36am, another truck pulls in, and barely a minute later, the system triggers as the driver leaves his cab to investigate the fire.

Anyway (and now we're getting to the question part), the client now wants the system re-programmed to sense larger heat events... like fires (this is the first one I've heard of in the 8+ years we've been working with these guys)... and I'm not quite sure how I'm going to define that for the analytics engine, which frankly, is a pain in the arse to program anyway. I figure I could tell it to watch for larger objects appearing in the yard... it will, of course, trigger on any trucks that come in, but if there's a truck, there's going to be a person appearing shortly that will trip it anyway, so that's not really a big deal. Main problem I see is that trucks usually appear as big square blocks, whereas this one fire was... well, pretty much the shape of a REALLY BIG candle flame when it went up. It could almost be seen as a large person-shaped object, and something tells me this is going to prove extra-challenging to define.

So, any thoughts on this, analytics experts, particularly anyone more familiar with older OV? Note that these FLIRs are B&W, and trucks and people pretty much just appear white to them, so there's not any granularity available to tell the system to detect "REALLY hot" vs. just body or engine temperature.

Matt, Interesting challenge. A couple of notes: One, OV 4 is some seriously out of date software, if you are running the analytics in MANGO unit you should be able to get an upgrade to 5.2 from them. If you are running on a server you may be able to get to v6.2 ( the Edge version of 6.2 is due out in mid 2014 Upgrading will help simplify rule configuration and increase accuracy in general - however, in terms of detecting fires, that is a separate challenge. While OV doesn't have a specific fire analytic, the only thing I can think of is to use the vehicle analytic and add a size filter to filter out anything smaller than a large truck - it wouldn't alert when a fire started but it would alert when the fire got bigger than a typical truck. Not ideal I agree, but perhaps enough to satisfy the customer. Let us know offline if you need help with configuring size filters

I know V4 is out of date, and in fact, we had some serious issues in the past with rules being randomly deactivated after a reboot, something we were told was a known problem, and the solution was to upgrade to V5... at a cost. Somehow I couldn't bring myself to approach the client with the news that the only fix for their uber-expensive high-tech system was to pay even more to address a know bug. My workaround ended up being a startup script that would email me anytime the machine rebooted, so I could remote in and make sure the rules were all set.

Be that as it may, like I said, I have no qualms with setting it to detect vehicles in the yard, since the procedure has the operators contacting the monitoring station before entering, and anytime a vehicle comes in, eventually a person will appear to trigger it anyway. I'm just skeptical that the system would see a fire and a vehicle the same way, as the heat bloom is HUGE on the FLIR.

As an example, this is how the FLIR normally sees a running vehicle, along with a forklift and a couple people: 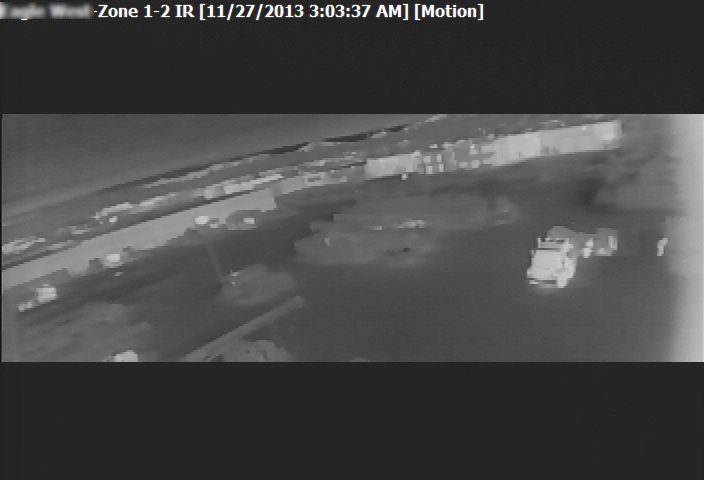 This is the truck that burned, pre-fire, for comparison: 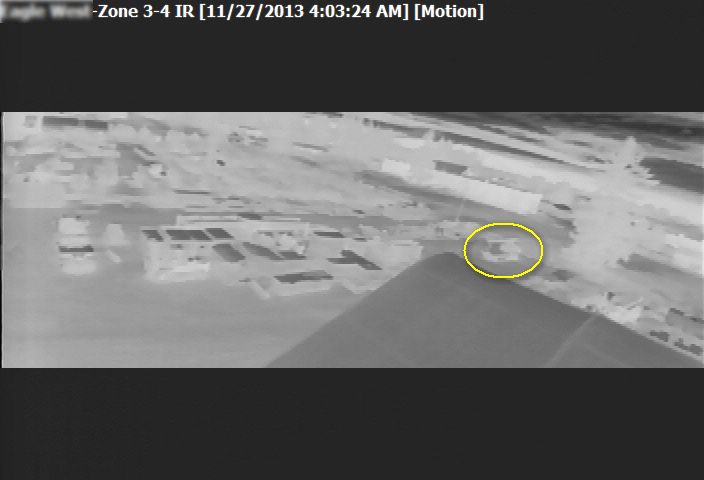 This is what the fire looked like from a panning PTZ on the opposite side of the yard (a little glare above on the dome bubble, the fire itself appears relatively small): 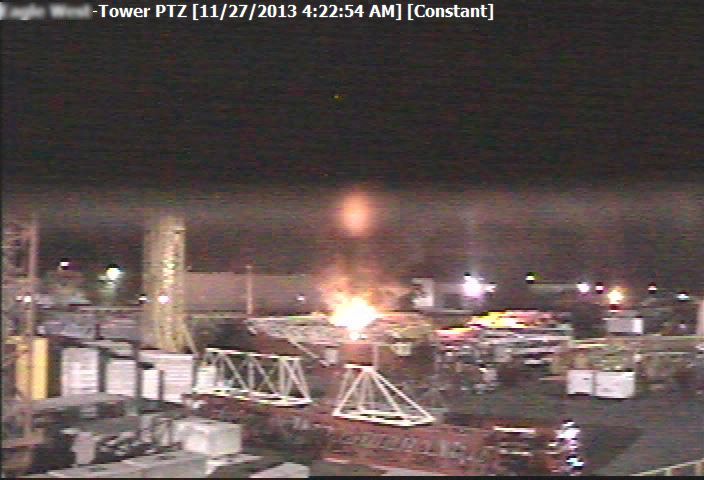 And this is how it looked to the FLIR at that same instant: 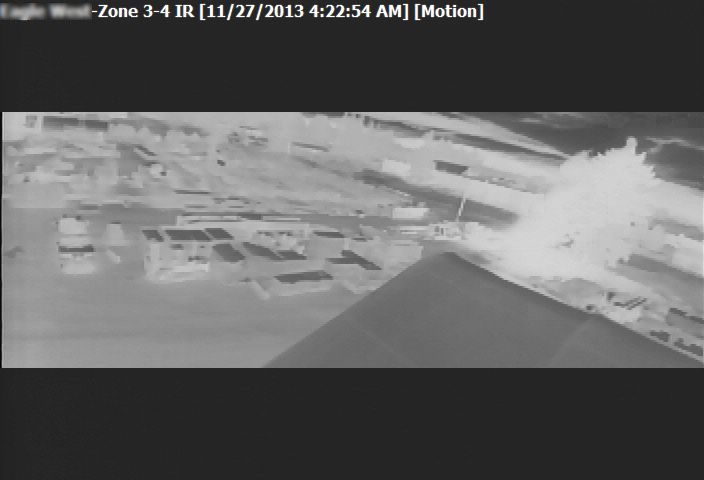 Playing back the video at high speed, there's actually a very small flickering heat signature there for quite a while before it flares up, and when it does, there's a very brief instance where the bloom is about the same size and shape as a vehicle, maybe four or five frames (under 2s)... and then it's way beyond that.

The fire actually passes through a brief phase where it's about the size of a person, but it doesn't show as being as hot as a person, and apparently the system is smart enough to recognize that it ISN'T a person, and so doesn't trigger an alert.

Anywho... I'm just thinking out loud at this point... I'm skeptical of how well this could work, and of course, testing it will be kinda tricky, as I'm sure they don't want us to burn any more trucks... all I can think of is to have a guy stand in the yard behind an object, so he's not picked up, and set off a highway flare. Any help is appreciated, though... we should be talking to the client a little later this morning to see how they want to proceed.

Warren, thanks for the help on Thanksgiving! Quite the customer support!

Matt, if you are looking to possibly propose a fire detection analytic, VCA Technology has this analytic filter. This would require an overhaul to the current setup, but it would give you a this specific detection type.

I don't think a complete overhaul will be in this client's plans. It's a case of one vehicle fire in the last eight years, so while "fire detection" is foremost in their minds right now, I suspect by the time it comes to budgeting for something specifically designed for that, it won't be so urgent relative to the cost :)

12/02/13 01:06am
Matt, One additional thought based on the photos you posted - you may be able to use a people or vehicle rule with a large size filter to get reasonable accuracy... I take your point on being hard to test....if you have the clip from the fire and some clips of normal activity- OV may be able to run them through a test setup to see the results. Though it would be against the 5.x or 6.x library as we don't have an active 4.x system running. Sorry to not have a more definitive answer for you - thanks for sharing the challenge though - gives our developers food for thought as we go forward. Warren
Reply