Here's a look at what cutting-edge home automation (security, lights, HVAC) looked like 25+ years ago, complete with touchscreen interface: 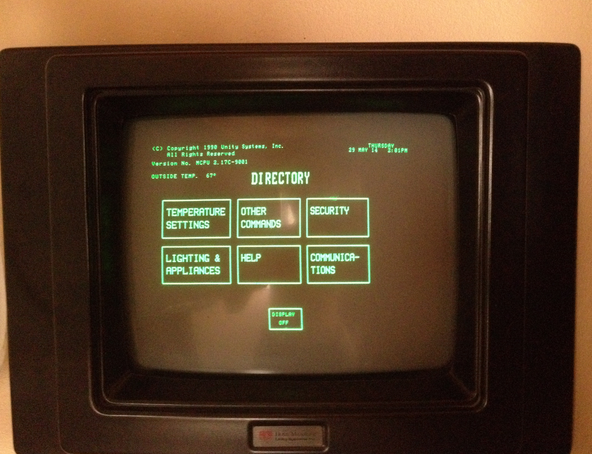 This system is fairly impressive, predating the time when PCs became common to homes. Apparently, there are even a handful of integrators/dealers still maintaining the system, named Unity Systems Home Manager.

No word on price, but I bet it was outrageous ($100:$1?) compared to Z-Wave based options common today.

Does anyone have experience with this system? 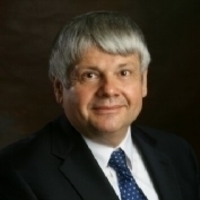 We did a multi-million dollar home back in the early 80's that had this or a very similar system. It did not integrate with our security system, but controlled everything else in the home. My biggest memory of the system was that it required the use of 30 conductor flat ribbon cables between each of the control stations - not the easiest type of cable to run through walls of a house.

Our contract for the security portion of the project was over $150K (back in 1982-84) - I can only imagine that the home automation system cost this much or more. Both our crew and the automation contractor's crew were on this site for months.

We installed electric locking devices on every exterior door of the house. We used a GE low-voltage lighting control system to control the locks. The owner had control stations throughout the house that would allow the doors to be locked/unlocked either individually, or all at once. The GE system used a stepper motor switch to lock/unlock all doors. It was pretty cool to push this switch and hear the locks clicking throughout the house as the stepper switch made its rounds. Probably would use different technology today. :)

I used to work with a guy who started in security in the late 70's, always loved hearing about the old stuff and how things used to be done. Didn't even know they HAD home automation in 1985 haha

In the 70s, they used to have single-zone burglar alarms with an analog meter showing resistance on a panel- low resistance meant all zones were closed and the system could be armed. Some of these used a deep cycle car battery for long term backup. The really fancy places had an autodialer that would call the police and play a prerecorded message from a tape reel. I serviced plenty of these in the late 90's, going along with my dad on service calls after school or in the summer (child labor is cheaper than babysitting). I've even repaired burglar alarm window foil, although I was never very good at it.

Home automation has always been around. The term was invented to describe a field that already existed.

...going along with my dad on service calls after school or in the summer... 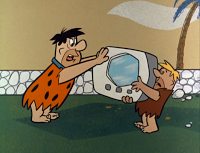